HOME is a centre for international contemporary art, theatre and film in Manchester, England, that opened in 2015. [1]

HOME was formed by the merger of two Manchester-based arts organisations, Cornerhouse and the Library Theatre Company. [2]

The centre is part of the development of a creative quarter in the city. The arts centre was designed by Mecanoo Architects based in Delft, Netherlands. [14]

HOME will commission, produce and present a programme of contemporary theatre, film, and visual art. [15] The programme will feature new commissions, international collaborations, off-site and interdisciplinary productions, with an emphasis on innovative visual storytelling and cross-art form collaboration. [16]

Meera Syal is an English comedian, writer, playwright, singer, journalist, producer and actress. She rose to prominence as one of the team that created Goodness Gracious Me and portraying Sanjeev's grandmother, Ummi, in The Kumars at No. 42. She became one of the UK's best-known Asian personalities. 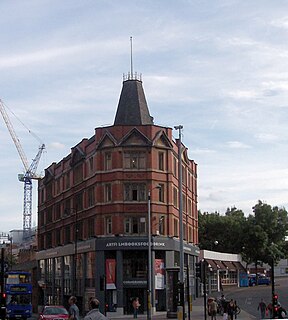 Cornerhouse was a centre for cinema and the contemporary visual arts next to Oxford Road Station on Oxford Street, Manchester, England which was active from 1985-2015. It had three floors of art galleries, three cinemas, a bookshop, a bar and a café bar. Cornerhouse was operated by Greater Manchester Arts Centre Ltd, a registered charity.

Jeremy Deller is an English conceptual, video and installation artist. Much of Deller's work is collaborative; it has a strong political aspect, in the subjects dealt with and also the devaluation of artistic ego through the involvement of other people in the creative process.

Janice Connolly is a British actress, comedian and artistic director. She runs the Birmingham-based group Women and Theatre, and performs stand-up comedy as her character "Mrs Barbara Nice". Connolly has also appeared in Coronation Street, That Peter Kay Thing, Phoenix Nights, Max and Paddy's Road To Nowhere, Thin Ice and Dead Man Weds. She has also worked at the Birmingham Rep with Roxanna Silbert as Artistic Director. In 2017 Connolly was awarded a British Empire Medal in the New Years Honours list for services to community arts in the West Midlands.

Judith ("Jude") Pamela Kelly, is a British theatre director and producer. She is a director of the WOW Foundation, which organises the annual Women of the World Festival, founded in 2010 by Kelly. From 2006 to 2018 she was artistic director of the Southbank Centre in London, a role that oversees the Hayward Gallery, the Royal Festival Hall, Queen Elizabeth Hall, the Saison Poetry Library, and the Arts Council Collection.

The Manchester International Festival is a biennial international arts festival, with a specific focus on original new work, held in the English city of Manchester. The festival is a biennial event, first taking place in June–July 2007, and subsequently recurring in the summers of 2009, 2011, 2013 and 2015. MIF17 took place from 29 June to 16 July 2017. The organisation is based in Blackfriars House, adjacent to Blackfriars Bridge but is due to move to a new £110 million new home, The Factory, by the beginning of 2020.

The Barbican Centre is a performing arts centre in the Barbican Estate of the City of London and the largest of its kind in Europe. The Centre hosts classical and contemporary music concerts, theatre performances, film screenings and art exhibitions. It also houses a library, three restaurants, and a conservatory. The Barbican Centre is member of the Global Cultural Districts Network.

Dave Moutrey is a manager and leadership professional of United Kingdom arts organisations. He is Director and Chief Executive of HOME, the centre for international contemporary arts, theatre and film formed by the merger of Cornerhouse and the Library Theatre Company. Dave is also Director of Culture for the City of Manchester, a role that he performs concurrently with his position as Director and CEO of HOME.

Walter Meierjohann is a theatre director working in Britain. He is artistic director, theatre, of HOME, the centre for international contemporary arts, theatre and film formed by the merger of Cornerhouse and the Library Theatre Company.

Jason Wood is a British writer on film and cinema. He is currently the Artistic Director for Film at HOME, the centre for international contemporary arts, theatre and film formed by the merger of Cornerhouse and the Library Theatre Company.He was formerly Director of Programming at Curzon Cinemas from 2009 to 2015.

The Tetley, is a contemporary art gallery based to the south of the centre of Leeds, England, on the site for the former Tetley's Brewery. The gallery was opened on Friday 28 November 2013.

The Factory is a £110 million multi-disciplinary arts venue currently being constructed on the former site of Granada Studios, in the St John's Quarter of Manchester, being developed by Manchester Quays Ltd (MQL), a development partnership between Allied London and Manchester City Council, and is to be the permanent home of the Manchester International Festival. It has been claimed that the name comes from Factory Records, the independent record label founded by Tony Wilson.