Ha-Joon Chang ( /tʃæŋ/ ; Korean : 장하준; Hanja : 張夏准; born 7 October 1963) is a South Korean institutional economist, specialising in development economics. Currently he is a reader in the Political Economy of Development at the University of Cambridge. Chang is the author of several widely discussed policy books, most notably Kicking Away the Ladder: Development Strategy in Historical Perspective (2002). [2] [3] [4] In 2013, Prospect magazine ranked Chang as one of the top 20 World Thinkers. [5]

He has served as a consultant to the World Bank, the Asian Development Bank, the European Investment Bank, as well as to Oxfam [6] and various United Nations agencies. [7] He is also a fellow at the Center for Economic and Policy Research [8] in Washington, D.C. In addition, Chang serves on the advisory board of Academics Stand Against Poverty (ASAP).

After graduating from Seoul National University's Department of Economics, he studied at the University of Cambridge, earning an MPhil and a PhD for his thesis entitled The Political Economy of Industrial Policy – Reflections on the Role of State Intervention in 1991. Chang's contribution to economics started while studying under Robert Rowthorn, a leading British Marxist economist, [9] with whom he worked on the elaboration of the theory of industrial policy, which he described as a middle way between central planning and unrestrained free market. His work in this area is part of a broader approach to economics known as institutionalist political economy which places economic history and socio-political factors at the centre of the evolution of economic practices. [10]

In his book Kicking Away the Ladder (which won the European Association for Evolutionary Political Economy's 2003 Gunnar Myrdal Prize), Chang argued that all major developed countries used interventionist economic policies in order to get rich and then tried to forbid other countries from doing the same. The World Trade Organization, World Bank, and International Monetary Fund come in for strong criticism from Chang for "ladder-kicking" of this type which, he argues, is the fundamental obstacle to poverty alleviation in the developing world. This and other work led to his being awarded the 2005 Wassily Leontief Prize for Advancing the Frontiers of Economic Thought from the Global Development and Environment Institute (previous prize-winners include Amartya Sen, John Kenneth Galbraith, Herman Daly, Alice Amsden and Robert Wade). [11] [12]

The book's methodology was criticized by American Douglas Irwin, Professor of Economics at Dartmouth College and author of a 2011 study of the Smoot–Hawley tariff, [13] writing on the website of the Economic History Association:

Chang only looks at countries that developed during the nineteenth century and a small number of the policies they pursued. He did not examine countries that failed to develop in the nineteenth century and see if they pursued the same heterodox policies only more intensively. This is a poor scientific and historical method. Suppose a doctor studied people with long lives and found that some smoked tobacco, but did not study people with shorter lives to see if smoking was even more prevalent. Any conclusions drawn only from the observed relationship would be quite misleading. [14]

Ha-Joon Chang has examined a large body of historical material to reach some very interesting and important conclusions about institutions and economic development. Not only is the historical picture re-examined, but Chang uses this to argue the need for a changing attitude to the institutions desired in today's developing nations. Both as historical reinterpretation and policy advocacy, Kicking Away the Ladder deserves a wide audience among economists, historians, and members of the policy establishment. [15]

Following up on the ideas of Kicking Away the Ladder, Chang published Bad Samaritans: The Myth of Free Trade and the Secret History of Capitalism in December 2008. [16] Chang countered Irwin's criticisms by arguing that countries that had failed to develop had generally followed free market policies. Chang also argued that while state interventionism sometimes produced economic failures, it had a better record than unregulated free market economies which, he maintained, very rarely succeeded in producing economic development. He cited evidence that GDP growth in developing countries had been higher prior to external pressures recommending deregulation and extended his analysis to the failures of free trade to induce growth through privatisation and anti-inflationary policies. Chang's book won plaudits from Nobel Prize–winning economist Joseph Stiglitz for its fresh insight and effective blend of contemporary and historical cases but was criticised by former World Bank economist William Easterly, who said that Chang used selective evidence in his book. Chang responded to Easterly's criticisms, asserting that Easterly misread his argument. Easterly in turn provided a counter-reply. [17] [18]

Chang's next book, 23 Things They Don't Tell You About Capitalism , was released in 2011. It offers a twenty-three point rebuttal to aspects of neo-liberal capitalism. This includes assertions such as "Making rich people richer doesn't make the rest of us richer," "Companies should not be run in the interests of their owners," and "The washing machine has changed the world more than the internet has." This book questions the assumptions behind the dogma of neo-liberal capitalism and offers a vision of how we can shape capitalism to humane ends. This marks a broadening of Chang's focus from his previous books that were mainly critiques of neo-liberal capitalism as it related to developing countries. In this book, Chang begins to discuss the issues of the current neo-liberal system across all countries.

Chang's 2014 book, Economics: The User's Guide, is an introduction to economics, written for the general public. [19]

He is the son of former minister of industry and resources, Chang Jae-sik, brother of historian and philosopher of science, Hasok Chang, and cousin of prominent economist and professor at Korea University, Chang Ha-Seong. He lives in Cambridge with wife, Hee-Jeong Kim, and two children, Yuna, and Jin-Gyu. [20]

A tariff is a tax imposed by the government of a country or by a supranational union on imports or exports of goods. Besides being a source of revenue for the government, import duties can also be a form of regulation of foreign trade and policy that taxes foreign products to encourage or safeguard domestic industry. Tariffs are among the most widely used instruments of protectionism, along with import and export quotas.

Free trade is a trade policy that does not restrict imports or exports. It can also be understood as the free market idea applied to international trade. In government, free trade is predominantly advocated by political parties that hold economic liberal positions, while economic nationalist and left-wing political parties generally support protectionism, the opposite of free trade.

Neoliberalism, or neo-liberalism, is a term used to describe the 20th-century resurgence of 19th-century ideas associated with free-market capitalism. A significant factor in the rise of conservative and libertarian organizations, political parties, and think tanks, and predominately advocated by them, it is generally associated with policies of economic liberalization, including privatization, deregulation, globalization, free trade, austerity and reductions in government spending in order to increase the role of the private sector in the economy and society; however, the defining features of neoliberalism in both thought and practice have been the subject of substantial scholarly debate.

An industrial policy (IP) or industrial strategy of a country is its official strategic effort to encourage the development and growth of all or part of the economy, often focused on all or part of the manufacturing sector. The government takes measures "aimed at improving the competitiveness and capabilities of domestic firms and promoting structural transformation." A country's infrastructure is a major enabler of the wider economy and so often has a key role in IP.

Georg Friedrich List was a German-American economist who developed the "National System" of political economy. He was a forefather of the German historical school of economics, and argued for the German Customs Union from a Nationalist standpoint. He advocated imposing tariffs on imported goods while supporting free trade of domestic goods, and stated the cost of a tariff should be seen as an investment in a nation's future productivity.

The infant industry argument is an economic rationale for trade protectionism. The core of the argument is that nascent industries often do not have the economies of scale that their older competitors from other countries may have, and thus need to be protected until they can attain similar economies of scale. The logic underpinning the argument is that trade protectionism is costly in the short run but leads to long-term benefits. 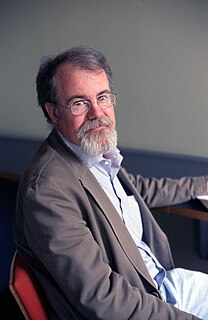 William Russell Easterly is an American economist, specializing in economic development. He is a professor of economics at New York University, joint with Africa House, and co-director of NYU’s Development Research Institute. He is a Research Associate of NBER, senior fellow at the Bureau for Research and Economic Analysis of Development (BREAD) of Duke University, and a nonresident senior fellow at the Brookings Institution in Washington DC. Easterly is an associate editor of the Journal of Economic Growth.

Socialism for the rich and capitalism for the poor is a classical political-economic argument asserting that, in advanced capitalist societies, state policies assure that more resources flow to the rich than to the poor, for example in the form of transfer payments.

Bad Samaritans: The Myth of Free Trade and the Secret History of Capitalism is a book about economics written by Ha-Joon Chang, a South Korean institutional economist specializing in development economics. It criticizes mainstream economics of globalization and neo-liberalism. Chang claims that developed countries want developing countries to change their economic policy and open their markets. Rich and powerful governments and institutions are actually "Bad Samaritans"; their intentions may be worthy but their simplistic, free-market ideology and poor understanding of history leads them into policy errors.

23 Things They Don't Tell You About Capitalism is a non-fiction book by economist Ha-Joon Chang published in 2010. The book offers a 23-point rebuttal of aspects of neo-liberal capitalism.