Last updated May 27, 2020
Icelandic strongman and actor
This is an Icelandic name. The last name is patronymic, not a family name; this person is referred to by the given name Hafþór.

Hafþór Júlíus Björnsson (Icelandic:  [ˈhafθour ˈjuːlijʏs ˈpjœrtn̥ssɔn] ( listen ); often transliterated as Hafthor; born 26 November 1988) is an Icelandic professional strongman and actor. He is the first person to have won the Arnold Strongman Classic, Europe's Strongest Man and World's Strongest Man in the same calendar year. [1] [2] He played Gregor "The Mountain" Clegane in the HBO series Game of Thrones for five seasons. He also is a former professional basketball player.

Born in Reykjavík, Hafþór began his basketball career in 2004 with Division I team Breiðablik, moving to FSu in 2005. He transferred to Premier League side KR in 2006 before returning to FSu in 2007. He helped FSu to promotion from Division I to the Premier League but his career was cut short in 2008 due to a recurrent ankle injury. He subsequently began his strongman career.

On 2 May 2020, Hafþór deadlifted 501 kilograms (1,105 lb) under strongman rules at his gym in Iceland and refereed by Magnús Ver Magnússon. This achievement was televised live by ESPN, and surpassed Eddie Hall's strongman deadlift record of 500 kilograms (1,102 lb) set in 2016. [3]

Hafþór began his athletic career as a basketball player. At 2.06 m (6 ft 9 in), [4] he started his senior team career with Division I club Breiðablik in 2004, playing as a center. In 2005 he joined FSu Selfoss, also in the Icelandic Division I. After 10 games it was discovered that he had been playing with a broken bone in his ankle and would require surgery. After recovering from surgery, Hafþór moved to Úrvalsdeild powerhouse KR in 2006. [5] He missed most of the 2006–2007 season after a screw in his ankle shattered and had to be fixed by another surgery. [6]

For the 2007–2008 season, he moved back to play for FSu Selfoss. He averaged 6.7 points per game, [7] helping the team achieve promotion to the Úrvalsdeild, [8] but the troublesome ankle forced him to retire from basketball after the season, at the age of 20. [9] [10]

Hafþór met Icelandic strongman Magnús Ver Magnússon at his gym "Jakaból" in 2008, and Magnús said that Hafþór seemed a good prospect as a strongman. [15] Hafþór won several strongman contests in Iceland in 2010 including Strongest Man in Iceland, [16] Iceland's Strongest Viking, Westfjords Viking, [17] and five of six events at the OK Badur Strongman Championships. [18]

After successfully defending his crown Hafþór became only the second person to win 3 Arnold Strongman Classics in a row (2018, 2019 and 2020) after Zydrunas Savickas.

Hafþór was cast as Ser Gregor "The Mountain" Clegane for the fourth season of the HBO series Game of Thrones in August 2013. [33] This was his first main acting role, and he is the third person to depict the character after Conan Stevens played the role in season 1 and Ian Whyte in season 2. He became the first actor to portray Clegane in more than one continuous season with his appearances in seasons four through eight. [34] Hafþór was cast for the role of Mongkut in the 2017 film Kickboxer: Retaliation.

Hafþór played the lead role in the Philadelphia Renaissance Faire during their debut season in 2015. He appeared as "King Thor", the leader of a Viking raiding party intent on capturing the city of Amman. [35]

Since late 2017, Hafþór had been dating Kelsey Henson, a Canadian waitress. The two met when Hafþór was in Alberta, Canada for a strongman competition and visited the bar where Henson worked. The couple garnered attention for the difference in their respective heights, as Henson is 157 cm (5 ft 2 in). [41] [43] [44] On 21 October 2018, Hafþór announced that he and Henson had married. [45] [46] On 11 April 2020, Hafþór announced on his Instagram page that he and Henson were expecting their first child together.

Hafþór has several tattoos including those in relation to Norse deities and the Viking culture. He also has a tattoo of Jón Páll Sigmarsson on his calf. [47] [48]

Hafþór and his former girlfriend Andrea have spoken about his occasional sleep troubles after a heavy meal due to his body weight. [47] [48]

Hafþór is a brand ambassador for SodaStream, a company involved in manufacture of a device for making carbonated water at home. He has appeared in advertisements of the brand promoting environmental awareness and collaborated in one with fellow Game of Thrones actor Hannah Waddingham (who played Septa Unella). [50] [51] [52]

In 2016, Hafþór co-founded the spirits brand Icelandic Mountain Vodka. The main focus of the company is a seven-time distilled Icelandic vodka, as well as having a gin production. [53] [54]

Set in the gym: 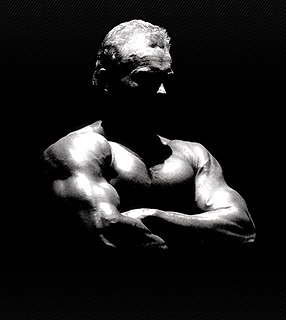 Jón Páll Sigmarsson was an Icelandic strongman, powerlifter and bodybuilder who was the first man to win the World's Strongest Man four times. He is regarded as one of the greatest strongmen of all time, and is credited with developing Iceland's national identity. He was named Icelandic Sportsperson of the Year in 1981, and was one of the best-known Icelandic athletes. In 2012, Jón Páll was inducted into the World's Strongest Man Hall of Fame. 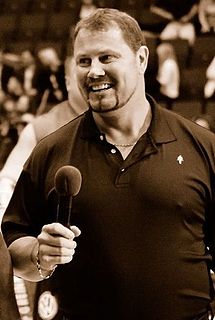 Magnús Ver Magnússon is an Icelandic former powerlifter and strongman competitor. He has won the title of World's Strongest Man four times.

The World's Strongest Man is an international strongman competition held every year. Organized by American event management company IMG, a subsidiary of Endeavor, it is broadcast in the US during summers and in the UK around the end of December each year. Competitors qualify based on placing in the top three at the four to eight Giants Live events each year.

The deadlift is a weight training exercise in which a loaded barbell or bar is lifted off the ground to the level of the hips, torso perpendicular to the floor, before being placed back on the ground. It is one of the three powerlifting exercises, along with the squat and bench press. 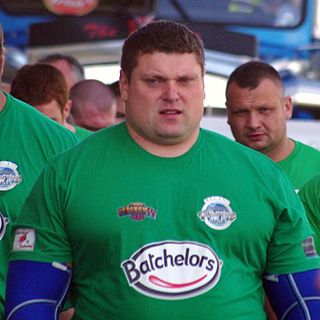 Žydrūnas Savickas is a Lithuanian powerlifter and professional strongman. He is the only modern competitor to have won every major strongman competition.

Brian Shaw is an American professional strongman competitor and winner of the 2011, 2013, 2015, and 2016 World's Strongest Man competitions. He is the first man to have won the Arnold Strongman Classic and the World’s Strongest Man contest in the same calendar year, a feat he accomplished in 2011 and then replicated in 2015.

Strength athletics in Iceland refers to the participation of Icelandic competitors and the holding of Icelandic events in the modern phenomenon of strength athletics inaugurated by the World's Strongest Man. The sport's roots have a long history going back many centuries before the televisation of strongman competitions in the 1970s and Iceland has a role in that more ancient heritage. In terms of modern strength athletics, Iceland has held a preeminent position as a nation due to the enormous success of its competitors on the international stage, who between them have won Nine World's Strongest Man titles, and numerous major European and international competitions.

The 2012 World's Strongest Man was the 35th edition of World's Strongest Man. The event was held on the grounds of the Commerce Casino in Los Angeles, California, US. The event was sponsored by MET-Rx. The qualifying heats were held from September 24–27, and the finals took place Sept. 30 & Oct. 1, 2012. The winner was Žydrūnas Savickas, it was his third WSM title. Vytautas Lalas of Lithuania was second, and Iceland's Hafþór Júlíus Björnsson was third.

Edward Stephen Hall is an English former professional strongman, notable for winning the World's Strongest Man 2017 competition and for being the world record deadlift holder, lifting 500 kg under strongman rules, which he achieved in 2016. His record was broken by Hafþór Júlíus Björnsson’s 501kg on May 2, 2020. He has also won on multiple occasions both the UK's Strongest Man and England's Strongest Man titles.

Orm Storolfsson, also known as Orm Storolfsson the Strong was an Icelandic strongman who gained considerable attention during his lifetime for extraordinary feats of strength. He is documented in the Icelandic Saga book to have walked three steps with the mast of Ormrinn Langi, weighing over 650 kilograms (1,430 lb) and 10 metres (33 ft) in length, on his shoulders before breaking his back. According to legend, it took some 50 men to place the ship’s mast on his shoulders due to its extreme weight.

Matjaz Belsak is a Slovenian professional strongman competitor and powerlifter.

World's Ultimate Strongman is an annual strength athletics competition which began in 2018. The event has a number of rival and parallel competitions, including the World's Strongest Man and the Giants Live Tour

Deadlift world records are the international records in deadlift across the years, regardless of weight class or governing organization. 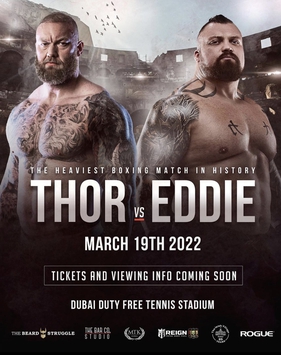 Eddie Hall vs. Hafþór Björnsson, also known as "The Heaviest Boxing Match in History", is an upcoming boxing match between strongmen Eddie Hall and Hafþór Björnsson. It is the first boxing match for both athletes and is set to take place in September 2021 in at a yet to be specified venue in Paradise, Nevada.