Last updated June 05, 2021
Someone who has completely memorized the Quran

Hafiz ( /ˈhɑːfɪz/ ; Arabic : حافظ‎, romanized: ḥāfiẓ, حُفَّاظ, pl. ḥuffāẓ, حافظة f. ḥāfiẓa), literally meaning "guardian" or "memorizer", depending on the context, is a term used by Muslims for someone who has completely memorized the Quran. Hafiza is the female equivalent. [1]

Hifz is memorization of the Quran. Muslims believe that whoever memorizes Quran and acts upon it, Allah will reward and honour them greatly, so that they will rise in status in Paradise to a level commensurate with what they memorized of the Book of Allah.[ citation needed ] Abdullah ibn Amr narrated that the Messenger of Allah said: “The Hafiz-e-Quran (a person who has memorized Quran) will be said on the day of Judgment: Recite and rise in status, recite as you used to recite in the world, for your status will be at the last verse that you recite.” (Jami` at-thirmidhi 2914) [ non-primary source needed ]

Having memorised the Quran, the hafiz or hafiza must then ensure they do not forget it. To ensure perfect recall of all the learned verses requires constant practice. [3] The memorisation of the Quran was important to Muslims in the past and is also in the present.[ citation needed ] Yearly, thousands of students master the Quran and complete the book with interpretation and also memorisation. The Quran is perhaps the only book, religious or secular, that has been memorized completely by millions of people. [4] In Pakistan alone, Qari Hafeez Jalandhari, the general secretary of the Wafaq-ul-Madaris, which is a central board accounting for most of the religious seminaries in Pakistan, says that, in its network of madaris, "one million children have become Hafiz-e-Quran after an exam was introduced in 1982", with more than 78 000 (including 14 000 girls) every year, which he compared to the yearly output of Saudi Arabia, which is of 5000. [5]

For Muslims who are attempting to memorize certain suras but are unfamiliar with the Arabic script, the ulema have made various elucidations. There are mixed opinions on the usage of romanization of Arabic due to concerns about mispronunciations, higher approval of writing systems with close consonantal and vocalic equivalents to classical Arabic or relevant and effective diacritics, and a preference for Quran tutors or recorded recitations from qaris or any device with clear audible sound storage technology, such as CDs or cassettes. [6] Keeping the Quran memorized as a person has always been a challenging and at the same time important issue in Muslim countries. In Iran, according to Resolution 573 of the Supreme Council of the Cultural Revolution, there is at least one specialized examination of the preservation of the Quran each year, according to specific criteria. The reviewer of this evaluation is Dar al-Qur'an al-Karim, a subsidiary of the Islamic Advertising Organization. According to Article 5 of the above Decree, holders of specialized qualifications for memorizing the Quran will enjoy the benefits of one to five art degrees, subject to the approval of the 547th session of the Supreme Council for Cultural Revolution. Therefore, the approval of the Qualification Degrees 1 to 5 of the Quran are in line with the Doctoral, Master's, Bachelor, Associate's Diploma and Diploma degrees, respectively. [7] [ circular reference ]

Main article: List of people who memorised the Quran 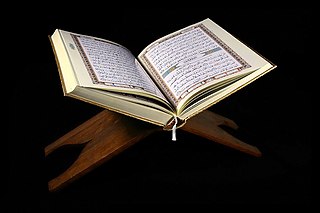 The Quran is the central religious text of Islam, believed by Muslims to be a revelation from God (Allah). It is widely regarded as the finest work in classical Arabic literature. It is organized in 114 chapters, which consist of verses. 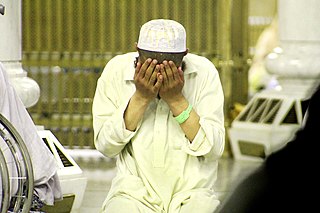 In Islam, duʿāʾ is a prayer of invocation, supplication or request, even asking help or assistance from God. Muslims regard this as a profound act of worship. Muhammad is reported to have said, "Dua is the very essence of worship."

The Rashidun Caliphates, often simply called, collectively, "the Rashidun", are the spiritual and political successors to the Islamic prophet Muhammad in the Sunni jurisprudence of Islam, refers to the 30-year reign (632–661) of the first four caliphs (successors) following the death of Muhammad, namely: Abu Bakr, Umar, Uthman ibn Affan, and Ali of the Rashidun Caliphate, the first caliphate. The caliphate of Hasan ibn Ali is sometimes also considered to be Rashidun as well but since it was merely a six month period it is not mentioned categorically. It is a reference to the Sunni imperative "Hold firmly to my example (sunnah) and that of the Rightly Guided Caliphs" (Tirmidhi).

The Declaration of God's UnityakaSincerityakaMonotheism, is the 112th chapter (sūrah) of the Quran.

Battle Array is the 61st chapter (sūrah) of the Quran with 14 verses (āyāt). This sura is an Al-Musabbihat sura because it begins with the glorification of Allah.

al-Mulk is the 67th chapter (surah) of the Quran, comprising 30 verses. The surah emphasizes that no individual can impose his will on another; he may only guide and set an example (67:26).

A Qāri is a person who recites the Quran with the proper rules of recitation (tajwid).

Abd Allah ibn Abbas, also known simply as Ibn Abbas, was one of the cousins of the Islamic Prophet Muhammad and he is considered to be the greatest mufassir of Qur'an. 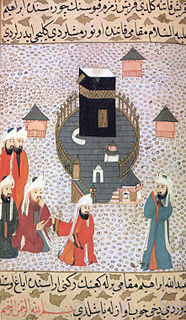 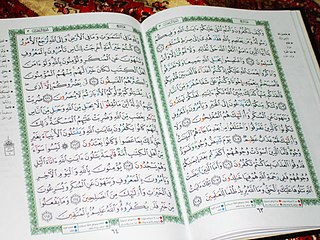 According to Islamic traditions, Zayd bin Thabit was the personal scribe of the Islamic prophet Muhammad, and was from the ansar (helpers). He joined the ranks of the Muslim army at age 19. After Muhammad's passing, he was ordered to collect the Quran into a single volume from various written and oral sources. He was a noted expert on the Quran and spent much time reciting it.

The history of the Qur'an — that is the timeline and origin of the written compilations or manuscripts of the holy book of Islam, based on historical findings — spans several centuries, and forms a major part of the early history of Islam.

In Islam, Qirāʼah, which are "different linguistic, lexical, phonetic, morphological and syntactical forms permitted with reciting" the holy book of Islam, the Quran. Differences between Qiraʼat are slight and include varying rules regarding the "prolongation, intonation, and pronunciation of words", but also differences in stops, vowels, consonants, and less frequently entire words. Qiraʼat also refers to the "branch of Islamic studies" that deals with these modes of recitation.

Mohamed Siddiq El-Minshawi or Mohamed Seddik El-Menshawy or Muhammad Siddik al-Minshawi, also simply known as El Minshawy, born in Upper Egypt, was a Qur'anic reciter and a Hafiz. The quadrumvirate of El Minshawy, Abdul Basit, Mustafa Ismail, and Al-Hussary are generally considered the most important and famous Qurra' of modern times to have had an outsized impact on the Islamic world.

Abu Bakr ‘Aasim Ibn Abi al-Najud al-'Asadi, commonly known as ‘Aasim ibn Abi an-Najud, was one of the seven primary transmitters of the Qira'at, or variant readings of the Qur'an. Of Persian origin, his method of reciting the Qur'an as transmitted by Hafs is the most common and popular way of reciting the holy book in the Muslim world in general.

According to Islamic tradition, the Quran was revealed to the Islamic prophet Muhammad by the angel Gabriel in sevenahruf, translated variously as "editions", "styles", "ways", "forms" and "modes". Although Muslim scholars differ on their exact nature, it is thought they constituted a degree of acceptable variation in the Quranic text. The standardisation of the Quranic rasmc. 650 CE and destruction of non-conforming mus'hafs by Rashidun caliph Uthman has been held by some scholars to have eliminated all the ahruf except one, although the extent to which the Uthmanic codex contains the seven ahruf has been a subject of debate. The ahruf are distinct from the ten qira'at, which are other variant readings of the Quran that were canonized later on and are still in use.

ʿAbū ʿAbdullāh Muhammad Ibn ʿAbū Yazīd Tayfūr Sajāvandī Ghaznavī, also known as Abū al-Fazl as-Sajāwandī al-Qāriʾ was a 12th-century Islamic scholar, mystic, Qāriʾ and theologian. He is preliminary known for his contributions to the Islamic traditions of recitation and pronunciation, creating a set of rules and markers used to indicate the pronunciation and pauses of Quranic recital, known as Sajawandi stop signs or Rumuz al-Awqaf as-Sajāwandī. He is also credited as being the first known person to use coloured circles as a means of separating verses in the Quran, a design choice which has persisted til today, with the addition of a verse number inside of the circle. In Persian, the term muṣ·ḥaf sajāwandī مُصْحَف سَجَاوَنْدِي may today be used to denote an elegantly written Quran, accounting for the association between Sajawandi and his use of lavish red and golden dots as pause markers. His son Ahmad ibn Muhammad Sajawandi was also a well-known chronicler, commentator on the Quran, poet and orator. 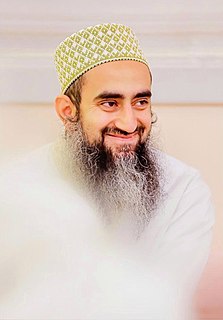 Shahzada Husain Burhanuddin, also known as Husain Mufaddal Saifuddin, is the third and youngest son of Mufaddal Saifuddin, the current incumbent of the office of the 53rd Da'i al-Mutlaq. He is a Qāriʾ and an honorary member of Naqabāt Qurrāʾ al-Quran in Cairo. Burhanuddin is a provost of Aljamea-tus-Saifiyah and heads Mahad al-Zahra, through which he has been instrumental in the realization of his grand father Mohammed Burhanuddin's vision for Dawoodi Bohra community to seek enlightenment through Quranic values. He also administers a number of socio-economic institutions run by Dawoodi Bohra community. Burhanuddin is a recipient of All India Council for Human Rights' Ambassador for Peace Award.

The Prostration of recitation is a prostration (sujud) which occurs during the ritual Tilawa of Quran in Salah or outside it.