listen )) is the 41st-largest city in Germany. The municipality is located in the state of North Rhine-Westphalia. It is located on the south eastern edge of the Ruhr area, 15 km south of Dortmund, where the rivers Lenne and Volme (met by the river Ennepe) meet the river Ruhr. As of 31 December 2010, the population was 188,529.

Hagen was first mentioned around the year 1200, and is presumed to have been the name of a farm at the confluence of the Volme and the Ennepe rivers. After the conquest of Burg Volmarstein  [ de ] in 1324, Hagen passed to the County of Mark. In 1614 it was awarded to the Margraviate of Brandenburg, according to the Treaty of Xanten. In 1701 it became part of the Kingdom of Prussia.

After the defeat of Prussia in the Fourth Coalition, Hagen was incorporated into the Grand Duchy of Berg from 1807–13. In 1815 it became part of the new Prussian Province of Westphalia.

The city developed more rapidly in the 19th century, stimulated by industrialization: the mining of coal and the production of steel in the Ruhr Area. In reaction to the Kapp Putsch in March 1920, when rightists tried to overthrow the elected government and restore the monarchy, tens of thousands of leftist workers in the Ruhr Valley, Germany's most important industrial area, rose up in protest. They were known as the Red Ruhr Army.

Thousands of workers went on strike and fought during the Ruhr Uprising, 13 March – 2 April 1920. Government and paramilitary forces were ordered against the workers, suppressing the uprising, and killing an estimated 1,000 workers. A memorial to the uprising was installed in Hagen.

During World War II, Hagen was bombed repeatedly, by both the Royal Air Force and the United States Eighth Air Force. On the night of 1 October 1943, 243 Lancasters and 8 Mosquitoes from the Royal Air Force's Bomber Command attacked the city. According to the Bomber Command Campaign Diary, "This raid was a complete success achieved on a completely cloud-covered target of small size, with only a moderate bomber effort and at trifling cost."[ citation needed ] Hagen sustained severe damage from that raid, and hundreds of civilians were killed.

After World War II, the city was included in the new state of North Rhine-Westphalia in the Federal Republic of Germany (FRG, also known as West Germany).[ citation needed ]

In August 2021, discovery of a cache of Nazi artifacts from a house was announced. A history teacher revealed a painted portrait of Adolf Hitler and medals decorated with eagles and swastikas, a newspaper from 1945, a revolver, gas masks, brass knuckles, and stacks of documents. It is also found out that the house once served as the headquarters of the Nationalsozialistische Volkswohlfahrt. [4] [5] [6] [7]

Owing to the extensive use of water power along the rivers Ruhr, Lenne, Volme and Ennepe, metal processing played an important role in the region of Hagen in and even before the 15th century.[ citation needed ] In the 17th and 18th centuries, textile and steel industries, as well as paper production were developed here.[ citation needed ]

In the early 21st century, Hagen is the home of the Suedwestfaelische Industrie- und Handelskammer, as well as Sparkasse Hagen, the local municipal savings bank. The bank's former headquarters, the Sparkasse Hagen tower, was a regional landmark until its demolition in 2004.[ citation needed ]

The city is heavily indebted and in the process of cutting city services in order to balance its budget.[ citation needed ]

The city has capitalized on the export of a wide variety of breads, most notably Hagenschmagenbrot, a traditional dark bread.

One of the five branches of South Westphalia University of Applied Sciences is located in the city (also: Fachhochschule Südwestfalen (FH SWF)), which offers various engineering programmes. This institution was founded in the city in 1824.

Hagen is home to the LWL-Freilichtmuseum Hagen, or Hagen Westphalian Open-Air Museum, a collection of historic industrial facilities. Trades such as printing, brewing, smithing, milling, and many others are represented, not only with static displays, but as living, working operations that visitors may in some cases participate in. It is located near the Hagen community of Eilpe.

The Historisches Centrum Hagen includes the city museum and Werdringen castle. In the Blätterhöhle cave in Hagen, the oldest fossils of modern people in Westphalia and the Ruhr were found. Some date to the early Mesolithic, 10,700 years B.C.E. It seems that the descendants of Mesolithic people in this area maintained a foraging lifestyle for more than 2000 years after the arrival of farming societies. [8]

some localities of Hagen:

The following table shows the largest foreign resident groups in the city of Hagen. [9]

The current Mayor of Hagen is independent Erik O. Schulz, elected in 2014 and re-elected in 2020. The most recent mayoral election was held on 13 September 2020, and the results were as follows:

The Hagen city council governs the city alongside the Mayor. The most recent city council election was held on 13 September 2020, and the results were as follows:

Hagen has been an important rail junction for the southeastern Ruhr valley since the first rail line opened in 1848. The marshalling yard of Hagen-Vorhalle is among Germany's largest, and the central station offers connections to the ICE network of Deutsche Bahn as well as to local and S-Bahn services. Since December 2005, Hagen has also been the starting point for a new service into Essen, operated by Abellio Deutschland.

Local traffic is handled by Hagener Straßenbahn (Hagen Tramways), which, despite its name, offers only bus services, as the last tramway route in Hagen was abandoned in May 1976. All in all there is a large-scale network of 36 bus lines in Hagen. All local rail and bus services operate under the transport association VRR.

The German Basketball Federation (DBB) is based in Hagen.

Hagen is also famous of its annual equestrian show 'Horses & Dreams' in April at Hof Kasselmann. It is one of the greatest equestrian shows in Germany and abroad. [10] In 2005 they were the host of the European Dressage Championships after Moscow withdrew. In 2021 Hagen is again host of the 2021 European Dressage Championships for seniors and U25. [11]

The Oberbergischer Kreis is a Kreis (district) in the state of North Rhine-Westphalia, Germany. Neighboring districts are Ennepe-Ruhr, Märkischer Kreis, Olpe, Altenkirchen, Rhein-Sieg, Rheinisch-Bergischer Kreis, and the urban districts Remscheid and Wuppertal.

Witten is a city with almost 100,000 inhabitants in the Ennepe-Ruhr-Kreis (district) in North Rhine-Westphalia, Germany.

Ennepetal is a town in the district of Ennepe-Ruhr-Kreis, in North Rhine-Westphalia, Germany. It was created in 1949 out of the former municipalities Milspe and Voerde. It was named after the river Ennepe, which flows through the municipality.

Dahl, now officially Hagen-Dahl, is a locality within the independent city of Hagen in the southeastern Ruhr, in Germany. It was incorporated into Hagen in 1975 together with Rummenohl and Priorei.

Rummenohl, now officially Hagen-Rummenohl, is a locality within the independent city of Hagen in the eastern part of the Ruhr region, in Germany. It lies in the valley of the river Volme, about 13 km upstream (south) of the city centre of Hagen.

The Volme is a river in North Rhine-Westphalia, Germany, and is a tributary of the river Ruhr. It is 50.5 kilometres (31.4 mi) long, of which about 21 km (13 mi) lie within the city limits of Hagen. Its largest tributary is the Ennepe.

The Ennepe is a river, and a left tributary of the Volme in Northern Sauerland, Germany.

Gevelsberg is a town in the district of Ennepe-Ruhr-Kreis, in North Rhine-Westphalia, Germany. 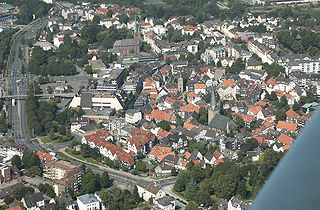 Hattingen is a town in the northern part of the Ennepe-Ruhr-Kreis district, in North Rhine-Westphalia, Germany.

Schwelm is a town in the district of Ennepe-Ruhr-Kreis in the administrative region of Arnsberg within the state of North Rhine-Westphalia.

Sprockhövel is a town in the district of Ennepe-Ruhr-Kreis, North Rhine-Westphalia, Germany.

Wetter (Ruhr) is a town in western Germany, in the federal state of North Rhine-Westphalia and the district of Ennepe-Ruhr-Kreis. The river Ruhr flows through the urban area, separating the district of Alt-Wetter from the districts of Esborn, Volmarstein and Wengern. The cities of Dortmund and Bochum are within 20 minutes by road or rail.

Castrop-Rauxel, often simply referred to as Castrop by locals, is a former coal mining city in the eastern part of the Ruhr Area in Germany.

Kai Gehring is a German politician of the Green Party who has been serving as a Member of the German Parliament since 2005.

The Hagen–Dieringhausen railway is a mostly single-track and non-electrified railway line from Hagen Hauptbahnhof via Lüdenscheid-Brügge, Meinerzhagen and Gummersbach to Gummersbach-Dieringhausen in the German state of North Rhine-Westphalia.

Fritz Steinhoff was a German politician of the SPD. He was the third Minister President of the state of North Rhine-Westphalia from 1956 to 1958.

Wikimedia Commons has media related to Hagen .
This page is based on this Wikipedia article
Text is available under the CC BY-SA 4.0 license; additional terms may apply.
Images, videos and audio are available under their respective licenses.