Hailin (Chinese :海林; pinyin :Hǎilín) is a county-level city, under the administration of the prefecture-level city of Mudanjiang, in the southeast of Heilongjiang province, China, bordering Jilin province to the southwest. It has an area of 8,816 km2 (3,404 sq mi), and a population of 422000 (as reported in 2012). Ethnic groups include the majority Han Chinese as well as significant numbers of Manchu and ethnic Koreans.

Literally, the name Hailin in English means "sea forest", somepeople guessthe meaning is "boundless forest", but the trurh is this city was a merger of two counties which called "Xinhai"and"Wulin".As easy to remember,the new city's name was choose one Chinese character in each old counties, and combined them as"Hailin" . In this sense, Hailin shares a name with the "boundless" Linhai Snowfield (林海雪原; Línhǎi Xuěyuán).

Hailin is today known by several descriptive names - "forest sea and snow plain", "hometown of Manchurian tigers", and "hometown of Chinese north medicine". However, in the past many knew Hailin from the story of people's revolutionary hero Yang Zi Rong (杨子荣), the real life hero Zhang Zonggui. His story was made into a modern, revolutionary Beijing opera Taking Tiger Mountain by Strategy , based the 1957 novel 林海雪原 (Línhǎi Xuěyuan) by Qü Bo. [1] Various movies have been made of the same story.

Hailin must have been inhabited even in the ancient times of the Shāng Dynasty or Yīn Dynasty (殷代), if not the Neolithic era. Historic sites include ancient Qunli rock paintings, Jiangdong ancient cemeteries of Jin Dynasty, the early site of the Qing Dynasty Ninguta city (from which a structure called Ninggu Ta - "Ninngu Tower" - remains [2] ), a wooden Russian Orthodox cathedral, a depot of the Chinese Eastern Railway constructed in 1903, and the Yang Zirong martyrs' cemetery.

During China's War of Resistance against Japanese Aggression (1937–45) the Japanese established a military airport at Hailin. Even recently (2005) aircraft bombs continue to be discovered during construction and other projects.

71% of the county is covered by forest. Important products include timber, medicinal herbs such as ginseng and eleutherococcus senticosus , and forest foods such as edible mushrooms, which are farmed in large quantities.

Tourist activities include skiing. Other attractions include two national forest parks (Roaring Tiger Mountain and China Snowland), the largest artificial lake in northeast China (the Lotus Lake), and the largest animal raising center in China, if not the world (the Hengdaohezi Northeast Tiger Center). Hengdaohezi Northeast Tiger Park is the largest breeding center for Siberian tigers in the country. It was established in 1986 with 8 tigers, and has a population of some 256 tigers (as of 2006). 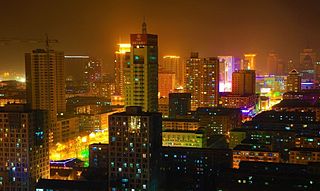 Linhai is a county-level city in Taizhou, Zhejiang Province situated on the banks of the Lin River in Eastern China.

Longhai is a county-level city within the prefecture-level city of Zhangzhou, in the south of Fujian province, People's Republic of China. Longhai comprises territory on both banks of the lower Jiulong River, although most of its area is on the right (southern) bank. The left bank yields to Xiamen before reaching the sea, the right bank becomes the south shore of Xiamen Bay and is home to the Zhangzhou Port tariff-free industrial export zone, in Longhai's Gangwei Town.

Haiyang, a coastal city in Shandong province in eastern China, located on the Yellow Sea (southern) coast of the Shandong Peninsula. It is a county-level city under the administration of the prefecture-level city of Yantai.

Ning'an is a city located approximately 20 km (12 mi) southwest of Mudanjiang, in the southeast of Heilongjiang province, China, bordering Jilin province to the south. It is located on the Mudanjiang River, which flows north, eventually falling into the Sungari River near Sanxing.

Songzi is a city in the southwest of Hubei province, People's Republic of China, located in the middle reach and southern bank of the Yangtze River. It is a county-level city under the administration of the prefecture-level city of Jingzhou, and controls 16 townships and 2 development zones, 235,000 households and a population of 765,911. It is a long-historied but young and robust city. 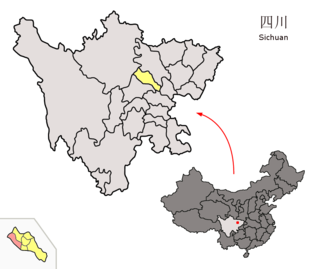 Shifang, formerly Shifang County, is a county-level city in Sichuan, China under the municipal administration of Deyang. It is located directly about 50 kilometers (31 mi) from Chengdu. It had an area of 863 km2 (333 sq mi) and a population of 430,000 in 2004. Shifang has a history stretching back over two thousand years. It suffered heavy damage during the 2008 Sichuan earthquake. The city was also the scene of a large-scale environmental protest against a copper smelting plant in July 2012.

Lin'an District is one of ten urban districts of the prefecture-level city of Hangzhou, the capital of Zhejiang Province, East China. It is located in northwest Zhejiang covering the far western suburbs of Hangzhou, and borders Anhui province to the west and northwest. Lin'an held a population of 573,100 in 2014, over an area of 3,124 km2 (1,206 sq mi). The postal code is 311300, and the phone area code 0571. 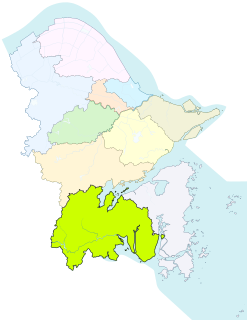 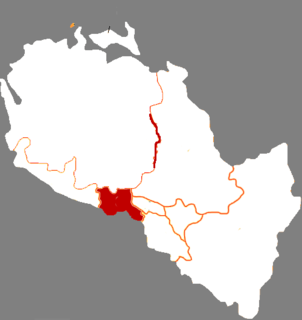 Xigu District is one of 5 districts of the prefecture-level city of Lanzhou, the capital of Gansu Province, Northwest China. It is the westernmost part of the city of Lanzhou proper. Until 1952, Xigu was part of Gaolan County as a township and in 1953 it was established as the fifth district level division of Lanzhou. During this period, as part of China's first five-year plan, the petrochemical industry was developed in the area.

Shennongjia Forestry District is a county-level administrative unit in northwestern Hubei province, People's Republic of China, directly subordinated to the provincial government. It occupies 3,253 square kilometres (1,256 sq mi) in western Hubei, and, as of 2007 had the resident population estimated at 74,000. On July 17, 2016, Hubei Shennongjia was listed as World Heritage Site, the 50th World Heritage Site in China. 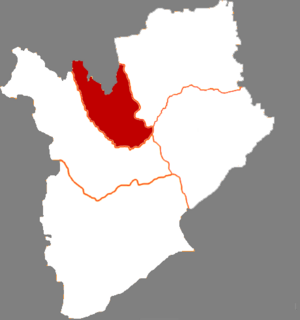 Xishan Island is a part of Suzhou (苏州) It's the largest island in Lake Tai covering an area of 79.8 square kilometers. There are 72 mountains in Taihu County, with 41 of them located in Xishan Island. The highest mountain, Piaomiao Mountain (缥缈峰), is 336.6 meters high and also belongs to Xishan Island.

Qingyuan Maglev is a medium-low speed maglev rapid transit line in Qingyuan, Guangdong province, China. It is currently under construction.