The Haizhu Island Circular New Tram (Chinese :海珠环岛新型有轨电车), line THZ1, or YoungTram is a tram system mainly serving the Haizhu District of Guangzhou, between Canton Tower and Wanshengwei. It is an at-grade tram system. The whole line (except Party Pier station) began operation on 31 December 2014. [1] Party Pier stop was added on 21 October 2015. [2] 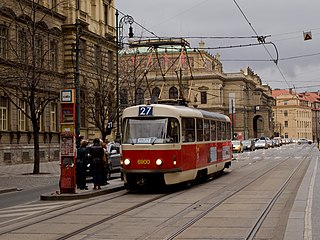 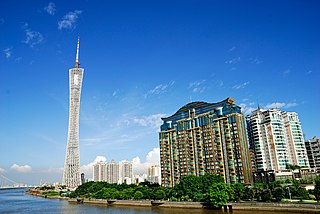 Haizhu District is one of the ten districts in Guangzhou, capital of Guangdong province, People's Republic of China.

The Haizhu Tram is the first of seven planned lines operated by Guangzhou Trams to open.

Guangzhou Trams is the tram system in Guangzhou, Guangdong province, China. A single line between Canton Tower and Wanshengwei, along northern shore of Haizhu Island is currently in operation.

The entire track of the first section of the Haizhu Tram, with a length of 7.7 km and all ten stations are laid at-grade. 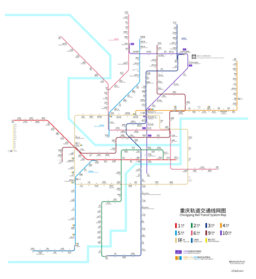 The Chongqing Rail Transit is the rapid transit system in the city of Chongqing, China. In operation since 2005, it serves the transportation needs of the city's main business and entertainment downtown areas and inner suburbs. As of December 2018, CRT consisted of eight lines, with a total track length of 311.9 km (193.8 mi). Lines 1, 4, 5, 6, 10 and the Loop line are conventional heavy-rail subways, while Lines 2 and 3 are high-capacity monorails. To keep up with urban growth, construction is under way on Lines 9 and S5, in addition to extensions to Lines 1, 5, 6, 10 and the Loop line. A network of 18 lines is planned.

Chengdu Metro is the rapid transit system of Chengdu, the capital of Sichuan Province, China. The system has six lines in operation. Line 1 was opened on 27 September 2010, making it the first heavy-rail metro line in southwest China. Line 2 began operations in September 2012. Line 4 opened to public at the end of December 2015, while Line 3 opened in July 2016. Metro lines are operated by Chengdu Rail Transit Group Company Limited. There are currently over 350 km (220 mi) of subway lines under construction in Chengdu.

The Shenyang Metro is a rapid transit system serving the city of Shenyang, Liaoning, China. It is the 7th operational subway system in Mainland China and the first in Northeast China. The system connects with a tram network in the southern part of the city. 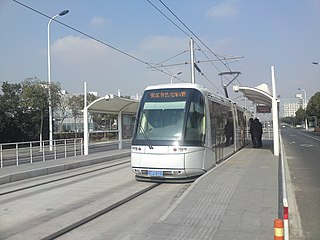 Zhangjiang Tram is one of the only two tram lines operating in Shanghai today,the other being Songjiang Tram.It utilises a system manufactured by the French Translohr company. Shanghai originally had a steel wheeled electric tramway network in its urban center. Routes expanded gradually and reached largest extent in 1925 with 328 tramcars; this tram system shut down in 1975. Tram service returned to Shanghai with the opening of a rubber tired Translohr line in the suburban Zhangjiang Hi-Tech Park in 2010. It is the second rubber-tired tram system in both China and Asia,the first being TEDA tram in Tianjin.

The Xijiao Line of the Beijing Subway is a light rail line in Haidian District of Beijing. It runs west and north from Bagou on Line 10 to the Fragrant Hills - a total length of 8.8 km (5.5 mi). It was opened on December 30, 2017.

Kunming Metro, or Kunming Rail Transit, is a rapid transit system in Kunming, the capital of Yunnan Province. With a population of just over 3 million people, Kunming was one of the largest cities in China without a metro system before its construction. The system consist of 3 lines with 3 more lines under construction. The metro typically consists of subway segments in the city centre and elevated grade-separated segments in the periphery.

Nanchang Metro is a metro system in Nanchang, Jiangxi, China. As of 2017, two lines are operational. The Metro opened for commercial operation in December 2015.

Public bus service in Beijing is the among the most extensive, widely used and affordable form of public transportation in urban and suburban districts of the city. In 2015, the entire network consisted of 876 routes with a fleet of 24,347 buses and trolleybuses carried 3.98 billion passengers annually. Trolleybuses run on over 29 routes including 6, 38, 42, 65, 101-112, 114-118, 124, 128, 301, BRT 1-3. Many of these trolleybus routes are located inside the Third Ring Road but some, such as 301 and BRT 1-3, do extend as far out as the Fifth Ring Road. Since 2013, In an effort to reduce urban air pollution, Beijing has been converting regular bus routes to trolleybus routes by installing overhead power lines on several corridors. Public bus service in the city began in 1921. Today there are two operators. The city's primary public bus operator, the state-owned Beijing Public Transport Holdings, Ltd. operates most routes and the Beijing Xianglong Bus Co., Ltd., an independent operator, provides service on 32 "Yuntong" (运通) bus routes. 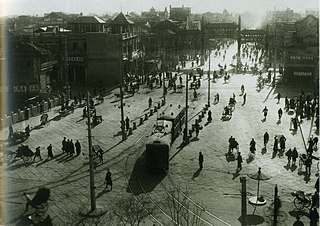 The earliest tram (有轨电车) service in Beijing dates back to 1899, and trams were the main form of public transit from 1924 to the late 1950s before they were replaced by trolleybuses that follow the tram routes they replaced. However new tram services are being introduced in Beijing's suburbs.

The Pearl River Delta Metropolitan Region Intercity Railway System is a regional higher-speed rail and commuter rail network being gradually constructed in the Pearl River Delta, People's Republic of China. The project's goal is to have every major urban center in the Yuegang'ao Greater Bay Area to be within one-hour travel by rail to Guangzhou. On March 16, 2005, the State Council examined and approved plans for a regional high-speed commuter rail network for the Jingjinji, Yangtze River Delta and the Pearl River Delta. According to the plan, by 2020, PRD MAIR network will have a total route mileage of about 600 kilometres (370 mi). In September 2009, the plan was expanded to 1,478 km (918 mi) of routes split up into 23 lines. In the long term vision network length will reach 1,890 km (1,170 mi) by 2030. By then the network will provide basic coverage to the Pearl River Delta region. 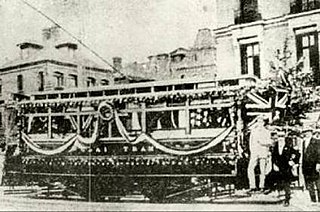 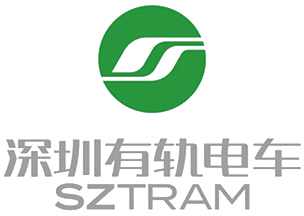 Shenzhen Tram is a light rail system consisting of two tram routes in Longhua District, Shenzhen, Guangdong, China. Construction commenced on 27 December 2013 and public testing started on 30 June 2017, with the system fully opening on 28 October 2017. The tram system integrates the north side of Longhua into the city's rail network and is expected to significantly ease commuting difficulties, especially since the northern extension of Shenzhen Metro Line 4 is still being planned.

Nanjing tram is the tram system of Nanjing city in the Jiangsu of the China. There are two lines which are not connected to each other.

Suzhou SND Tram is a tram system in Suzhou New District, Suzhou, Jiangsu, China. The tram uses an overhead catenery system. Suzhou Tram started construction on September 11, 2012 and was opened on October 26, 2014. There is currently one line in operation in the Suzhou New District. The Suzhou High-Tech Rail Tram Limited was established in April 2011, and the tram line was approved by the Suzhou City government June the same year.

Line 10, also known as the Bantian line of the Shenzhen Metro began construction at the end of 2015; the line is expected to open in 2020. Line 10 has a length of 29.9 km (18.6 mi) and a total of 23 stations. It connects the Futian Checkpoint to Shuangyong Street. In the southern terminus of the line, a 555 meters long and 50.5 meters wide double deck underground depot capable of storing 16 trains will be constructed.