Haku Vajubhai Shah (24 March 1934 – 21 March 2019) was an Indian painter, Gandhian, cultural anthropologist and author on folk and tribal art and culture. His art belonged to the Baroda Group and his works are considered in the line of artists who brought themes of folk or tribal art to Indian art. [1] [2]

He received several awards including the Padma Shri (1989), the Jawarharlal Nehru Fellowship and the Kala Ratna for his contribution to art. [2] [3]

Haku Vajubhai Shah was born on 26 March 1934, [4] [5] [6] in Valod (now in Surat district, Gujarat) to Vajubhai and Vadanben. His mother was influenced by Mahatma Gandhi and it influenced him. He completed his primary and secondary school education in Valod and was an active member of student union. He graduated in Fine Arts (BFA) from The Maharaja Sayajirao University of Baroda in 1955, followed by a master's degree in Fine Arts (MFA) from the same university. [2] [5] [7]

His work caught the public eye, and by 1965 he had held several one-man shows in Kolkata and Mumbai. In 1968, he curated the 'Unknown India' exhibition, organized by Art Critic Stella Kramrisch at the Philadelphia Museum of Art. He received the Rockefeller Grant in the same year and in 1971, the Nehru Fellowship Award. [7]

Over the years, he carried out extensive field research and documentation on rural and tribal arts and crafts, traditions and folk lore. He taught at a Gandhian Ashram in south Gujarat for several years and established a tribal museum at Gujarat Vidyapith in Ahmedabad, which was set up by Mahatma Gandhi. Haku curated the museum for several year, which was to become his last legacy. [2]

His work is deeply influenced by the tribal art and culture, a theme on which he wrote several of his works, and also Bhakti movement, especially its Nirguna poetry. [2] He was also deeply influenced by Gandhian philosophy. [5] In 1980s, he was also instrumental in the foundation of Shilpgram, a crafts village, in Udaipur, Rajasthan. [2] [5]

Jyotindra Jain is an Indian art and cultural historian, and museologist. A scholar on folk and ritual arts of India, he was the Director of the National Crafts Museum, New Delhi, Member Secretary and Professor, at Indira Gandhi National Centre for the Arts (IGNCA), New Delhi, and also Professor at the School of Arts and Aesthetics at Jawaharlal Nehru University, Delhi. He has published a number of books on Indian folk art, including, Ganga Devi: Tradition and Expression in Mithila Painting, Other Masters: Five Contemporary Folk and Tribal Artists of India and Kalighat Painting: Images from a Changing World.

Latika Katt is an Indian sculptor who specializes in stone carving, metal casting and bronze sculpting. She is notable for winning the Beijing Art Biennale Award for her bronze work titled "Makar Sankranti at Dashawmeth Ghat, Varanasi. 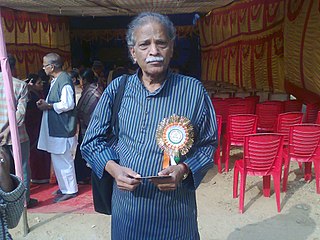 Dinanath Pathy was an Indian painter, author and art historian from the state of Odisha. Pathy was the former secretary of Lalit Kala Akademi in New Delhi and Bhubaneswar. He was the founding principal of the Bibhuti Kanungo College of Art and Crafts. Pathy was awarded the President of India Silver Plaque for painting, Odisha Sahitya Academy Award for autobiography "Digapahandira Drawing Master", and Jawaharlal Nehru Fellowship for his research in art. He was nominated for the International Rietberg Award from Rietberg Society in 2014 for his contributions to research on Indian art history. Pathy authored over 50 books in English, Odia and German on classical, traditional, tribal, folk, rural and contemporary art of Odisha.

Rasiklal Chhotalal Parikh (1897–1982) was a 20th-century Gujarati poet, playwright, literary critic, Indologist, historian, and editor from Gujarat, India. He was the president of Gujarat Sahitya Sabha and was appointed as the president of Gujarati Sahitya Parishad in 1964. He received the Sahitya Akademi Award in 1960 for his play Sharvilak. He is also a recipient of the Ranjitram Suvarna Chandrak and the Narmad Suvarna Chandrak.

Joravarsinh Danubhai Jadav is an Indian folklorist and proponent of the folk arts from Gujarat. Exposed to folk culture as a child, he studied history and culture in Ahmedabad. He has written and edited more than 90 works on folk culture, folk literature, and folk arts. He established the Gujarat Lok Kala Foundation for the promotion of folk arts. He was awarded the Padma Shri in 2019.