Last updated September 12, 2021
Not to be confused with Hal Davis.
Musical artist

Harold Lane David (May 25, 1921 – September 1, 2012) was an American lyricist. [3] He grew up in New York City. He was best known for his collaborations with composer Burt Bacharach and his association with Dionne Warwick.

David was born in New York City, a son of Austrian Jewish immigrants Lina (née Goldberg) and Gedalier David, who owned a delicatessen in New York, and younger brother of American lyricist and songwriter Mack David. [4] [5]

David is credited with popular music lyrics, beginning in the 1940s with material written for bandleader Sammy Kaye and for Guy Lombardo. He worked with Morty Nevins of The Three Suns on four songs for the feature film Two Gals and a Guy (1951), starring Janis Paige and Robert Alda.

In 1957, David met composer Burt Bacharach at Famous Music in the Brill Building in New York. The two teamed up and wrote their first hit "The Story of My Life", recorded by Marty Robbins in 1957. Subsequently, in the 1960s and early 1970s Bacharach and David wrote some of the most enduring songs in American popular music, many for Dionne Warwick but also for The Carpenters, Dusty Springfield, B. J. Thomas, Gene Pitney, Tom Jones, Jackie DeShannon and others. [3]

In the UK, a version of "The Story of My Life" recorded by Michael Holliday reached No. 1 in 1958 before being replaced by Perry Como's "Magic Moments", the first time any songwriter had consecutive #1 hits in the UK Singles Chart.

Bacharach and David hits included "Alfie", "Raindrops Keep Fallin' on My Head", "This Guy's in Love with You", "I'll Never Fall in Love Again", "Do You Know the Way to San Jose", "Walk On By", "What the World Needs Now Is Love", "I Say a Little Prayer", "(There's) Always Something There to Remind Me", "One Less Bell to Answer" and "Anyone Who Had a Heart". [3]

The duo's film work includes the Oscar-nominated title songs for "What's New Pussycat?" and "Alfie", "The Look of Love", from Casino Royale ; and the Oscar-winning "Raindrops Keep Fallin' on My Head" from Butch Cassidy and the Sundance Kid . In addition, "Don't Make Me Over", "(They Long to Be) Close to You" and "Walk On By" have been inducted into the Grammy Hall of Fame.

David's work with other composers includes Albert Hammond for Willie Nelson and Julio Iglesias's "To All the Girls I've Loved Before"; [3] Sarah Vaughan's "Broken Hearted Melody", with Sherman Edwards; the 1962 Joanie Sommers hit "Johnny Get Angry" also with Edwards; and "99 Miles From L.A." with Albert Hammond, recorded by Hammond and later Art Garfunkel. With Paul Hampton, David co-wrote the country standard "Sea of Heartbreak", a hit for Don Gibson and others.

David contributed lyrics to three James Bond film themes—in addition to "The Look of Love" from Casino Royale (1967) with Bacharach, he wrote "We Have All the Time in the World", with John Barry and sung by Louis Armstrong for the 1969 film On Her Majesty's Secret Service , and in 1979, "Moonraker", also with Barry, sung by Bond regular Shirley Bassey for the film of the same name.

David and Bacharach were awarded the 2011 Gershwin Prize for Popular Song, bestowed by the Library of Congress, the first time a songwriting team was given the honor. David was recuperating from an illness and was unable to attend the Washington D.C. presentation ceremony in May 2012. [6]

He is interred in the Forest Lawn Memorial Park (Hollywood Hills) beside his first wife, Anne, who died in 1987.[ citation needed ] 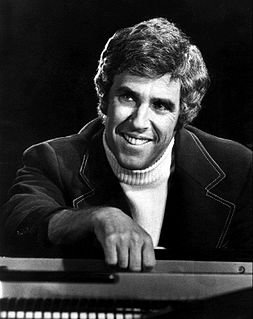 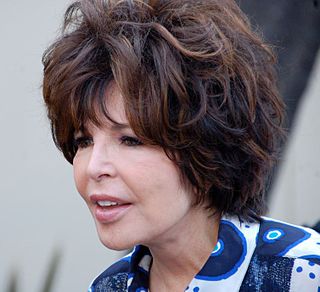 "The Look of Love" is a popular song composed by Burt Bacharach and Hal David and originally popularized by English pop singer Dusty Springfield. The song is notable for its sensuality and its relaxed bossa nova rhythm. The song was featured in the 1967 spoof James Bond film Casino Royale. In 2008, the song was inducted into the Grammy Hall of Fame. It also received a Best Song nomination at the 1968 Academy Awards. 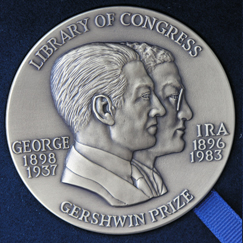 The Library of Congress Gershwin Prize for Popular Song is an award given to a composer or performer for their lifetime contributions to popular music. Created in 2007 by the United States Library of Congress, the prize is named after brothers George and Ira Gershwin, whose contributions to popular music included songs such as I Got Rhythm, Embraceable You, and Someone to Watch Over Me, the orchestral pieces Rhapsody in Blue and An American in Paris, and the opera Porgy and Bess. 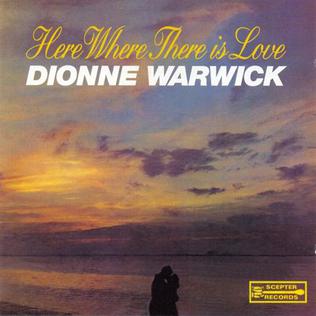 Here Where There Is Love is Dionne Warwick's sixth studio album for Scepter Records, and was released in December 1966. The LP was catalog number 555 on the label. The album was recorded at Bell Sound Studios in New York City and was produced in full by Burt Bacharach and Hal David with Bacharach also arranging and conducting. 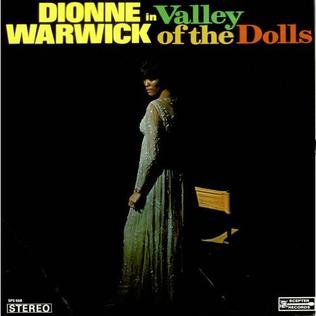 Dionne Warwick in Valley of the Dolls is the title of Dionne Warwick's ninth album for the Scepter label. It was recorded during the summer and fall of 1967 and was released early the next year. It was recorded at A&R and Bell Sound Studios in New York City and was produced by Burt Bacharach and Hal David.

Dionne Warwick is an American recording artist. She has charted 69 times on the US Billboard Hot 100 singles chart, making her the second-most charted female vocalist during the rock era (1955–1999), after Aretha Franklin. Warwick has sold over 75 million singles and 25 million albums worldwide. She has charted 18 songs in the Top 20 of the US Hot 100 and charted several more hits inside the Top 40. 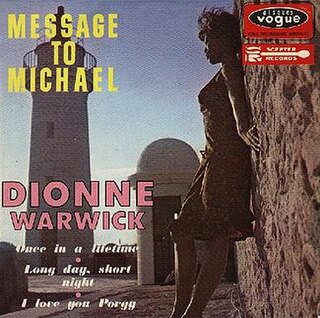 "Message to Michael" is a song written by Burt Bacharach and Hal David, that has been a hit for several different artists under several different titles. The song was first recorded as "Message to Martha" by Jerry Butler in 1962. In 1964, singer Lou Johnson had a minor US hit with the song, with the title "Kentucky Bluebird". British singer Adam Faith also recorded the song as "A Message to Martha " in 1965, and had a substantial hit with it in the UK, reaching No. 12. Exactly the same recording was issued in Australia as "Message to Martha", where it was a No. 15 hit for Faith. In the United States, Dionne Warwick's version, titled "Message to Michael", was a top ten hit there in 1966.

"Wives and Lovers" is a 1963 song by Burt Bacharach and Hal David. It has been recorded by numerous male and female vocalists, instrumentalists and ensembles, most notably by Jack Jones in 1963. That recording earned the 1964 Grammy Award for Best Vocal Performance, Male, and peaked at number fourteen on the Hot 100 and number nine on the Easy Listening chart.

One Amazing Night is a 1998 live tribute show performed by artists such as Dionne Warwick, Elvis Costello, Luther Vandross, Sheryl Crow and others to honor the music of Burt Bacharach. It was recorded live at the Hammerstein Ballroom, New York City with Bacharach himself conducting the orchestra and playing the piano. It was initially released on CD and VHS only, but in 2002, a DVD was released. There were some differences in the track listing; song order was changed. The song "This House Is Empty Now" performed by Elvis Costello is substituted for his performance of "God Give Me Strength" featured on the CD and was released digitally. 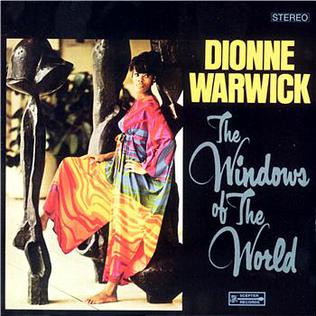 The Windows of the World is the title of the eighth studio album by Dionne Warwick, released August 1967 when the title cut was in the Top 40.

"The Windows of the World" is a song written by Burt Bacharach (music) and Hal David (lyrics) which was a hit single for Dionne Warwick in 1967. 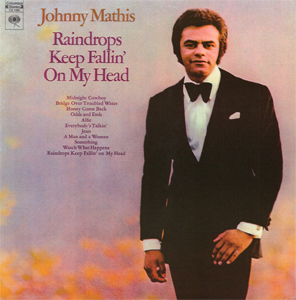 Raindrops Keep Fallin' on My Head is an album by American pop singer Johnny Mathis that was released on February 25, 1970, by Columbia Records and included several covers of chart hits from the previous year along with 1964's "Watch What Happens" and the 1966 tunes "Alfie" and "A Man and a Woman".

Johnny Mathis Sings the Music of Bacharach & Kaempfert is an album by American pop singer Johnny Mathis that was released in the fall of 1970 by Columbia Records. While one half of the two-record set was a compilation of tracks from his previous albums that were composed by Burt Bacharach, the other consisted of new recordings of songs composed by Bert Kaempfert, including a new version of "Strangers in the Night", which Mathis had already recorded in 1966 for his LP Johnny Mathis Sings. Although the Kaempfert tribute was similar to recent Mathis albums in that he was mainly covering songs made popular by other singers, it was absent of hits from the 12 months previous to its release that had become the pattern of his output at this point. The latest US chartings of any of the Kaempfert compositions as of this album's debut came from 1967 recordings of "Lady" by Jack Jones and "The Lady Smiles" by Matt Monro. 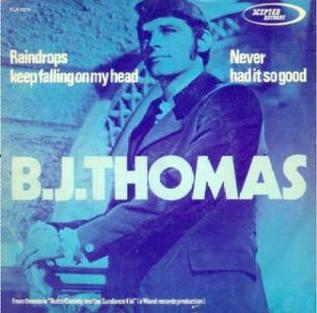 "Raindrops Keep Fallin' on My Head" is a song written by Burt Bacharach and Hal David for the 1969 film Butch Cassidy and the Sundance Kid. The uplifting lyrics describe somebody who overcomes his troubles and worries by realizing that "it won't be long 'till happiness steps up to greet me."

"Trains and Boats and Planes" is a song written by composer Burt Bacharach and lyricist Hal David, and first recorded in 1965. Hit versions were recorded by Bacharach and by Billy J. Kramer and the Dakotas in 1965, and by Dionne Warwick in 1966. 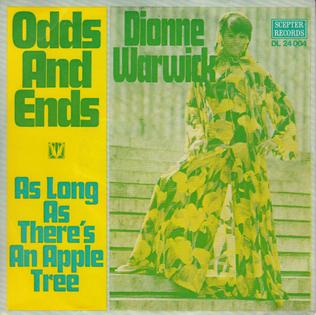 "Odds and Ends" is a 1969 song by Dionne Warwick, written by Burt Bacharach and Hal David. It was released as a non-album single. Narrowly missing the U.S. Billboard Top 40, it reached the Top 20 on the Adult Contemporary charts of Canada and the U.S., where it peaked at number seven.