Half-life (symbol t1⁄2) is the time required for a quantity to reduce to half of its initial value. The term is commonly used in nuclear physics to describe how quickly unstable atoms undergo, or how long stable atoms survive, radioactive decay. The term is also used more generally to characterize any type of exponential or non-exponential decay. For example, the medical sciences refer to the biological half-life of drugs and other chemicals in the human body. The converse of half-life is doubling time.

The original term, half-life period, dating to Ernest Rutherford's discovery of the principle in 1907, was shortened to half-life in the early 1950s. [1] Rutherford applied the principle of a radioactive element's half-life to studies of age determination of rocks by measuring the decay period of radium to lead-206.

Half-life is constant over the lifetime of an exponentially decaying quantity, and it is a characteristic unit for the exponential decay equation. The accompanying table shows the reduction of a quantity as a function of the number of half-lives elapsed.

A half-life usually describes the decay of discrete entities, such as radioactive atoms. In that case, it does not work to use the definition that states "half-life is the time required for exactly half of the entities to decay". For example, if there is just one radioactive atom, and its half-life is one second, there will not be "half of an atom" left after one second.

Instead, the half-life is defined in terms of probability: "Half-life is the time required for exactly half of the entities to decay on average ". In other words, the probability of a radioactive atom decaying within its half-life is 50%. [2]

For example, the image on the right is a simulation of many identical atoms undergoing radioactive decay. Note that after one half-life there are not exactly one-half of the atoms remaining, only approximately, because of the random variation in the process. Nevertheless, when there are many identical atoms decaying (right boxes), the law of large numbers suggests that it is a very good approximation to say that half of the atoms remain after one half-life.

Formulas for half-life in exponential decay

An exponential decay can be described by any of the following three equivalent formulas: [6] :109–112

The three parameters t1⁄2, τ, and λ are all directly related in the following way:

Decay by two or more processes

Some quantities decay by two exponential-decay processes simultaneously. In this case, the actual half-life T1⁄2 can be related to the half-lives t1 and t2 that the quantity would have if each of the decay processes acted in isolation:

For three or more processes, the analogous formula is:

For a proof of these formulas, see Exponential decay § Decay by two or more processes.

There is a half-life describing any exponential-decay process. For example:

The term "half-life" is almost exclusively used for decay processes that are exponential (such as radioactive decay or the other examples above), or approximately exponential (such as biological half-life discussed below). In a decay process that is not even close to exponential, the half-life will change dramatically while the decay is happening. In this situation it is generally uncommon to talk about half-life in the first place, but sometimes people will describe the decay in terms of its "first half-life", "second half-life", etc., where the first half-life is defined as the time required for decay from the initial value to 50%, the second half-life is from 50% to 25%, and so on. [7]

In biology and pharmacology

The relationship between the biological and plasma half-lives of a substance can be complex, due to factors including accumulation in tissues, active metabolites, and receptor interactions. [8]

While a radioactive isotope decays almost perfectly according to so-called "first order kinetics" where the rate constant is a fixed number, the elimination of a substance from a living organism usually follows more complex chemical kinetics.

The concept of a half-life has also been utilized for pesticides in plants, [10] and certain authors maintain that pesticide risk and impact assessment models rely on and are sensitive to information describing dissipation from plants. [11] 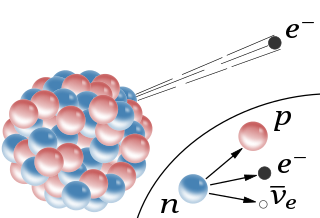 In nuclear physics, beta decay (β-decay) is a type of radioactive decay in which a beta particle is emitted from an atomic nucleus, transforming the original nuclide to an isobar. For example, beta decay of a neutron transforms it into a proton by the emission of an electron accompanied by an antineutrino; or, conversely a proton is converted into a neutron by the emission of a positron with a neutrino in so-called positron emission. Neither the beta particle nor its associated (anti-)neutrino exist within the nucleus prior to beta decay, but are created in the decay process. By this process, unstable atoms obtain a more stable ratio of protons to neutrons. The probability of a nuclide decaying due to beta and other forms of decay is determined by its nuclear binding energy. The binding energies of all existing nuclides form what is called the nuclear band or valley of stability. For either electron or positron emission to be energetically possible, the energy release or Q value must be positive. 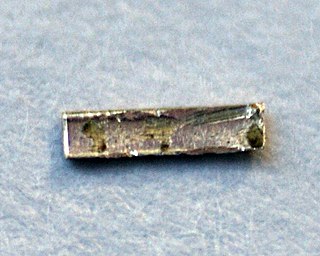 The curie is a non-SI unit of radioactivity originally defined in 1910. According to a notice in Nature at the time, it was named in honour of Pierre Curie, but was considered at least by some to be in honour of Marie Curie as well.

Radioactive decay is the process by which an unstable atomic nucleus loses energy by radiation. A material containing unstable nuclei is considered radioactive. Three of the most common types of decay are alpha decay, beta decay, and gamma decay, all of which involve emitting one or more particles or photons. The weak force is the mechanism that is responsible for beta decay. 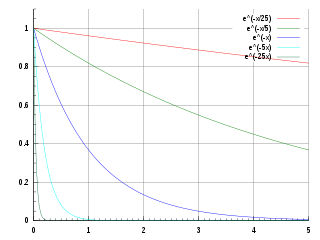 A quantity is subject to exponential decay if it decreases at a rate proportional to its current value. Symbolically, this process can be expressed by the following differential equation, where N is the quantity and λ (lambda) is a positive rate called the exponential decay constant:

Specific activity is the activity per quantity of a radionuclide and is a physical property of that radionuclide.

In pharmacokinetics, the effective half-life is the rate of accumulation or elimination of a biochemical or pharmacological substance in an organism; it is the analogue of biological half-life when the kinetics are governed by multiple independent mechanisms. This is seen when there are multiple mechanisms of elimination, or when a drug occupies multiple pharmacological compartments. It reflects the cumulative effect of the individual half-lives, as observed by the changes in the actual serum concentration of a drug under a given dosing regimen. The complexity of biological systems means that most pharmacological substances do not have a single mechanism of elimination, and hence the observed or effective half-life does not reflect that of a single process, but rather the summation of multiple independent processes.

In science, e-folding is the time interval in which an exponentially growing quantity increases by a factor of e; it is the base-e analog of doubling time. This term is often used in many areas of science, such as in atmospheric chemistry, medicine and theoretical physics, especially when cosmic inflation is investigated. Physicists and chemists often talk about the e-folding time scale that is determined by the proper time in which the length of a patch of space or spacetime increases by the factor e mentioned above.

In nuclear physics, secular equilibrium is a situation in which the quantity of a radioactive isotope remains constant because its production rate is equal to its decay rate.

The doubling time is time it takes for a population to double in size/value. It is applied to population growth, inflation, resource extraction, consumption of goods, compound interest, the volume of malignant tumours, and many other things that tend to grow over time. When the relative growth rate is constant, the quantity undergoes exponential growth and has a constant doubling time or period, which can be calculated directly from the growth rate.

Laser linewidth is the spectral linewidth of a laser beam.

In nuclear physics, the Bateman equation is a mathematical model describing abundances and activities in a decay chain as a function of time, based on the decay rates and initial abundances. The model was formulated by Ernest Rutherford in 1905 and the analytical solution was provided by Harry Bateman in 1910.

Potassium–calcium dating, abbreviated K–Ca dating, is a radiometric dating method used in geochronology. It is based upon measuring the ratio of a parent isotope of potassium (40K) to a daughter isotope of calcium (40Ca). This form of radioactive decay is accomplished through beta decay. 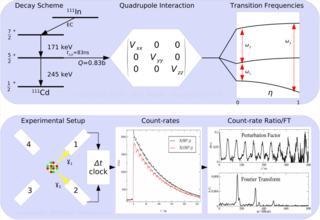 The perturbed γ-γ angular correlation, PAC for short or PAC-Spectroscopy, is a method of nuclear solid-state physics with which magnetic and electric fields in crystal structures can be measured. In doing so, electrical field gradients and the Larmor frequency in magnetic fields as well as dynamic effects are determined. With this very sensitive method, which requires only about 10-1000 billion atoms of a radioactive isotope per measurement, material properties in the local structure, phase transitions, magnetism and diffusion can be investigated. The PAC method is related to nuclear magnetic resonance and the Mössbauer effect, but shows no signal attenuation at very high temperatures. Today only the time-differential perturbed angular correlation (TDPAC) is used.