The decimal halfpenny (​1⁄2p) (Irish : leathphingin) coin was the smallest denomination of the Irish pound. It was first issued when the Irish currency was decimalised on Decimal Day, 15 February 1971. It was one of three new designs introduced all in bronze and featuring ornamental birds on the reverse. The coin value was weakened by inflation and very few were produced beyond the initial run for 1971. It was removed from circulation and demonetised on 1 January 1987.

On 15 February 1971, known as Decimal Day, the United Kingdom and Ireland decimalised their currencies.

The main reason that halfpennies were issued was that when shillings were decimalised they were worth five new pence, so a sixpence (half of a shilling) yielded a value of ​2 1⁄2 new pence. 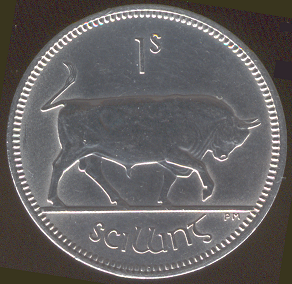 The shilling (1s) coin was a subdivision of the pre-decimal Irish pound, worth ​1⁄20 of a pound. 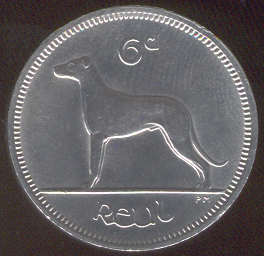 The sixpence coin was a subdivision of the pre-decimal Irish pound, worth ​1⁄40 of a pound or ​1⁄2 of a shilling. The Irish name (reul) is derived from the Spanish real. In most of the 19th century, 1 pound was equal to 5 dollars, and 1 dollar was equal to 8 reales, therefore a real was equal to 1/40 of a pound, i.e. 6 pence.

Its dimensions and appearance were the same as the British coin of the same denomination as the pounds of Britain and Ireland were pegged until 1979.

The coin was designed by the Irish artist Gabriel Hayes and the design is adapted from the manuscript Cologne Collectio Canonum (Cologne, Dombibliothek Cod. 213) in Cologne. The coin has a diameter of 1.7145 centimetres and mass of 1.782 grams consisting of copper, tin and zinc.

Gabriel Hayes (1909–1978) was an Irish artist born in Dublin, Ireland. She was a sculptor who studied in Dublin, France, and Italy. Hayes was also an accomplished painter with one of her works "The Cork Bowler" selling at Christies in London in May 2000 for 23,500 stg. Most of her works are in private hands. 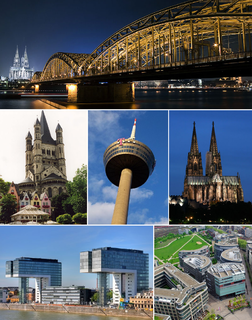 Cologne is the largest city of Germany's most populous federal state of North Rhine-Westphalia, and its 1 million+ (2016) inhabitants make it the fourth most populous city in Germany after Berlin, Hamburg, and Munich. The largest city on the Rhine, it is also the most populous city both of the Rhine-Ruhr Metropolitan Region, which is Germany's largest and one of Europe's major metropolitan areas, and of the Rhineland. Centred on the left bank of the Rhine, Cologne is about 45 kilometres (28 mi) southeast of North Rhine-Westphalia's capital of Düsseldorf and 25 kilometres (16 mi) northwest of Bonn. It is the largest city in the Central Franconian and Ripuarian dialect areas.

The 1985 version of this coin is particularly rare, and valuable to coin collectors - the vast majority of the 2.8 million were melted in 1987. The 1986 coin was only produced for the 1986 specimen sets and is also rare.

Decimalisation is the conversion of a measurement system to units related by powers of 10, replacing traditional units that are related in other ways, such as those formed by successive doubling or halving, or by more arbitrary conversion factors. Units of physical measurement, such as length and mass, were decimalised with the introduction of the metric system, which has been adopted by almost all countries with the prominent exception of the United States. Thus a kilometre is 1000 metres, while a mile is 1,760 yards. Electrical units are decimalised worldwide. Common units of time remain undecimalised; although an attempt was made during the French revolution, this proved to be unsuccessful and was quickly abandoned.

The British pre-decimal halfpenny coin, usually simply known as a halfpenny, historically occasionally also as the obol, was a unit of currency that equalled half of a penny or ​1⁄480 of a pound sterling. Originally the halfpenny was minted in copper, but after 1860 it was minted in bronze. It ceased to be legal tender in 1969, in the run-up to decimalisation. The halfpenny featured two different designs on its reverse during its years in circulation. From 1672 until 1936 the image of Britannia appeared on the reverse, and from 1937 onwards the image of the Golden Hind appeared. Like all British coinage, it bore the portrait of the monarch on the obverse.

The farthing was the lowest value coin of the pre-decimal Irish pound, worth a quarter of a penny, ​1⁄48 of a shilling or ​1⁄960 of a pound. The coin had lost much of its value through inflation long before decimalisation in 1971, and during the 1960s no farthings were produced for general circulation; those minted in 1966 were produced for collectors' sets.

The halfpenny coin was the second smallest denomination of the pre-decimal Irish pound, worth ​1⁄480 of a pound or ​1⁄24 of a shilling. First issued in 1928 it ceased to be legal tender on 1 August 1969.

The decimal one penny (1p) coin was the second smallest denomination of the Irish pound. It was first issued when the Irish currency was decimalised on Decimal Day, 15 February 1971. It was the second of three new designs introduced all in bronze, the others being a half-penny and a two pence coin. All featured ornamental birds designed by Irish artist Gabriel Hayes on the reverse. 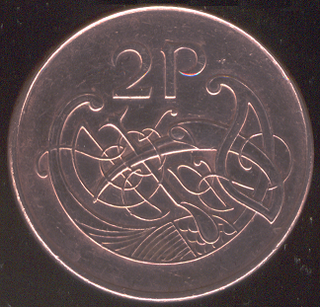 The two pence (2p) coin was the third smallest denomination of the Irish pound. It was first issued when the Irish currency was decimalised on Decimal Day, 15 February 1971. The coin was minted until 2000. It was the third of three new designs introduced all in bronze, the others being the halfpenny and penny. All featured ornamental birds on the reverse.