Hallvard Vebjørnsson (Hallvard Den Hellige) (c. 1020 – 1043), commonly referred to as Saint Hallvard (Sankt Hallvard), was the patron saint of Oslo. He is considered a martyr because of his defence of an innocent thrall woman. His religious feast day is 15 May.

The connection of St. Hallvard to the city of Oslo was evidenced by the fact that his image was recorded in the city's seal since the Middle Ages. The municipality's highest honor, the St. Hallvard Medal (St. Hallvard-medaljen), was named after him in 1950. [1]

Little is known of his life, and all traditional stories relate to his death near Drammen. Although the exact year of birth and place of his birth are unknown, he is commonly believed to have been born ca. 1020 According to tradition, his father was the farmer Vebjørn. His parents were wealthy farmers and owned the farm Husaby in Lier. His mother, Torny Gudbrandsdatter, was reportedly related to St. Olaf, the patron saint of Norway. It is said that she was the daughter of Gudbrand Kula from Oppland, who was also the father of Åsta Gudbrandsdatter, St. Olaf's mother. [2]

Hallvard defended a pregnant woman, most likely a thrall, who had been given sanctuary from three men accusing her of theft. Hallvard believed in her innocence and took her on his boat. Hallvard, together with the woman, were killed by arrows from the men. The woman was buried on the beach. Hallvard, however, was bound with a millstone around his neck, and the men attempted to drown his body in Drammensfjord but it refused to sink and as a result their crimes were discovered. A local village buried him in a Christian manner and people came to regard him as a martyr to their faith. [3]

St. Hallvard's Cathedral (Hallvardskatedralen) in Oslo was dedicated to his name and his remains were relocated to the facility which was finished in 1130.

The Cathedral was built on the hill just north of the area that is now the Old Town market square in Oslo (intersection of Bispegata –Oslo gate). For almost 500 years this was the most important church in the city. Besides being the bishop's seat and religious center, the cathedral was the coronation church, the royal wedding church and the royal burial chapel. The facility was in use as a church until about 1655. It fell into disrepair in the 17th century and is today a ruin situated in Minneparken. [4] [5] [6] [7]

15th May is celebrated as St. Hallvard's Day. This is also known as Oslo Day.

Olaf II Haraldsson, later known as St. Olaf, was King of Norway from 1015 to 1028. Son of Harald Grenske, a petty king in Vestfold, Norway, he was posthumously given the title Rex Perpetuus Norvegiae and canonised at Nidaros (Trondheim) by Bishop Grimkell, one year after his death in the Battle of Stiklestad on 29 July 1030. His remains were enshrined in Nidaros Cathedral, built over his burial site. His sainthood encouraged the widespread adoption of the Christian religion among the Vikings / Norsemen in Scandinavia.

Canute IV, later known as Canute the Holy or Saint Canute, was King of Denmark from 1080 until 1086. Canute was an ambitious king who sought to strengthen the Danish monarchy, devotedly supported the Roman Catholic Church, and had designs on the English throne. Slain by rebels in 1086, he was the first Danish king to be canonized. He was recognized by the Roman Catholic Church as patron saint of Denmark in 1101. 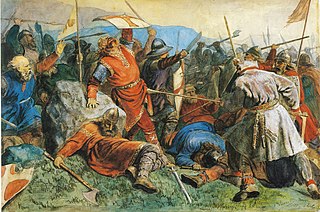 The Battle of Stiklestad in 1030 is one of the most famous battles in the history of Norway. In this battle, King Olaf II of Norway was killed. During the pontificate of Pope Alexander III, the Roman Catholic Church declared Olaf a saint in 1164. 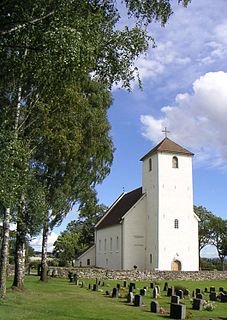 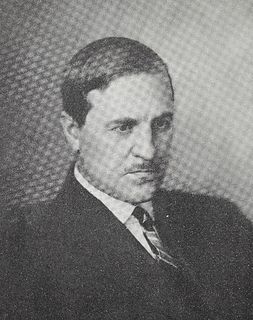 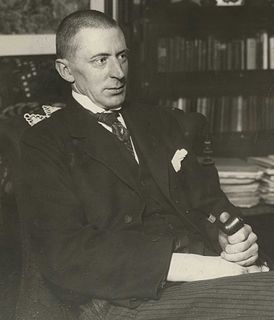 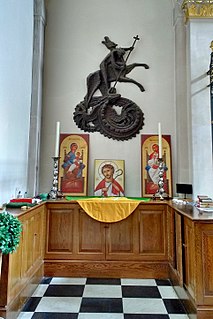 Ragnhild Butenschøn, née Jakhelln was a Norwegian sculptor. She was especially known for her church art. 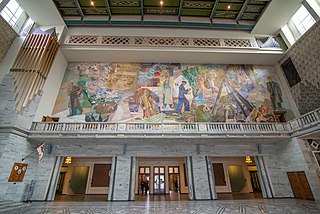 Håkon Andreas Christie was a Norwegian architectural historian, antiquarian and author. Together with his wife, Sigrid Marie Christie he worked from 1950 on the history of Norwegian church architecture, particularly stave churches. Their research resulted in Norges Kirker which consisted of seven major volumes covering churches in Østfold, Akershus and Buskerud.

Halvor Arntzen Schou was a Norwegian industrialist. He was the founder of the Hjula Væveri weaving mill in Oslo.

St. Hallvard's Cathedral (Hallvardskatedralen) was the former Oslo Cathedral. It fell into disrepair in the 17th century and is today in ruins. The site is located between Bispegata and St. Halvards gate in Oslo, Norway.

Nicolai Marius "Nic" Schiøll was a Norwegian sculptor and painter. He was most known for his public works, ornamental sculptures and memorials. 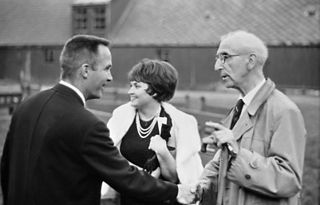 Gerhard Fischer was a Norwegian architect and archaeologist.

St. Olavsleden, is a pilgrim's way between Selånger outside Sundsvall in Sweden and Nidaros Cathedral in Trondheim in Norway, commemorating Saint Olaf who was King of Norway from 1015 to 1028. St. Olavsleden was one of the Pilgrim's Routes. From the 1970s until 2012, it was called the Mittnordenleden.