Hasan earned a masters in pharmacy (1994), a diploma in clinical laboratory sciences (1998), and a doctorate in molecular biology, all from the Moscow Medical Academy (1999). [1] He served as the head of the Medical Laboratory Division of the al Maias Hospital Shtoura from 2000 to 2009. [1] Hasan worked as a lecturer at the Lebanese University and the Lebanese International University from 2003 to 2014.

Sheikh Hamad bin Khalifa bin Hamad bin Abdullah bin Jassim bin Mohammed Al Thani is a member of the ruling Al Thani Qatari royal family. He was the ruling Emir of Qatar from 1995 until 2013 when he abdicated the throne, handing power to his son Tamim bin Hamad al-Thani. The Qatari government refers to him as the Father Emir.

The Emir of the State of Qatar is the monarch and head of state of Qatar, as well as the commander-in-chief of the Armed Forces and guarantor of the Constitution. It is the most powerful position in the country, and has a prominent role in foreign relations.

Nabih Berri is a Lebanese Shiite politician who has been serving as Speaker of the Parliament of Lebanon since 1992. He heads the Amal Movement.

Sheikh Tamim bin Hamad Al Thani is the Emir of Qatar. He is the fourth son of the previous Emir, Hamad bin Khalifa. He has been the ruler of Qatar since 2013 when his father abdicated the throne. Tamim had been the heir apparent since 2003 when his older brother Sheikh Jassim renounced his claim to the throne. 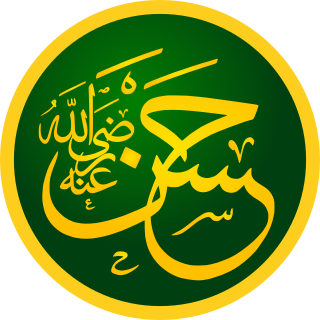 Hassan or Hasan is an Arabic masculine given name in the Muslim world.

Abdullah bin Hamad Al Attiyah is the former deputy prime minister of Qatar and the head of the Emir's court.

His Excellency Sheikh Hamad bin Jassim bin Jaber bin Mohammed bin Thani Al Thani is a Qatari politician. He was the Prime Minister of Qatar from 3 April 2007 to 26 June 2013, and foreign minister from 11 January 1992 to 26 June 2013.

Sheikh Hamad bin Thamer bin Mohammed Al Thani is the chairman of the board of the Al Jazeera Media Network, which is based in Qatar. He also served briefly as director general until the appointment of Dr. Mostefa Souag and has served as president of the board of administration.

Ali Habib Mahmud was a Syrian military officer who served as Syria's minister of defense from June 2009 to August 2011. As one of Syria's most celebrated generals, he was part of President Bashar al-Assad's inner circle.

Mohammed Hasan Kamaluddin is a Bahraini former minister, poet, ex-diplomat, historian, writer and researcher. He is best known for having published the first Encyclopedia of Bahraini History, stretching from 3000 B.C. to the modern Bahraini state. It is the largest and first work of its kind in the GCC region. 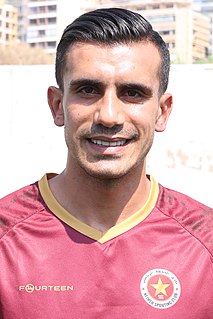 Hassan Ali Chaito, also known as Moni, is a Lebanese professional footballer and former futsal player who plays as an attacking midfielder for Lebanese Premier League club Nejmeh and the Lebanon national team. A versatile player, Chaito can also play as a left midfielder, as well as in a false nine role. His main attribute is his finishing.

Hamad bin Ali Al Attiyah is a Qatari politician who served as the State Minister for Defense. He oversaw the deployment of Qatari forces during the Libyan Civil War as Chief of Staff of the Armed Forces.

Mohamed Ali Hasan Ali is a Bahraini politician who is currently a Member of the Consultative Council.

Hamad Al-Marzouqi is an Emirati footballer. He currently plays as a right back Al Dhafra.

Ammar Sami Ali Hasan Qambar is a Bahraini politician and businessman. He was sworn into the Council of Representatives on December 12, 2018, for the seventh district of Muharraq Governorate.

Hamad Mohammed Jassim Al-Matar is a member of the Kuwaiti National Assembly, and holds a doctorate in industrial chemistry.