The Hamdanid dynasty (Arabic : حمدانيون‎, romanized: Ḥamdānyūn) was a Shia Muslim Arab [1] [2] dynasty of northern Mesopotamia and Syria (890–1004). They descended from the ancient Banu Taghlib Christian tribe of Mesopotamia and Eastern Arabia.

The Hamdanid dynasty was founded by Hamdan ibn Hamdun. By 892–893, he was in possession of Mardin, after fighting the Kharijites of the Jazira. [3] In 895 Caliph al-Mutadid invaded, and Hamdan fled Mardin. [3]

Hamdan's son Husayn, who was at Ardumusht, joined the caliph's forces. [3] Hamdan later surrendered to the caliph and was imprisoned. [3] In December 908, Husayn conspired to establish Ibn al-Mu'tazz as Caliph. Having failed, Husayn fled until he asked for mediation through his brother Ibrahim. Upon his return he was made governor of Diyar Rabi'a. [3] In 916, Husayn, due to a disagreement with vizier Ali b. Isa, revolted, was captured, imprisoned, and executed in 918. [3]

Hamdan's other son, Abdallah, was made governor of Mosul in 905–906. [4] He conducted campaigns against the Kurds in that region and in 913-914 was dismissed from his post and subsequently revolted. [3] Abdallah submitted himself to Mu'nis, and with his pardon was made governor of Mosul in 914-915. [3] During his brother Husayn's revolt, both he and his brother Ibrahim were temporarily imprisoned. [3] By 919, Abdallah was commanding an army against Yusuf b. Abi l'Sadj, governor of Adharbaydjan and Armenia. [3]

The rule of Hassan Nasir al-Dawla (929–968), governor of Mosul and Diyar Bakr, was sufficiently tyrannical to cause him to be deposed by his own family.

His lineage still ruled in Mosul, a heavy defeat by the Buyids in 979 notwithstanding, until 990. After this, their area of control in northern Iraq was divided between the Uqaylids and the Marwanids.

Ali Sayf al-Dawla 'Sword of the State' ruled (945–967) northern Syria from Aleppo, and became the most important opponent of the Christian Byzantine Empire's re-expansion. His court was a centre of culture, thanks to its nurturing of Arabic literature, but it lost this status after the Byzantine conquest of Aleppo.

To stop the Byzantine advance, Aleppo was put under the suzerainty of the Fatimids in Egypt, but in 1003 the Fatimids deposed the Hamdanids.

The Uqaylid dynasty was a Shi'a Arab dynasty with several lines that ruled in various parts of Al-Jazira, northern Syria and Iraq in the late tenth and eleventh centuries. The main line, centered in Mosul, ruled from 990 to 1096. 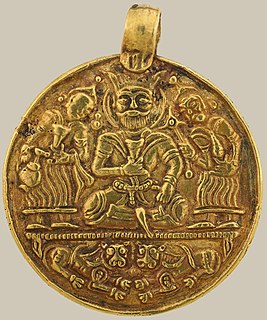 Fannā (Panāh) Khusraw, better known by his laqab of ʿAḍud al-Dawla was an emir of the Buyid dynasty, ruling from 949 to 983, and at his height of power ruling an empire stretching from Makran to Yemen and the shores of the Mediterranean Sea. He is widely regarded as the greatest monarch of the dynasty, and by the end of his reign was the most powerful ruler in the Middle East.

The Banu Taghlib, also known as Taghlib ibn Wa'il, were an Arab tribe that originated in Najd, but later migrated and inhabited the Jazira from the late 6th century onward. Their parent tribe was the Rabi'a, and they thus traced their descent to the Adnanites. The Taghlib were among the most powerful and cohesive nomadic tribes of the pre-Islamic era and were known for their bitter wars with their kinsmen from the Banu Bakr, as well as their struggles with the Lakhmid kings of al-Hira in Iraq. The tribe embraced Monophysite Christianity and remained largely Christian long after the advent of Islam in the mid-7th century. After early opposition to the Muslims, the Taghlib eventually secured for themselves an important place in Umayyad politics. They allied with the Umayyads and engaged in numerous battles with the rebellious Qaysi tribes during the Qays–Yaman feuding in the late 7th century.

ʿAlī ibn ʾAbū l-Hayjāʾ ʿAbdallāh ibn Ḥamdān ibn al-Ḥārith al-Taghlibī, more commonly known simply by his laqab of Sayf al-Dawla, was the founder of the Emirate of Aleppo, encompassing most of northern Syria and parts of western Jazira, and the brother of al-Hasan ibn Abdallah ibn Hamdan.

The Battle of Baghdad was fought between the forces of the Buyid Emirate of Iraq under Mu'izz al-Dawla and the Hamdanid Emirate of Mosul under Nasir al-Dawla within the city of Baghdad. The battle lasted for several months; it eventually ended in victory for the Buyids, who expelled the Hamdanids from Baghdad with a major offensive and secured control of the city.

Sa'd al-Dawla Abu 'l-Ma'ali Sharif, more commonly known by his laqab, Sa'd al-Dawla, was the second ruler of the Hamdanid Emirate of Aleppo, encompassing most of northern Syria. The son of the emirate's founder, Sayf al-Dawla, he inherited the throne at a young age and in the midst of a major Byzantine offensive that within two years conquered the western portions of his realm and turned Aleppo into a tributary state. Facing a multitude of rebellions and desertions until 977, Sa'd was unable even to enter his own capital, which was in the hands of his father's chief minister, Qarquya. By maintaining close relations with the Buyids, he managed to re-establish his authority in parts of the Jazira, but his rule was soon challenged by the rebellion of his governor Bakjur, who was supported by the Fatimids of Egypt. In turn, Sa'd came to rely increasingly on Byzantine assistance, although he continued to fluctuate in his allegiance between Byzantium, the Buyids, and the Fatimids.

Fadl Allah Abu Taghlib al-Ghadanfar ʿUddat al-Dawla, usually known simply by his kunya as Abu Taghlib, was the third Hamdanid ruler of the Emirate of Mosul, encompassing most of the Jazira.

Husayn ibn Hamdan ibn Hamdun ibn al-Harith al-Taghlibi was an early member of the Hamdanid family, who distinguished himself as a general for the Abbasid Caliphate and played a major role in the Hamdanids' rise to power among the Arab tribes in the Jazira.

The Kharijite Rebellion was a major Kharijite uprising against the Abbasid Caliphate between 866 and 896. Centered in the districts of Mosul and Diyar Rabi'a in the province of al-Jazira, the rebellion lasted for approximately thirty years, despite numerous attempts by both the central government and provincial authorities to quell it. It was finally defeated in 896 after the caliph al-Mu'tadid undertook several campaigns to restore caliphal authority in the region.

Hamdan ibn Hamdun ibn al-Harith al-Taghlibi was a Taghlibi Arab chieftain in the Jazira, and the patriarch of the Hamdanid dynasty. Alongside other Arab chieftains of the area, he resisted the attempts at re-imposition of Abbasid control over the Jazira in the 880s, and joined the Kharijite Rebellion. He was finally defeated and captured by Caliph al-Mu'tadid in 895, but was later released as a reward for the distinguished services of his son Husayn to the Caliph.

Ishaq ibn Kundaj or Kundajiq, was a Turkic military leader who played a prominent role in the turbulent politics of the Abbasid Caliphate in the late 9th century. Initially active in lower Iraq in the early 870s, he came to be appointed governor of Mosul in the Jazira in 879/80. He ruled Mosul and much of the Jazira almost continuously until his death in 891, despite becoming involved in constant quarrels with local chieftains, as well as in the Abbasid government's rivalry with the Tulunids of Egypt. On his death he was succeeded by his son, Muhammad, but in 892 the Abbasid government under Caliph al-Mu'tadid re-asserted its authority in the region, and Muhammad went to serve in the caliphal court.

Abu'l-Qasim al-Husayn ibn Ali al-Maghribi, also called al-wazir al-Maghribi and by the surname al-Kamil Dhu'l-Wizaratayn, was the last member of the Banu'l-Maghribi, a family of statesmen who served in several Muslim courts of the Middle East in the 10th and early 11th centuries. Abu'l-Qasim himself was born in Hamdanid Aleppo before fleeing with his father to Fatimid Egypt, where he entered the bureaucracy. After his father's execution, he fled to Palestine, where he raised the local Bedouin leader Mufarrij ibn Daghfal to rebellion against the Fatimids (1011–13). As the rebellion began to falter, he fled to Iraq, where he entered the service of the Buyid emirs of Baghdad. Soon after he moved to the Jazira, where he entered the service of the Uqaylids of Mosul and finally the Marwanids of Mayyafariqin. He was also a poet and author of a number of treatises, including a "mirror for princes".

Abu'l-Wafa Tuzun was a Turkish soldier who served first the Iranian ruler Mardavij ibn Ziyar and subsequently the Abbasid Caliphate. Rising to a position of leadership in the Abbasid army, he evicted the Hamdanid Nasir al-Dawla from Baghdad and assumed the position of amir al-umara on 31 May 943, becoming the Caliphate's de facto ruler. He held this position until his death in August 945, a few months before Baghdad, and the Abbasid Caliphate with it, came under the control of the Buyids.

Sa'id ibn Hamdan was an early member of the Hamdanid dynasty who served as provincial governor and military leader under the Abbasid Caliphate. He was the father of the celebrated poet Abu Firas al-Hamdani. 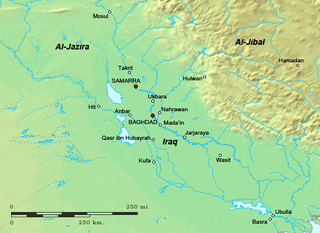 The Battle of al-Mada'in was fought near al-Mada'in in central Iraq between the armies of the Hamdanids and the Baridis, for control over Baghdad, the capital and seat of the Abbasid Caliphate, that was around 22 kilometres (14 mi) away and then under control of the Hamdanids. In a fiercely contested battle over four days that cost both sides many casualties, the Hamdanid army prevailed. They were too exhausted to pursue, however, which allowed the Baridis to withdraw to Wasit and then Basra.