listen )) is a town on the river Weser in Lower Saxony, Germany. It is the capital of the district of Hamelin-Pyrmont and has a population of roughly 57,000. Hamelin is best known for the tale of the Pied Piper of Hamelin.

Hamelin started with a monastery, which was founded as early as 851 AD. A village grew in the neighbourhood and had become a town by the 12th century. The incident with the "Pied Piper" (see below) is said to have happened in 1284 and may be based on a true event, although somewhat different from the tale. In the 15th and 16th centuries Hamelin was a minor member of the Hanseatic League.

In June 1634, during the Thirty Years' War, Lothar Dietrich, Freiherr of Bönninghausen, a General with the Imperial Army, lost the Battle of Oldendorf to the Swedish General Kniphausen, after Hamelin had been besieged by the Swedish army.

Hamelin was surrounded by four fortresses, which gave it the nickname "Gibraltar of the North". It was the most heavily fortified town in the Electorate of Hanover. The first fort (Fort George) was built between 1760 and 1763, the second (Fort Wilhelm) in 1774, a third in 1784, and the last (called Fort Luise) was built in 1806.

In 1806, Hamelin surrendered without fighting to the French forces, after Napoleon's victory at the Battle of Jena-Auerstedt. Napoleon's forces subsequently pulled down the town's historic walls, guard towers and the three fortresses at the other side of the river Weser. In 1843, the people of Hamelin built a sightseeing tower on the Klüt Hill, out of the ruins of Fort George. This tower is called the Klütturm and is a popular sight for tourists.

In 1867 Hamelin became part of the Kingdom of Prussia, which annexed Hanover in the aftermath of the Austro-Prussian War of 1866.

Between 1933 and 1937, the Nazi regime held the Reich Harvest Thanksgiving Festival at the nearby Bückeberg hill, to celebrate the achievements of Germany's farmers.

During the Second World War, Hamelin prison  [ de ] was used for the detention of Social Democrats, Communists, and other political prisoners. Around 200 died here; more died in April 1945, when the Nazis sent the prisoners on long marches, fearing the Allied advance. Just after the war, Hamelin prison was used by British Occupation Forces for the detention of Germans accused of war crimes. Following conviction, around 200 of them were hanged there, including Irma Grese, Josef Kramer, and over a dozen of the perpetrators of the Stalag Luft III murders. The prison has since been turned into a hotel. [3] Executed war criminals were interred in the prison yard until it became full; further burials took place at the Am Wehl Cemetery in Hameln. In March 1954, the German authorities began exhuming the 91 bodies from the prison yard; they were reburied in individual graves in consecrated ground in Am Wehl Cemetery. [3]

The coat of arms (German: Wappen) of Hamelin depicts the St. Boniface Minster, the oldest church in the city. [4]

Tale of the Pied Piper

The town is famous for the folk tale of the Pied Piper of Hamelin (German : Der Rattenfänger von Hameln), a medieval story that tells of a tragedy that befell the town in the 13th century. The version written by the Brothers Grimm made it popular throughout the world; it is also the subject of well-known poems by Johann von Goethe and Robert Browning. In the summer every Sunday, the tale is performed by actors in the town centre.

Hamelin is twinned with: [5]

The Deister- und Weserzeitung  [ de ], known as DeWeZet, publishes out of Hameln.

Hamelin was home to several Royal Engineer units, including 35 Engineer Regiment and 28 Amphibious Engineer Regiment until summer 2014, with many of the British families housed at Hastenbeck (Schlehenbusch) and Afferde. It was also home to the Royal Corps of Transport unit of 26 Bridging Regiment RCT, comprising 35 Sqn RCT and 40 Sqn RCT, until 1971. [6] 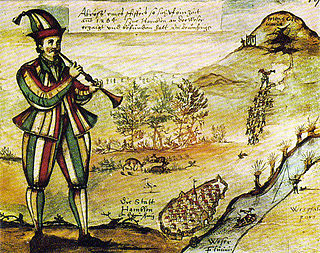 The Pied Piper of Hamelin is the title character of a legend from the town of Hamelin (Hameln), Lower Saxony, Germany.

Schaumburg is a district (Landkreis) of Lower Saxony, Germany. It is bounded by the districts of Nienburg, Hanover and Hamelin-Pyrmont, and the state of North Rhine-Westphalia. 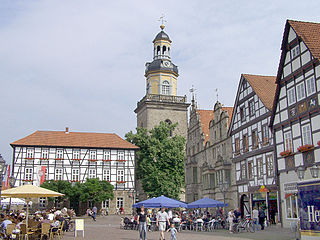 Rinteln is a small town in Lower Saxony, Germany. It is located on the banks of the Weser river above the Porta Westfalica. The town of Rinteln is in the broad valley between the hills of the Weserbergland and the North Lippe Bergland. In relation to some well known places, it is 60 kilometers west of Hanover, and just 20 kilometers from Hamelin of Pied Piper fame. Its population is about 28,500.

Holzminden is a district in Lower Saxony, Germany, with the town of Holzminden as its administrative capital. It is bounded by the districts of Hamelin-Pyrmont, Hildesheim and Northeim, and by the state of North Rhine-Westphalia. 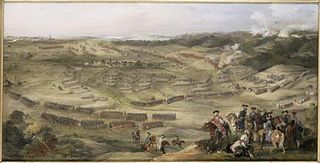 The Weser Uplands is a hill region in Germany, between Hannoversch Münden and Porta Westfalica, along the river Weser. The area reaches into three states, Lower Saxony, Hesse, and North Rhine-Westphalia. Important towns of this region include Bad Karlshafen, Holzminden, Höxter, Bodenwerder, Hameln, Rinteln, and Vlotho.

Bad Pyrmont is a town in the district of Hamelin-Pyrmont, in Lower Saxony, Germany, with a population close to 19,000. It is located on the river Emmer, about 10 km (6.2 mi) west of the Weser. Bad Pyrmont is a popular spa resort that gained its reputation as a fashionable place for princely vacations in the 17th and 18th centuries. The town is also the center of the Religious Society of Friends (Quakers) in Germany.

The MünchhausenstadtBodenwerder is a municipality in Holzminden district, Lower Saxony, Germany. It lies on the river Weser and is best known as the birthplace and residence of Baron von Münchhausen.

Rehburg-Loccum is a town 50 km north west of Hanover in the district of Nienburg in Lower Saxony, Germany. 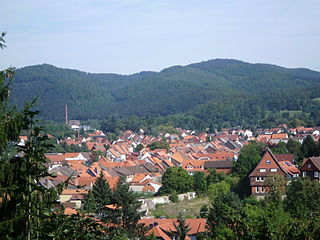 Herzberg am Harz is a town in the Göttingen district of Lower Saxony, Germany.

Barsinghausen is a town in the district of Hanover, in Lower Saxony, Germany. It is situated at the Deister chain of hills approx. 20 km west of Hanover. Barsinghausen belongs to the historic landscape Calenberg Land and was first mentioned in 1193.

Coppenbrügge is a municipality in the Hamelin-Pyrmont district, in Lower Saxony, Germany. It is situated approximatively 15 km east of Hamelin.

Achim, commonly Achim bei Bremen, is a municipality and the largest town in the district of Verden, in Lower Saxony, Germany. It is situated on the right bank of the Weser, approx. 17 km northwest of Verden, and 16 km southeast of Bremen.

Pattensen is a town in the district of Hanover, in Lower Saxony, Germany. It is situated approximately 12 km (7 mi) south of Hanover. 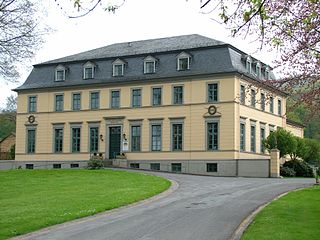 Springe is a town in the district of Hanover, in Lower Saxony, Germany. It is situated near the Deister hills, 22 kilometres (14 mi) southwest of Hanover.

Wennigsen is a municipality in the district of Hanover, in Lower Saxony, Germany. It is situated near the Deister hills, approx. 15 km southwest of Hanover.

Der Rattenfänger von Hameln is a grand opera in five acts by Viktor Nessler. The German libretto by Friedrich Hofmann is based on a 1875 romantic poem by Julius Wolff about the Pied Piper of Hamelin. 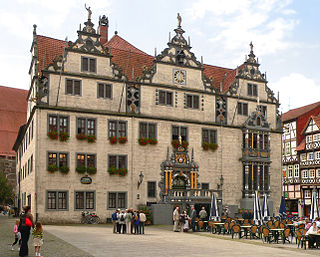 Hann. Münden is a town in Lower Saxony, Germany. Münden lies in the district of Göttingen at the confluence of the Fulda and Werra rivers, which join to form the Weser. It has about 24,000 inhabitants (2013). It is famous for its half-timbered houses, some of them more than 600 years old.

The Weser Uplands-Schaumburg-Hamelin Nature Park lies on the northern edge of the German Central Uplands where it transitions to the North German Plain, about 50 kilometres (31 mi) southwest of Hanover. The sponsor of the nature park, which was founded in 1975, is the state of Lower Saxony. The park extends along the Weser valley between Rinteln and Hamelin and includes parts of the Schaumburg Land, Calenberg, Lippe and Pyrmont Uplands from Bad Nenndorf in the north to Bad Pyrmont in the south, Bückeburg and Bad Eilsen in the west and Bad Münder and Osterwald in the east. Its highest elevation is in the Süntel hills.