Last updated August 25, 2021
Not to be confused with Hammarby Fotboll.
This article is about Hammarby IF's women football department. For other departments of the club, see Hammarby IF.
Football club

Hammarby IF Fotbollförening, commonly known as Hammarby IF, Hammarby Fotboll or simply Hammarby [1] (Swedish pronunciation:  [ˈhâmːarˌbyː] or, especially locally, [-ˌbʏ]), is a women's football club from Stockholm founded in 1970.

Hammarby play their home games at Hammarby IP (also called Kanalplan) in the Södermalm district of Stockholm, and occasionally at Zinkensdamms IP and Tele2 Arena. [2]

Competing in Sweden's first tier, Damallsvenskan, Hammarby are placed fifth in the all-time Damallsvenskan table, and has won the Swedish championship once, in 1985.

The club's colours are green and white, which is reflected in its crest and kit.

Since 2016, the club has been affiliated with Hammarby Fotboll, a men's team in Allsvenskan, and is a member of the Stockholms Fotbollförbund through its parent club. [3]

The club has gone through several reconstructions through the years. The original women's team was first founded in 1970 as a section under Hammarby IF. In 1999 the association was reorganized and all the underlying sections got separated into an umbrella organization. [4] The club Hammarby IF DFF was then founded, with the latter letters meaning damfotbollsförening. Before the start of the 2017 season, Hammarby IF DFF was merged with Hammarby Fotboll, which previously only included the men's division. [5] [6]

The team declined from 2005 and in 2011 it was relegated to First Division for the first time. [9] Before its relegation it was one of only two teams (the other one being FC Rosengård) to have played all 24 editions of the Damallsvenskan to date since the competition's foundation in 1988.

In modern years, Hammarby has been a typical yo-yo club. They finished the 2014 Elitettan season in 2nd place & gained promotion back to the Damallsvenskan. However, they enjoyed a short stint in the top tier getting relegated in 2015. In 2016, the club once again gained a promotion from the second tier. [10]

In recent seasons Hammarby have had the following results and average attendances:

AIK Fotboll, more commonly known simply as AIK, an abbreviation for Allmänna Idrottsklubben, is a Swedish football club competing in Allsvenskan, the top flight of Swedish football. The club was founded 1891 in Stockholm and the football department was formed in 1896. AIK's home ground is Friends Arena, located in Solna, Metropolitan Stockholm.

Idrottsföreningen Brommapojkarna, more commonly known as Brommapojkarna or simply BP, is a Swedish football club located in the borough of Bromma, in the western parts of Stockholm municipality. Brommapojkarna is the largest football club in Europe in terms of the number of active teams of all ages – in 2007 there were 247 teams and 3,000 players. The women's team plays in Elitettan, the Second tier. There is also a floorball department.

AIK Fotboll Damer is a Swedish women's association football club from Stockholm, currently competing in the Damallsvenskan. The team, a section of AIK, is affiliated to the Stockholms Fotbollförbund and plays in the Skytteholms IP in Solna, Stockholm.

Jitex BK is a football club in Mölndal, Sweden, that competes in Swedish Women's Football Division 1, the third tier of Swedish women's football. The club was founded January 21, 1971 and previously played in the Elitettan, Sweden's second highest division, and the top division league, the Damallsvenskan.

Tyresö FF is a Swedish men's association football team in Tyresö, a municipality in Stockholm County. They are associated with the Tyresö FF women's team, which plays in the top tier of the Damallsvenskan. The men's team currently play in the Swedish Division 3.

IK Frej is a Swedish sports club located in Täby kyrkby. It currently plays in Division 4, the sixth tier in Swedish football.

Kvarnsvedens IK is a Swedish football club located in Borlänge in Dalarna County.

Eskilstuna United DFF is a football club from Eskilstuna, in Södermanland County, Sweden. The club was established in 2002 and was promoted into the Women's Premier Division (Damallsvenskan) for the first time in 2014.

Emma Linnea Lundh is a Swedish footballer. She plays as a forward for Swedish club IF Brommapojkarna and the Sweden women's national football team. Before joining England's Liverpool in 2016, Lundh had played for several teams in Sweden and for Norwegian Toppserien club LSK Kvinner FK. 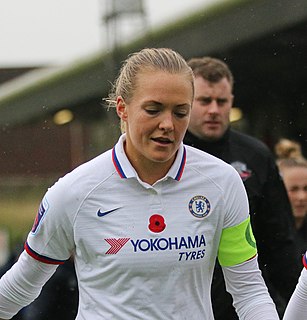 Magdalena Lilly Eriksson is a Swedish footballer who plays as a defender for Chelsea Women in the English Women's Super League as well as for the Swedish national team. A left and centre-back, she used to play for Hammarby IF, Djurgårdens IF and Linköpings FC in the Swedish Damallsvenskan. In November 2020, she was awarded the Diamantbollen award.

2015 Damallsvenskan was the 27th season of the Swedish women's association football top division, Damallsvenskan. It was played between 11 April 2015 and 18 October 2015. FC Rosengård were the defending champions, having won the competition in 2014. They successfully defended their title and together with Eskilstuna United qualified for the 2016–17 UEFA Women's Champions League.

The 2019 Damallsvenskan was the 32nd season of the Swedish women's association football top division, Damallsvenskan. It began on 13 April 2019, and ended on 26 October. Kopparbergs/Göteborg FC are the defending champions, having won the competition in 2018.

The 2020 Damallsvenskan was the 33rd season of the Swedish women's association football top division, Damallsvenskan. The league was originally set to commence on 3 April 2020, but due to the effects of the COVID-19 pandemic it was postponed, and eventually set to begin on 27 June, and end on 15 November. All matches were played without spectators.

The 2021 Damallsvenskan is the 34th season of the Swedish women's association football top division, Damallsvenskan. The league began on 17 April 2021, and will end on 6 November 2021.