Last updated August 02, 2021
This article is about Hammarby IF's boxing department. For other departments of the club, see Hammarby IF.
Boxing club in Stockholm, Sweden

Hammarby IF Boxningsförening, commonly known as Hammarby Boxning, is a Swedish boxing club based in Stockholm. It is one of Sweden's oldest boxing clubs, founded in 1919, and a section of Hammarby IF. Their gym is located in Södermalm, an area the club considers its heartland. [3] [4]

The boxing department was founded in 1919 as part of the multi-sports club Hammarby IF. Together with nine other clubs, Hammarby also helped to form the Swedish Boxing Association the same year. [3] The members of Hammarby exclusively consisted of young men from the working class, employed as industrial workers at one of the many factories in the Södermalm district. [5] [3]

Hammarby produced several successful amateur boxers in the 1920s, among those Lars Mellström and most notably Gunnar Berggren, who finished third in the lightweight class at the 1928 Olympics in Amsterdam. Berggren is the only Hammarby athlete that has ever won an Olympic medal in an individual sport. [4] In 1930, however, Hammarby found themselves in financial difficulties, after arranging a loss-making boxing gala at Cirkus, and the boxing department was dissolved. [3]

In 1969, Hammarby took up boxing again, merging with local clubs Sparta BK and Årsta BK. The same year, the club moved into its current gym at Kocksgatan in the central part of Södermalm, which is the oldest of its kind in Sweden. The acclaimed writer and illustrator Stig "Slas" Claesson started train at the club and helped to raise funds, later being elected an honorary member for life. An other frequent celebrity guest in the 1970s was singer Olle Adolphson. [6] [3]

In the 1980s, thanks to journalist and lifelong Hammarby-fan Börje Dorch, the club recruited Lotfi Ayed and Roger Andersson, who both went on to win several Swedish Championships. [3]

Since 2014, Hammarby has arranged the annual boxing gala "Bajen Rough House" in Eriksdalshallen, attracting an attendance of roughly 1,000 people, facing other clubs such as local rivals Djurgårdens IF and Panathinaikos from Greece. [7] 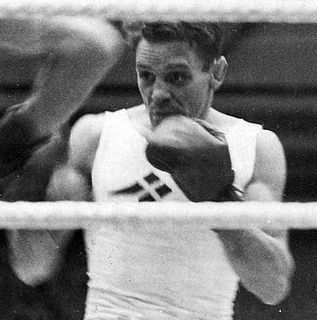 Gunnar Alf Erik Berggren was a Swedish boxer who won bronze medals in the lightweight division at the 1927 European Championships and 1928 Summer Olympics. After the Olympics he turned professional and had a record of 13 wins, 9 losses and 10 draws, before retiring in 1936. He competed for Hammarby IF throughout his whole career.

Anthony Yigit (born 1 September 1991) is a Swedish professional boxer. As an amateur, following his success in 2011 World Amateur Boxing Championships, Yigit qualified for the 2012 Summer Olympics.