Hamtaro, known in Japan as Trotting Hamtaro (とっとこハム太郎, Tottoko Hamutarō), is a Japanese manga and storybook series created and illustrated by Ritsuko Kawai about a hamster. The manga is serialized in Shogakukan's all-girl's magazine Ciao in 1997, focusing on a hamster named Hamtaro who has a variety of adventures with other hamsters, known as "Ham-Hams" ("Hamuchans" in the Japanese version). Viz Media published the manga adaptations and storybooks in English. [3] [4]

Multiple anime adaptations were produced by TMS Entertainment and aired on TV Tokyo. The first series was dubbed in English by The Ocean Group.

The series revolves around a hamster named Hamtaro, who is owned by a 10-year-old girl named Hiroko Haruna (Laura Haruna in the English dub). Curious by nature, he ventures out each day to make friends and go on adventures with a clan of fellow hamster friends known as The Ham-Hams. The Ham-Hams meet at a special clubhouse built by Boss ("Taisho").

There are three manga about Hamtaro, A Home for Hamtaro, Hamtaro Gets Lost, and Jealous Hamtaro. In the first two, Hamtaro's owner is named Yukari while in the latter, her name is Amy.

In Japan, Hamtaro aired three anime series, released four movies, several specials, many video game/DVD releases and merchandise. By 2002, the franchise had generated $2.5 billion in merchandise sales. [5] The success was not paralleled in the United States, however, with only the first series, some special episodes, three video games (though two others were released in Europe), and limited merchandise. On 23 February 2011, it was announced that Hamtaro would be receiving a series titled Tottoko Hamtaro Dechu. [6]

The Hamtaro franchise has multiple video game titles with independent storylines. These titles include adventure and educational games that can be found for PC, Game Boy Color, Game Boy Advance (GBA), and the Nintendo DS consoles.

On 26 July 2020, a group of more than 2,000 protesters in Bangkok called the Free Youth Movement, led a protest against the government of Thailand which involved singing the theme song for Hamtaro with modified lyrics to say "The most delicious food is taxpayers’ money. [...]Dissolve the parliament! Dissolve the parliament! Dissolve the parliament!" [9] Other student protests during the same week have continued using Hamtaro as a symbol for the government's "feasting on taxpayer's money," and have involved groups running in circles, as if in hamster wheels, while singing the modified version of the jingle. [10] [11]

Oruchuban Ebichu (おるちゅばんエビちゅ) is a Japanese manga series by Risa Itō. that was published by Futabasha Publishers. It first ran through Shufutoseikatsusha magazine Giga&chan, beginning in the 1990 and next moving to Action Pizazz, publication by Futabasha.

Rikako Aikawa is a Japanese actress and voice actress affiliated with Atomic Monkey. She was born in Kanagawa Prefecture, Japan. She was originally a child actress. Her real name after she married Mitsuo Iwata, a Japanese voice actor, is Nahomi Iwata. 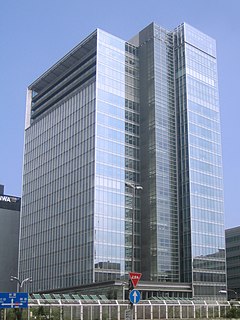 Enterbrain (エンターブレイン), formerly Enterbrain, Inc., is a Japanese publisher and division of Kadokawa Future Publishing founded on 30 January 1987 as ASCII Film Co., Ltd.. Magazines published by Enterbrain are generally focused on video games and computer entertainment as well as video game and strategy guides. In addition, the company publishes a small selection of anime artbooks. Enterbrain is based in Tokyo, Japan, with a paid-in capital of 410 million yen. Enterbrain's current president is Hirokazu Hamamura. 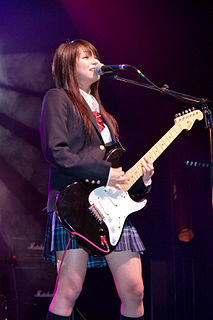 Haruna is both a feminine Japanese given name and a Japanese surname.

Ritsuko Kawai is a Japanese manga artist known as the creator of the Hamtaro franchise. Kawai originally created Hamtaro as storybooks for children first published in 1997 and adapted into an anime television series in Japan in July 2000.

V Jump is a Japanese shōnen manga magazine, focusing on new manga as well as video games based on popular manga. The magazine's debut was in 1993 by Shueisha under the Jump line of magazines. 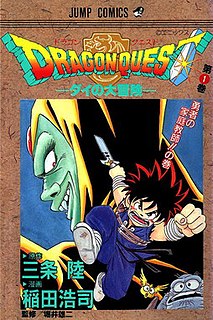 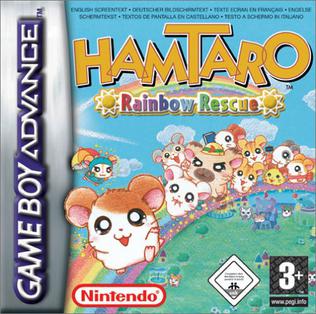 Hamtaro: Rainbow Rescue is an adventure video game developed by AlphaDream for Game Boy Advance. It was released by Nintendo in Japan and PAL regions, and was set to be released in North America, but was cancelled. It is based on the Hamtaro series by Ritsuko Kawai.

Kurumi Mamiya is a Japanese voice actress from Yasu, Shiga Prefecture. She is affiliated with 81 Produce. She has been known for her voice role as Hamtaro.

Hamtaro: Ham-Hams Unite! is an adventure video game developed by Pax Softnica and published by Nintendo for the Game Boy Color handheld video game console. It is based on the Hamtaro anime and features much of the same characters. It launched in Japan in 2001, and later came to North America and Europe in 2002 and 2003 respectively. It was the final video game published on the Game Boy Color by Nintendo. Players control the hamster Hamtaro, who is tasked with gathering his friends and returning them to the clubhouse as well as collecting words missing from the Hamchat dictionary.

Soul Eater is a Japanese manga series written and illustrated by Atsushi Ōkubo. Set at the "Death Weapon Meister Academy", the series revolves around three teams, each consisting of a weapon meister and weapon that can transform into a humanoid. Trying to make the latter a "death scythe" and thus fit for use by the academy's headmaster Shinigami, the personification of death, they must collect the souls of 99 evil humans and one witch, in that order; otherwise, they will have to start all over again.

Hamtaro is a series of video games based on the Hamtaro anime series.

Dr. Ramune: Mysterious Disease Specialist is a Japanese manga series written and illustrated by Aho Toro. The manga was serialized in Kodansha's Monthly Shōnen Sirius magazine from September 2017 to July 2018, before being transferred to Magazine Pocket manga app in August 2018 and finished in February 2021. The manga is licensed in North America by Kodansha USA. An anime television series adaptation by Platinum Vision aired from January to March 2021.