Hanagatami (花筐, lit. "Flower Basket") is a 2017 Japanese war film directed by Nobuhiko Ōbayashi, based on a 1937 novel by Kazuo Dan. [1] The film tells a story of the purity of youth beset by the chaos of war, inspired by Obayashi's own childhood. It revolves around Toshihiko, a sixteen-year-old kid who moves in with his aunt in Karatsu, and develops friendships and romances with the inhabitants of the town as World War II rages. The film was originally conceived during the 1970s, [2] before Obayashi made his feature film directorial debut with House (1977), but was not produced for another 40 years. Before production, Obayashi was diagnosed with stage-four cancer and was only given a few months to live.

Hanagatami received acclaim, garnering numerous awards, including the Best Film Award at the 72nd Mainichi Film Awards. [3] It was praised for its exuberant and vibrant visuals, its experimental and psychedelic direction and editing, its strong anti-war message and its sense of personalness. It is the third installment in a thematic trilogy of modern anti-war films by Obayashi, along with Casting Blossoms to the Sky (2012) and Seven Weeks (2014). [4]

In the spring of 1941, sixteen-year-old Toshihiko leaves Amsterdam to attend school in Karatsu, a small town on the western coast of Japan, where his aunt Keiko cares for his ailing cousin Mina. Immersed in the seaside's nature and culture, Toshihiko soon befriends the town's other extraordinary adolescents as they all contend with the war's inescapable gravitational pull. 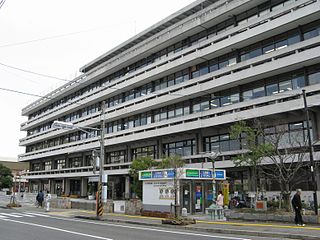 Naomi Kawase is a Japanese film director. She was also known as Naomi Sento, with her then-husband's surname. Many of her works have been documentaries, including Embracing, about her search for the father who abandoned her as a child, and Katatsumori, about the grandmother who raised her.

Antarctica is a 1983 Japanese drama film directed by Koreyoshi Kurahara and starring Ken Takakura. Its plot centers on the 1958 ill-fated Japanese scientific expedition to the South Pole, its dramatic rescue from the impossible weather conditions on the return journey, the relationship between the scientists and their loyal and hard-working Sakhalin huskies, particularly the lead dogs Taro and Jiro, and the fates of the 15 dogs left behind to fend for themselves. 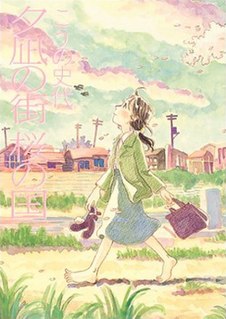 Town of Evening Calm, Country of Cherry Blossoms is a one-volume manga written and illustrated by Fumiyo Kōno. The two connected stories were first published in Japan by Futabasha in Weekly Manga Action in 2003 and 2004, then collected in a single tankōbon volume in 2004. The story is about a family of survivors of the atomic bombing of Hiroshima. The author based the characters on people who were in Hiroshima or Nagasaki. 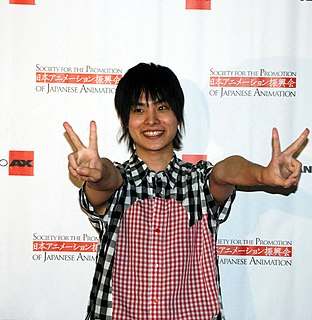 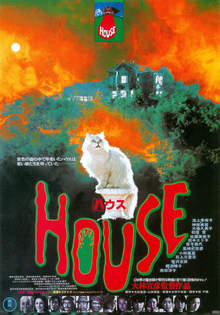 House is a 1977 Japanese comedy horror film directed and produced by Nobuhiko Obayashi. The film stars mostly amateur actors with only Kimiko Ikegami and Yōko Minamida having any notable previous acting experience. The film is about a schoolgirl traveling with her six classmates to her ailing aunt's country home, where they come face to face with supernatural events as the girls are, one by one, devoured by the home.

Nobuhiko Obayashi was a Japanese director, screenwriter and editor of films and television advertisements. He began his filmmaking career as a pioneer of Japanese experimental films before transitioning to directing more mainstream media, and his resulting filmography as a director spanned almost 60 years. He is best known as the director of the 1977 horror film House, which has garnered a cult following. He was notable for his distinct surreal filmmaking style, as well as the anti-war themes commonly embedded in his films.

Strangers is a novel by Taichi Yamada, published in 1987. The English translation by Wayne Lammers was published in 2003.

I Are You, You Am Me, also known as Exchange Students, is a 1982 Japanese fantasy film directed by Nobuhiko Obayashi. Obayashi himself directed and co-wrote a second film based on the same novel, premiered in 2007 and titled Switching: Goodbye Me. 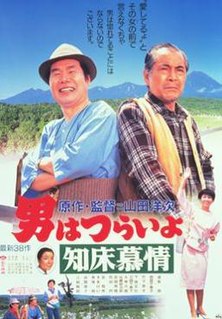 Seven Weeks is a Japanese drama film, produced in 2014, directed by Nobuhiko Obayashi. The film stars Tōru Shinagawa, Takako Tokiwa, Tokie Hidari, Takehiro Murata, Yutaka Matsushige, Shunsuke Kubozuka, Saki Terashima and Hirona Yamazaki. The screenplay by Obayashi and Tadashi Naito was based on the novel by Koji Hasegawa. The residents of the small northern town of Ashibetsu, where the film was set, helped fund the film.

Mina Sharon Myoi, known mononymously as Mina, is an American-born Japanese singer and dancer based in South Korea. She is a member of the girl group Twice, formed by JYP Entertainment. Mina is one of Twice's three Japanese members.

Labyrinth of Cinema is a 2019 Japanese anti-war fantasy drama film written, produced, directed and edited by Nobuhiko Obayashi. It stars Takuro Atsuki, Takahito Hosoyamada, and Yoshihiko Hosoda as three men who enter an old theater in present-day Onomichi, where they find themselves transported back to 1945, just prior to the atomic bombing of Hiroshima. The film's cast also includes Rei Yoshida, Riko Narumi, Hirona Yamazaki, and Takako Tokiwa.

The Garden of Women is a 1954 Japanese drama film directed by Keisuke Kinoshita. It is based on the novel Jinkō Teien by Tomoji Abe.

Emotion, stylized on-screen as Émotion, is a 1966 Japanese experimental short film directed by Nobuhiko Obayashi. It stars Emi Tabata as Emi, a young woman who travels from a seaside village to a city, where she meets another girl named Sari and encounters a vampire.

The 42nd Yokohama Film Festival (第４２回ヨコハマ映画祭) was held on 5 February 2021. Because of the COVID-19 pandemic, the physical awards ceremony was cancelled and an official pamphlet was released on 5 February 2021. The winners had been notified on 5 December 2020, and given their prizes individually.