Hans Kraay (14 October 1936 – 27 October 2017) was a Dutch football player (defence). Subsequently, he became well known for his football management skills as well as analysis of matches on Dutch television.

Born in Utrecht, Kraay made his professional debut at DOS and also played for Feijenoord.

After his playing career, Kraay became manager at DFC, Elinkwijk, Go Ahead Eagles, Ajax Amsterdam, AZ'67, Edmonton Drillers, Sparta Rotterdam (only two days due to some health trouble), FC Den Haag and Feyenoord Rotterdam. He also served Feyenoord and PSV Eindhoven as a technical director, as well as the NOS and other television channels with his views on football, both commentary and analysis. In 1986, he took place at PSV Eindhoven, as manager. The team was first in the League, but in March, 1987, he was replaced by Guus Hiddink, after a loss against FC Den Bosch, on penalties, for the KNVB Cup.

Feyenoord Rotterdam is a Dutch professional football club in Rotterdam, which plays in the Eredivisie, the top tier in Dutch football. Founded as Wilhelmina in 1908, the club changed to various names before settling on being called after its neighborhood in 1912 as SC Feijenoord, updated in 1974 to SC Feyenoord, and then to Feyenoord Rotterdam in 1978, when it split from the amateur club under its wing, SC Feyenoord. Since 1937, Feyenoord's home ground has been the Stadion Feijenoord, nicknamed De Kuip, one of the largest stadiums in the Netherlands. 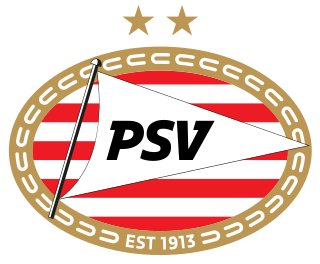 The Philips Sport Vereniging, abbreviated as PSV and internationally known as PSV Eindhoven, is a sports club from Eindhoven, Netherlands, that plays in the Eredivisie, the top tier in Dutch football. It is best known for its professional football department, which has played in the Eredivisie since its inception in 1956. Along with Ajax and Feyenoord, PSV is one of the country's "big three" clubs that have dominated the Eredivisie.

Ivan Nielsen is a Danish former professional football player, who most prominently played professionally for Dutch clubs Feyenoord Rotterdam and PSV Eindhoven, winning the European Cup with PSV. A central defender, he was capped 51 times for the Danish national team, and represented his country at 1986 World Cup and two European Championship tournaments. 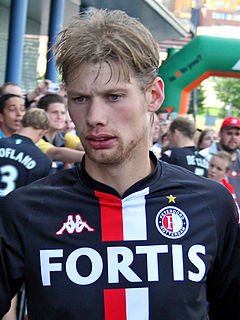 Theodorus Martinus Maria "Theo" Lucius is a Dutch former professional footballer. He could operate as a right back or a central defender, and also as a defensive midfielder.

József Kiprich is a retired Hungarian football forward and currently a football manager and scout. He made his debut for the Hungarian national team in 1984, and got 70 caps and 28 goals until 1995. He was a participant at the 1986 FIFA World Cup in Mexico, where Hungary failed to progress from the group stage. During his career he won two national championships, five national cups, two super cups and he became top goalscorer in a league twice.

Marinus "Rinus" David Israël is a Dutch former association football player and manager who is currently a scout. Nicknamed "Iron Rinus", he formed a solid defence line at Feyenoord with Theo Laseroms.

The history of Feyenoord, a Dutch football club formed in 1908, is among the longest and most successful in Dutch football. The club won their first national championship in 1924 and over nearly a century have won thirty major trophies. Feyenoord is based in the city of Rotterdam.

Hans Venneker is a retired Dutch footballer who was active as a goalkeeper, a right defender and forward. Venneker made his debut at Feijenoord and also played for NEC Nijmegen, Sparta Rotterdam and AS Montferrand. Venneker is the only player from Feyenoord who scored 5 goals in a single match against Ajax Amsterdam, Feyenoord won the game 9-4.

Fredericus (Fred) Jacobus Rutten is a football coach and a former footballer. As a player, Rutten spent his entire career with Twente during the years 1979 to 1992. Following his playing career he also managed FC Twente, before moving on to clubs like FC Schalke 04, PSV, Vitesse Arnhem, Feyenoord, Al Shabab, Maccabi Haifa and more recently Anderlecht.

The Beloften Eredivisie was the highest football league in for reserve teams in the Netherlands organized by the Royal Dutch Football Association (KNVB). The league was founded in 1992 as Reserve Teams Eredivisie and this name was in use until the 2000–01 season. The second teams are called beloften teams.

During the 2001–02 season, Feyenoord participated in the Eredivisie, the top-tier of Dutch football, as well as the KNVB Cup, UEFA Champions League, and the UEFA Cup.

Ab Fafié was a Dutch professional football player and manager.

The 2013–14 Eredivisie was the 58th season of Eredivisie since its establishment in 1955. It began on 2 August 2013 with the first match of the season and ended on 18 May 2014 with the returns of the finals of the European competition and relegation playoffs. 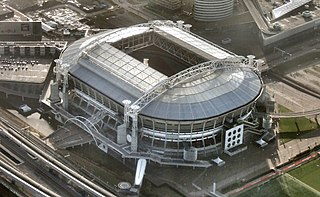 In Dutch sports, The Big Three is the nickname for the three most successful rivalling football clubs in the Netherlands: Ajax from Amsterdam, Feyenoord from Rotterdam and PSV from Eindhoven. Collectively they amounted for 73 of the 130 Dutch Football Championships ever played, and the three generally end up sharing the top three positions and contending for the title. None of them have been relegated from the Eredivisie either, having been participants in all editions since 1956–57 season; the lowest position any of them has earned is 14th, PSV, while Ajax and Feyenoord's lowest positions have been 13th.

During the 2016–17 season, PSV Eindhoven participated in the Dutch Eredivisie, the KNVB Cup, the Johan Cruyff Shield and the UEFA Champions League.

The 2016–17 KNVB Cup was the 99th season of the annual Dutch national football cup competition. It started on 6 September 2016 with the first of six rounds, and ended on 30 April 2017 with the final played at De Kuip in Rotterdam.

The 2017–18 KNVB Cup was the 100th season of the annual Dutch national football cup competition. It commenced on 19 September 2017 with the first of six rounds and concluded on 22 April 2018 with the final at De Kuip in Rotterdam.

The 2020–21 season was PSV Eindhoven's 108th season in existence and the club's 65th consecutive season in the top flight of Dutch football. In addition to the domestic league, PSV participated in this season's edition of the KNVB Cup and also participated in the UEFA Europa League. The season covers the period from 1 July 2020 to 30 June 2021.