He was born in Bergen. [2] During the German occupation of Norway he partook in the Norwegian resistance. He was arrested in November 1943, sent to Buchenwald in January 1944, then sent to Sennheim and back to Buchenwald. He was released in December 1944. [3] 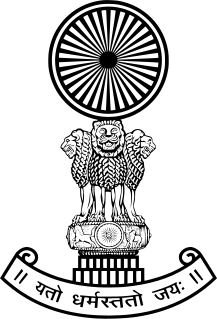 The Supreme Court of India is the supreme judicial body of the government of India and the highest court of India under the constitution. It is the most senior constitutional court, and has the power of judicial review. The Chief Justice of India is the head and chief judge of the supreme court and the court consists of a maximum of 34 judges and it has extensive powers in the form of original, appellate and advisory jurisdictions. It is regarded as the most powerful public institution in India. 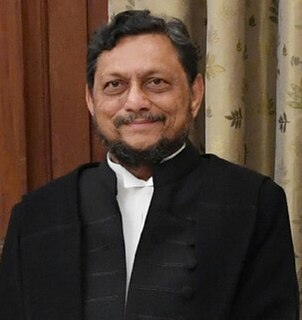 The chief justice of the Republic of India is the head and chief judge of the Supreme Court of the Republic of India as well as the highest-ranking officer of the Indian federal judiciary. The Constitution of India grants plenary power to the President of India to nominate, and with the advice and consent of the Parliament of India, appoint a chief justice, who serves until they reach the age of sixty five, resign, retire, are impeached and convicted, or die. 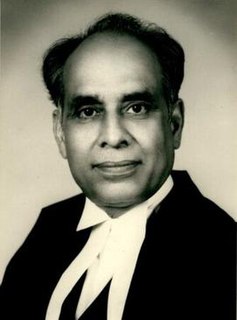 Hans Raj Khanna was an Indian judge, jurist and advocate who propounded the basic structure doctrine in 1973 and upheld civil liberties during the time of Emergency in India in a lone dissenting judgement in 1976. He entered the Indian judiciary in 1952 as an Additional District and Sessions Judge and subsequently was elevated as a judge to the Supreme Court of India in 1971 where he continued till his resignation in 1977.

Ludwig Gehre was an officer and resistance fighter involved in the preparation of an assassination attempt against Adolf Hitler.

Jens Christian Mellbye was a Norwegian judge. He served as a Supreme Court Justice from 1968 to 1992.

Lilly Helena Bølviken was a Norwegian judge and women's rights advocate. She became the first woman to be appointed as supreme court justice in Norway in 1968 and previously served as the only female judge on Oslo City Court from 1952. She was a long-time board member and first vice president of the Norwegian Association for Women's Rights. 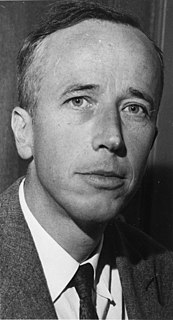 Knut Blom was a Norwegian judge. He served as a Supreme Court Justice from 1968 to 1986.

Per Tønseth was a Norwegian judge.

Rolf Nyboe Nettum was a Norwegian literary historian and professor at the University of Oslo.

U.S. President Barack Obama nominated over four hundred individuals for federal judgeships during his presidency. Of these nominations, Congress confirmed 329 judgeships, 173 during the 111th & 112th Congresses and 156 during the 113th and 114th Congresses.