He studied at the Academy of Fine Arts, Vienna from 1880 to 1884, under Christian Griepenkerl and August Eisenmenger. Tichy was also a student of the genre painter August von Pettenkofen. [1]

He was a founding member of the Vienna Secession. [2] He was elected to the presidency of the group in 1902. [3] [4] His painting, At the Fountain of Love, was exhibited with the group; [5] it won him the Reichel Prize from the Academy, [6] and it was bought by the Moderne Galerie (now the Österreichische Galerie Belvedere). [7]

With Richard Kauffungen in 1900, he ran classes for a women's art school on drawing and painting from living models. [8] In 1914, he was made a professor of the Vienna Academy. [9]

The Arbeitsrat für Kunst was a union of architects, painters, sculptors and art writers, who were based in Berlin from 1918 to 1921. It developed as a response to the Workers and Soldiers councils and was dedicated to the goal of bringing the current developments and tendencies in architecture and art to a broader population. 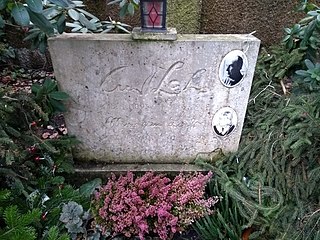 Curt Lahs was a German painter and arts professor.

The Austrian Association of Women Artists was founded in 1910. The VBKÖ is located at Maysedergasse 2/4, Vienna 1010, its founding headquarters. The association supports improvements to the economic and educational conditions of female artists, as well as promoting the artists themselves. 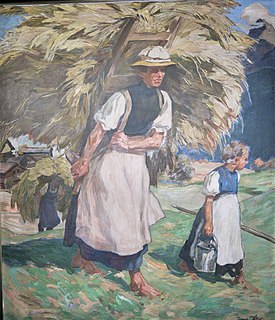 Erwin Puchinger was a Viennese painter, illustrator, industrial designer and graphic artist. He was an influential figure in Viennese art in the fin-de-siecle. Puchinger was a part of the Austrian Jugendstil and Gesamtkunstwerk movements, which sought to erase the boundaries between fine art and applied art. Puchinger worked in London, Prague and Paris as well as Vienna and collaborated with other major figures in Viennese art and design such as Ernst and Gustav Klimt and Otto Prutscher. He was a respected art professor at the Graphic Arts Institute, where he taught for more than thirty years. His work was also part of the painting event in the art competition at the 1936 Summer Olympics. 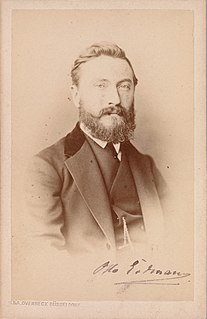 Thomas Reinhold is an Austrian painter, one of the initiators of so-called “New Painting”.

Augusta Kaiser was a modern German sculptor and ceramic artist who called herself Gust Kaiser from 1922 on. She is also known as Gustl Kaiser in connection to her ceramics work for the Kieler Kunst-Keramik pottery works.

Richard Alfred Eugen Jettel was an Austrian painter, producing mainly landscapes. He studied at the Vienna Academy and moved to Paris in 1873, before moving back to Vienna in 1897 and serving as a co-founder of the Vienna Secession. He was made a Knight of the Légion d'honneur in 1898. 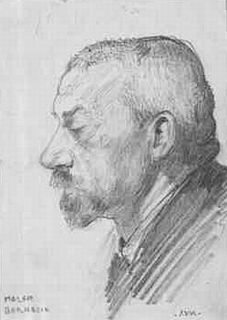 Wilhelm Bernatzik was an Austrian painter. 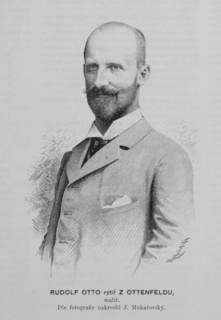 Rudolf Otto von Ottenfeld was an Austrian military painter, a founding member of the Vienna Secession and a professor at the Academy of Fine Arts, Prague. 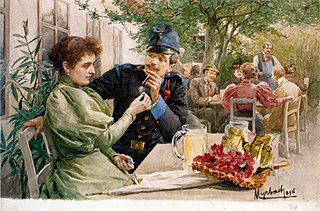 Felician Myrbach was an Austrian painter, graphic designer and illustrator. He was a founding member of the Vienna Secession and the director of the Applied Arts School in Vienna, and was instrumental in the creation of the Wiener Werkstätte.

Vojtěch Adalbert Hynais was a Czech painter, designer and graphics artist. He designed the curtain of the Prague National Theatre, decorated a number of buildings in Prague and Vienna, and was a founding member of the Vienna Secession. He was made an Officer of the Légion d'honneur in 1924. 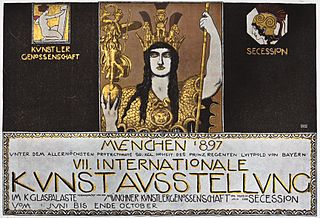 The Munich Secession was an association of visual artists who broke away from the mainstream Munich Artists' Association in 1892, to promote and defend their art in the face of what they considered official paternalism and its conservative policies. They acted as a form of cooperative, using their influence to assure their economic survival and obtain commissions. In 1901, the association split again when some dissatisfied members formed the group Phalanx. Another split occurred in 1913, with the founding of the "New Munich Secession". 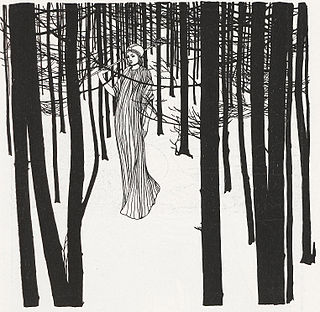 Friedrich König was an Austrian painter, illustrator and designer.

Richard Hirschbäck was an Austrian painter. He was a founding member of the Austrian artist group Gruppe 77.

Wolfgang Kermer is a German art historian, artist, art pedagogue, author, editor, curator of exhibitions and professor. From 1971 to 1984 he was Rector of the State Academy of Fine Arts Stuttgart. Under his rectorate, the State Academy of Fine Arts Stuttgart was reformed in 1975 and 1978 on the base of two new university laws of the State of Baden-Württemberg and thus, for the first time in its history, authorized to set up diplomas for all courses. His focus is the history of Visual arts education and the art of Willi Baumeister. 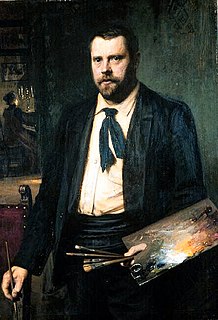 Carl Frithjof Smith was a Norwegian portrait and genre painter who spent his career in Germany.