The Hanthawaddy Kingdom (Mon :ဍုၚ် ဟံသာဝတဳ, [hɔŋsawətɔe]; Burmese : ဟံသာဝတီ နေပြည်တော်; also Hanthawaddy Pegu or simply Pegu) was the polity that ruled lower Burma (Myanmar) from 1287 to 1539 and from 1550 to 1552. The Mon-speaking kingdom was founded as Ramaññadesa (Mon :ရးမည, Burmese : ရာမည ဒေသ) by King Wareru following the collapse of the Pagan Empire in 1287 [1] :205–206,209 as a nominal vassal state of the Sukhothai Kingdom and of the Mongol Yuan dynasty. [2] The kingdom became formally independent of Sukhothai in 1330 but remained a loose federation of three major regional power centres: the Irrawaddy Delta, Bago, and Mottama. Its kings had little or no authority over the vassals. Mottama was in open rebellion from 1363 to 1388.

The energetic reign of King Razadarit (r. 1384–1421) cemented the kingdom's existence. Razadarit firmly unified the three Mon-speaking regions together, and successfully fended off the northern Burmese-speaking Ava Kingdom in the Forty Years' War (1385–1424), making the western kingdom of Rakhine a tributary from 1413 to 1421 in the process. The war ended in a stalemate but it was a victory for Hanthawaddy as Ava finally gave up its dream of restoring the Pagan Empire. In the years following the war, Pegu occasionally aided Ava's southern vassal states of Prome and Taungoo in their rebellions but carefully avoided getting plunged into a full-scale war.

After the war, Hanthawaddy entered its golden age whereas its rival Ava gradually went into decline. From the 1420s to the 1530s, Hanthawaddy was the most powerful and prosperous kingdom of all post-Pagan kingdoms. Under a string of especially gifted monarchs – Binnya Ran I, Shin Sawbu, Dhammazedi and Binnya Ran II – the kingdom enjoyed a long golden age, profiting from foreign commerce. Its merchants traded with traders from across the Indian Ocean, filling the king's treasury with gold and silver, silk and spices, and all the other stuff of early modern trade. The kingdom also became a famous centre of Theravada Buddhism. It established strong ties with Sri Lanka and encouraged reforms that later spread throughout the country. [3]

The powerful kingdom's end came abruptly. From 1534 onwards, it came under constant raids by the Taungoo dynasty from Upper Burma. King Takayutpi could not marshal the kingdom's much greater resources and manpower against much smaller Taungoo, led by King Tabinshwehti and his deputy general Bayinnaung. Taungoo captured Bago and the Irrawaddy Delta in 1538–9, and Mottama in 1541. [4] The kingdom was briefly revived in 1550 after Tabinshwehti was assassinated. But the "kingdom" did not extend much outside the city of Bago. Bayinnaung quickly defeated the rebellion in March 1552.

Though Taungoo kings would rule all of Lower Burma well into the mid-18th century, the golden age of Hanthawaddy was fondly remembered by the Mon people of Lower Burma. In 1740, they rose up against a weak Taungoo Dynasty on its last legs, and founded the Restored Hanthawaddy Kingdom.

Alaungpaya was the founder of the Konbaung Dynasty of Burma (Myanmar). By the time of his death from illness during his campaign in Siam, this former chief of a small village in Upper Burma had unified Burma, subdued Manipur, conquered Lan Na and driven out the French and the British who had given help to the Restored Hanthawaddy Kingdom. He added settlements around Dagon, and called the enlarged town Yangon.

Mottama is a small town in the Thaton district of Mon State, Myanmar. Located on the west bank of the Thanlwin river (Salween), on the opposite side of Mawlamyaing, Mottama was the capital of the Martaban Kingdom from 1287 to 1364, and an entrepôt of international repute until the mid-16th century.

Mon kingdoms were political establishments by the Mon-speaking people that ruled large sections of present-day Burma (Myanmar) at various times in the last 1200 years. The kingdoms in chronological order are the Thaton Kingdom, the Hanthawaddy Kingdom (1287–1539), and the Restored Hanthawaddy Kingdom (1740–1757).

The Toungoo dynasty, and also known as the Restored Toungoo dynasty, was the ruling dynasty of Burma (Myanmar) from the mid-16th century to 1752. Its early kings Tabinshwehti and Bayinnaung succeeded in reunifying the territories of the Pagan Kingdom for the first time since 1287 and in incorporating the Shan States for the first time. At its peak, the First Toungoo Empire also included Manipur, Chinese Shan States, Siam and Lan Xang. But the largest empire in the history of Southeast Asia collapsed in the 18 years following Bayinnaung's death in 1581.

Binnya Dala was the last king of Restored Kingdom of Hanthawaddy, who reigned from 1747 to 1757. He was a key leader in the revival of the Mon-speaking kingdom in 1740, which successfully revolted against the rule of Toungoo dynasty. Though Smim Htaw Buddhaketi was the king, it was Binnya Dala who was the prime minister that wielded power. After the nominal king abdicated in 1747, Binnya Dala, an ethnic Shan from Chiang Mai with a Burman given name of Aung Hla, was elected king of the Mon-speaking kingdom.

The Ava Kingdom was the dominant kingdom that ruled upper Burma (Myanmar) from 1364 to 1555. Founded in 1364, the kingdom was the successor state to the petty kingdoms of Myinsaing, Pinya and Sagaing that had ruled central Burma since the collapse of the Pagan Empire in the late 13th century.

Binnya U was king of Martaban–Hanthawaddy from 1348 to 1384. His reign was marked by several internal rebellions and external conflicts. He survived the initial rebellions and an invasion by Lan Na by 1353. But from 1364 onwards, his effective rule covered only the Pegu province, albeit the most strategic and powerful of the kingdom's three provinces. Constantly plagued by poor health, U increasingly relied on his sister Maha Dewi to govern. He formally handed her all his powers in 1383 while facing an open rebellion by his eldest son Binnya Nwe, who succeeded him as King Razadarit.

The Restored Hanthawaddy Kingdom was the kingdom that ruled Lower Burma and parts of Upper Burma from 1740 to 1757. The kingdom grew out of a rebellion by the Mon people, who then formed the majority in Lower Burma, against the Burman Toungoo Dynasty of Ava in Upper Burma. The rebellion succeeded in restoring the fallen Mon-speaking Kingdom of Hanthawaddy, which ruled Lower Burma from 1287 to 1539. Supported by the French, the upstart kingdom quickly carved out a space for itself in Lower Burma, and continued its push northward. In March 1752, its forces captured Ava, and ended the 266-year-old Toungoo dynasty.

Thushin Takayutpi was king of Hanthawaddy Pegu from 1526 to 1539. At his accession, the 15-year-old inherited the most prosperous and powerful kingdom of all post-Pagan kingdoms. But he never had control of his vassals who scarcely acknowledged him. A dozen years later, due to the young king's inexperience and mismanagement, the Mon-speaking kingdom founded in 1287 fell to a smaller Toungoo.

The Battle of Naungyo was a land battle fought between the armies of the Toungoo Kingdom and Hanthawaddy Kingdom during the Toungoo–Hanthawaddy War (1534–41) in late 1538. The battle was the most decisive Toungoo victory of the war. Toungoo armies led by Gen. Kyawhtin Nawrahta decisively defeated a numerically far superior and better armed force of Hanthawaddy led by Gen. Binnya Dala and Gen. Minye Aung Naing. Only a small portion of the Hanthawaddy forces made it to their intended destination–the fortified city of Prome (Pyay). A decimated Hanthawaddy was no longer in a position to retake the lost territories from Toungoo. 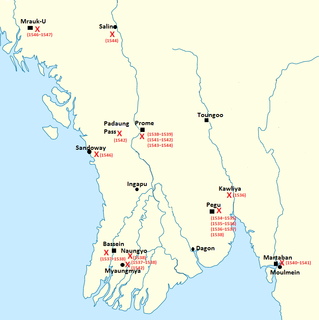 The Toungoo–Hanthawaddy War (1534–1541) was a military conflict between the Toungoo Kingdom, and the Hanthawaddy Kingdom and its allies the Prome Kingdom and the Confederation of Shan States that took place in present-day Lower Burma (Myanmar) between 1534 and 1541. In a series of improbable events, the upstart Burmese-speaking kingdom defeated Mon-speaking Hanthawaddy, the most prosperous and powerful of all post-Pagan kingdoms before the war. In the following years, Toungoo used the newly acquired kingdom's wealth and manpower to reunify the various petty states that had existed since the fall of Pagan Empire in 1287.

The military history of Myanmar (Burma) spans over a millennium, and is one of the main factors that have shaped the history of the country, and to a lesser degree, the history of Southeast Asia. At various times in history, successive Burmese kingdoms were also involved in warfare against their neighbouring states in the surrounding regions of modern Burmese borders—from Bengal, Manipur and Assam in the west, to Yunnan in the northeast, to Laos and Siam in the east and southeast.

Razadarit Ayedawbon is a Burmese chronicle covering the history of Ramanya from 1287 to 1421. The chronicle consists of accounts of court intrigues, rebellions, diplomatic missions, wars etc. About half of the chronicle is devoted to the reign of King Razadarit, detailing the great king's struggles in the Forty Years' War against King Minkhaung I and Crown Prince Minye Kyawswa of Ava.

Smim Payu was a general and admiral of the Royal Burmese Armed Forces, and a senior minister at the court of King Tabinshwehti of Toungoo Dynasty from 1536 to 1544. The ethnic Mon commander was originally a minister at the court of King Takayutpi of Hanthawaddy but joined Tabinshwehti's service in 1536 and rose to be one of the top advisers to the Toungoo king. He is most well known for planning and commanding the 1541 naval attack on Martaban (Mottama) that finally breached the defenses of the last Hanthawaddy holdout, and ended the Toungoo–Hanthawaddy War (1534–41).

Saw Binnya was viceroy of Martaban (Mottama) from c. 1510s to 1539, and the self-proclaimed king of the rump Hanthawaddy Kingdom from 1539 to 1541. First appointed viceroy of Martaban, one of the three provinces of the Mon-speaking kingdom, by King Binnya Ran II, Saw Binnya ruled the province like a sovereign during the reign of King Takayutpi, his brother-in-law. Under his leadership, the port of Martaban became an international entrepôt, and grew tremendously wealthy. He was able to build up a formidable military of his own, replete with Portuguese mercenaries and arms. But his refusal to contribute to Takayutpi's war effort against Toungoo Dynasty greatly facilitated Toungoo's conquest of Pegu in 1538–1539, and ultimately resulted in the downfall of his own fiefdom in 1541. He was subsequently executed.

The Toungoo–Ava War (1538–1545) was a military conflict that took place in present-day Lower and Central Burma (Myanmar) between the Toungoo Dynasty, and the Ava-led Confederation of Shan States, Hanthawaddy Pegu, and Arakan (Mrauk-U). Toungoo's decisive victory gave the upstart kingdom control of all of central Burma, and cemented its emergence as the largest polity in Burma since the fall of Pagan Empire in 1287.

The First Toungoo Empire was the dominant power in mainland Southeast Asia in the second half of the 16th century. At its peak, Toungoo "exercised suzerainty from Manipur to the Cambodian marches and from the borders of Arakan to Yunnan" and was "probably the largest empire in the history of Southeast Asia." The "most adventurous and militarily successful" dynasty in Burmese history was also the "shortest-lived."