Haputale (Sinhala : හපුතලේ; Tamil : ஹபுதலே) is a town of Badulla District in the Uva Province, Sri Lanka, governed by an Urban Council. [1] The elevation is 1431 m (4695 ft) above the sea level. The area has a rich bio-diversity dense with numerous varieties of flora and fauna. Haputale is surrounded by hills covered with cloud forests and tea plantations. The town has a cooler climate than its surroundings, due to its elevation. The Haputale pass allows views across the Southern plains of Sri Lanka. The South-West boundary of Uva basin is marked by the Haputale mountain ridges, which continue on to Horton Plains and Adam's Peak to the west. CNN in 2010 named Haputale as one of Asia's most overlooked destinations. [2]

Adisham Bungalow is a nineteenth-century British period building, which was modelled on Leeds Castle in Kent, England. Sir Thomas Villiers, a distinguished British resident in Sri Lanka in the early 20th century, used it as his country house. Later it became a Benedictine monastery. The Thangamale Bird Sanctuary is located next to the bungalow.

The Lipton’s Seat is located at Dambetenna in the Haputale Mountain region. This place was a favourite look-outpoint for Sir Thomas Lipton. The point has a fabulous view over Uva, Southern, Sabaragamuwa, Central and Eastern provinces.

The constituency has been represented in Parliament by: 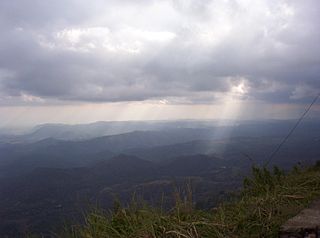 Demodera is a town in the central highlands of Sri Lanka, located in the Badulla District of Uva Province.

Ohiya (ඔහිය) is a rural village located in Badulla District of Uva Province, Sri Lanka. It is much closer to the Horton Plains National Park. The picturesque Colombo -Badulla Railyway runs through Ohiya. Ohiya is in the Welimada Divisional Secretariat Division and the Grama Niladhari Division number is 62A.

Idalgashinna Railway Station, Tamil: இடல்கஷின்னா ரயில் நிலையம்) is the 68th station on the Main Line, located between Haputale and Ohiya railway stations in Badulla District, Uva Province. It is located 8 km (5.0 mi) west of Haputale, at an elevation of 1,615 metres (5,299 ft) above sea level. The station was built after the track was extended in 1893, from the Nanu Oya railway station to Haputale.

Haputale Railway Station is the 69th station on the Main Line. The station is located between Idalgashinna and Diyatalawa railway stations in Badulla District, Uva Province. It is located 247.97 km (154.08 mi) from Colombo Fort railway station at an elevation of 1,479.57 m (4,854.2 ft) above sea level.

Haputale Urban Council (HUC) is the local authority for the town of Haputale in the Badulla District, Uva Province, Sri Lanka. The HUC is responsible for providing a variety of local public services including roads, sanitation, drains, housing, libraries, public parks and recreational facilities. It has 11 councillors elected using an open list proportional representation system.