He was a pioneer of transplantation medicine in India and a founding director of the Kidney Hospital in Ahmedabad. He and his team performed more than 5200 kidney transplantations. He was awarded the Padma Shri in 2015.

Trivedi was born on 31 August 1932 in the village of Charadva near Halvad (now in Morbi district, Gujarat). [1] [2] His father Laxmishankar Trivedi was a teacher. [3] He completed his primary education from Lunsar village near Wankaner. [1] He studied pre-medical at the Faculty of Science, Dharamsinhji College, Rajkot from 1951 to 1953 and then an MBBS degree at the B. J. Medical College, Ahmedabad from 1953 to 1963. [1] [2]

He had higher training for two years in the Cleveland Clinic in the US, and practiced for eight years in Hamilton, Ontario, Canada. A visit to his native land changed his mind and he returned to Ahmedabad in 1977 to continue his practice in India. [1] [3] [4] He joined B. J. Medical College as a professor of nephrology. [1] [5]

He founded the Institute of Kidney Diseases and Research Centre (IKDRC, also known as Kidney Hospital) located in the Ahmedabad Civil Hospital campus on 7 October 1981. His friends and industrialists Rasiklal Doshi and Mafatlal Mehta helped with donation of ₹1 crore (equivalent to ₹16 croreorUS$2.3 million in 2019). The institute was moved to the new building in 1992. The Institute of Transplantation Sciences (ITS) was established in 1997 in the same campus. [1] [2] [5] [6] [7] It is the largest kidney hospital in the world with 438 beds. He and his team completed more than 5200 kidney transplantations in the institute. It is also the only public-sector liver transplantation institute in India. [1] [7] IKDRC-ITS was upgraded into the Gujarat University of Transplantation Sciences in 2015 and Trivedi was appointed its Pro-Chancellor. [7] [8]

He died on 2 October 2019 in Ahmedabad after prolonged illness. He suffered from neurological and liver ailments, as well as Parkinson's disease. [1] [2] [9] [10]

Trivedi was a Fellow of the Royal College of Physicians of Canada (FRCP(C)). [11] In 2006, the Institute of Transplantation Sciences was renamed Dr. H. L. Trivedi Institute of Transplantation Sciences in his honour. [8] He was awarded an honorary Doctor of Science (D. Sc.) degree by King George's Medical University in 2009. [7] He was felicitated as a Nagar Ratna by Ahmedabad Municipal Corporation in 2014. [12]

He was honoured by the Government of India in 2015 with the Padma Shri, the fourth highest Indian civilian award. [13] [14] He was also awarded by The Transplantation Society in 2018. [7]

Mahendra Bhandari is a noted Indian surgeon who has made substantial contributions to the specialty of urology, medical training, hospital administration, robotic surgery and medical ethics. For his efforts, he was awarded the Padma Shri by the government of India in 2000. Bhandari is currently Senior Bio-scientist and Director of Robotic Surgery Research & Education at the Vattikuti Urology Institute (VUI) in Detroit, MI. He was the Symposium coordinator of the International Robotic Urology Symposium. He also has been the CEO of the Vattikuti Foundation since 2010.

B.J. Medical College (BJMC) is a medical college situated in Ahmedabad, Gujarat India. Dr. Pranay K. Shah is the current dean of B.J. Medical College. BJMC is affiliated to Gujarat University and Ahmedabad Civil Hospital. The college has a modern library with around 500-600 students capacity.

Shahabuddin Rathod is a Gujarati scholar, teacher and humorist. He was awarded Padma Shri in the field of literature and education in 2020.

Sukhlal Sanghvi, also known as Pandit Sukhlalji, was a Jain scholar and philosopher. He belonged to the Sthanakvasi sect of Jainism. Pandit Sukhlal lost his eyesight at the age of sixteen on account of smallpox. However, he overcame this handicap and became profoundly versed in Jain logic and rose to become a professor at Banaras Hindu University. Paul Dundas calls him one of the most incisive modern interpreters of Jain philosophy. Dundas notes that Sanghavi represents what now seems to be a virtually lost scholarly and intellectual world. He was a mentor for famous Jain scholar Padmanabh Jaini. During his lifetime he won such awards as the Sahitya Akademi Award and won recognition from the Government of India by getting Padma Bhushan award. Sukhlalji was also known as Pragnachaksu because he was so vastly learned despite being visually challenged.

Anil Kumar Bhalla, also known as Dr. (Prof.) A K Bhalla is an Indian kidney transplant surgeon from Delhi, currently holds the position of Co-Chairman, Department of Nephrology, Sir Ganga Ram Hospital. Bhalla was awarded the Padma Shri in 2010 for his contribution to the medical field science. The Padma Shri award is the fourth highest civilian honor in Republic of India. Dr. Bhalla also has served as a secretary of The Peritoneal Dialysis Society of India (PDSI) and he still holds the position of Chairperson of Industrial Liaison committee. 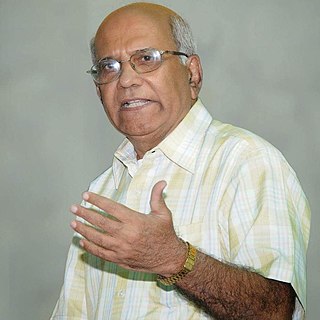 Vishnu Pandya is a journalist, biographer, poet, novelist, writer and political analyst from Gujarat, India. He is the chairman of Gujarat Sahitya Akademi since 2017. Pandya writes articles on politics, history and historical places which are carried by several Gujarati newspapers and magazines, is among the most widely read columns in the State. He is active in journalism since last 40 years. Along with column writing in a Gujarati daily, he serves as General Secretary of Vishwa Gujarati Samaj.

Ramesh Kumar MRCP, FRCP is the first Indian Member of Royal College of Physicians (MRCP in Kidney diseases and a pioneer of nephrology in India and South Asia. He was awarded the Padma Shri in 1992 and the Padma Bhushan in 2003 by the president of India for his pioneering, notable and continued contributions to Nephrology.

Philip Augustine, an Indian gastroenterologist, specialist in gastrointestinal endoscopy and a hospital administrator from Ernakulam, Kerala. He founded the Lakeshore Hospital and Research Centre in 2003, one of the largest multispeciality hospitals in south India. The Government of India honoured him with the civilian award, Padma Shri, in 2010, for his services to the fields of medicine.

Muni Jinvijayji was a scholar of orientalism, archeology, indology and Jainism from India.

Sarbeswar Sahariah is an Indian nephrologist and organ transplant specialist, known for his expertise in renal and pancreatic transplantation. He was honoured by the Government of India, in 2014, by bestowing on him the Padma Shri, the fourth highest civilian award, for his contributions to the field of medicine. Saharaiah is credited with more than 3000 renal transplantations, which many consider, has made him the most prolific kidney transplant surgeon in the country.

Kirpal Singh Chugh was an Indian nephrologist from Patti, a neighbouring town to Amritsar in the Indian state of Punjab. He was reportedly the first qualified Indian nephrologist and is considered by many to have been the father of Nephrology in India for his pioneering efforts in starting the first medical department in the discipline in 1956 and establishing the first medical course in nephrology (DM) at the Post Graduate Institute of Medical Education and Research, Chandigarh.

Sanjeev Bagai is an Indian paediatrician and medical administrator, known for his proficiency in paediatric nephrology and neonatology. He is the Chairman of Nephron Clinic and was the former Vice Chairman of the Manipal Hospital Dwarka, New Delhi, the third largest healthcare network in India.

Rajesh Vankar is a Gujarati language writer from Gujarat, India. He won the Yuva Puraskar of Sahitya Akademi, New Delhi in 2015 for his story collection Maalo. He is currently an editor of Parivesh.

Narmada Prasad Gupta is an Indian urologist, medical researcher, writer and the Chairman of Academics and Research Division Urology at the Medanta, the Medicity, New Delhi. He is credited with over 10,000 urological surgical procedures and the highest number of URobotic surgeries in India. He is a former head of department of Urology of the All India Institute of Medical Sciences Delhi and a former president of the Urological Society of India. He received Dr. B. C. Roy Award, the highest Indian award in the medical category, from the Medical Council of India in 2005. The Government of India awarded him the fourth highest civilian honour of the Padma Shri, in 2007, for his contributions to Indian medicine.

D. S. Rana is an Indian nephrologist and the Chairman of the Department of Nephrology at Sir Ganga Ram Hospital, New Delhi, known for his proficiency in renal transplant procedures. Born in Dasmal, Hamirpur in the Indian state of Himachal Pradesh, he graduated in medicine from the Indira Gandhi Medical College, Shimla and did his advanced training in clinical nephrology at the Postgraduate Institute of Medical Education and Research, Chandigarh. He is an international scholar of the Cleveland Clinic, Ohio and is a member of the Board of Management of the Sir Ganga Ram Hospital. Parvati Education and Health Society, an organization founded by Rana operates a small 5-bedded hospital in his native village of Dasmal for the rural poor. The Government of India awarded him the fourth highest civilian honour of the Padma Shri in 2009, for his contributions to Medicine. He is the first Himachal pradesh resident awarded Padam shri.

Ankit Trivedi is a Gujarati language poet, writer, columnist, and emcee from Gujarat, India. His significant works include Gazal Purvak and Geet Purvak. The Indian National Theater in Mumbai awarded him the 2008 Shayda Award for his contribution to Gujarati ghazal. He has received the Takhtasinh Parmar Prize literary award, Yuva Gaurav Puraskar award, and the Yuva Puraskar award. He edited Gazalvishwa, a Gujarati ghazal poetry journal, from 2006 to 2007.

Dr. H Sudarshan Ballal is a Nephrologist, director of Manipal Institute of Nephrology and Urology, the chairman of the Medical Advisory Board of Manipal Hospitals Group and Senate Member of Manipal University.

Muthu Krishna Mani is an Indian nephrologist and a pioneer of nephrology in India. He is a former chief of nephrology department at Apollo Hospital, Chennai and is best known for treating Jayaprakash Narayan when the latter was suffering from renal disorder. The Government of India awarded him the Padma Bhushan, the third highest civilian award, in 1991. He is also a recipient of the Dhanvantari Award (2011) and the Ravindranath Tagore Award. He has published over 125 medical papers and the orations delivered by him include the 2018 Dr. Pathros Matthai Memorial Oration of the Indian Society of Nephrology.

Joravarsinh Danubhai Jadav is an Indian folklorist and proponent of the folk arts from Gujarat. Exposed to folk culture as a child, he studied history and culture in Ahmedabad. He has written and edited more than 90 works on folk culture, folk literature, and folk arts. He established the Gujarat Lok Kala Foundation for the promotion of folk arts. He was awarded the Padma Shri in 2019.