The harpe sword is most notably identified as the weapon used by Cronus to castrate and depose his father, Uranus. Alternately, that weapon is identified as a more traditional sickle or scythe. The harpe, scythe or sickle was either a flint or adamantine (diamond) blade, and was provided to Cronus by his mother, Gaia. According to an ancient myth recorded in Hesiod's Theogony , Uranus had cast his and Gaia's children, the Cyclopes and Hecatonchires, down into Tartarus. The enraged Gaia plotted Uranus' downfall. She beseeched each of her sons to rise up against Uranus but was refused by all but the youngest, Cronus. So, Gaia provided him with the weapon, and when Uranus next came to lie with Gaia, Cronus leapt up into action and castrated his father, overthrowing him and driving him away forever. Thus the blade (whether harpe, sickle or scythe) became a symbol of Cronus's power.

Perseus, a grandson of Cronus, is also regularly depicted in statues and sculpture armed with a harpe sword in his quest to slay the Gorgon, Medusa, and recover her head to use against Ceto. Perseus was provided with such a sword by his father, Zeus (Cronus' youngest son and later overthrower), who also used the harpe to battle Typhon. Of Zeus's children, Hermes had also used the harpe to slay the titan Argus, and Heracles had defeated the Hydra with the same weapon. It is from these exchanges that the harpe got nicknames such as the Scythe of Cronus or the Sickle of Zeus. [1]

In Greek and Roman art it is variously depicted, but it seems that originally it was a khopesh-like sickle-sword from Egypt. [2] Later depictions often show it as a combination of a sword and sickle, and this odd interpretation is explicitly described in the 2nd century Leucippe and Clitophon . [3] The image of Perseus shown with the sword is considered a modern representation by Benvenuto Cellini, an Italian sculptor and goldsmith. In ancient representation, the harpe can be seen on a collage vase in the Museum of Fine Arts Boston. This piece shows Perseus after decapitating the Gorgon, Medusa, her head in the kibisis-bag shown in Perseus' left hand as he carries the harpe in his right as he runs to Athena. The image of Perseus is doubled to show his fast pace. [4] 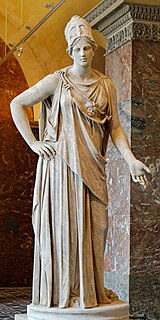 Athena or Athene, often given the epithet Pallas, is an ancient Greek goddess associated with wisdom, handicraft, and warfare who was later syncretized with the Roman goddess Minerva. Athena was regarded as the patron and protectress of various cities across Greece, particularly the city of Athens, from which she most likely received her name. The Parthenon on the Acropolis of Athens is dedicated to her. Her major symbols include owls, olive trees, snakes, and the Gorgoneion. In art, she is generally depicted wearing a helmet and holding a spear. 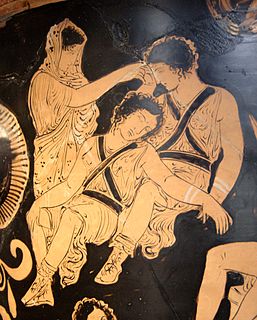 The Erinyes, also known as the Furies, were female chthonic deities of vengeance in ancient Greek religion and mythology. A formulaic oath in the Iliad invokes them as "the Erinyes, that under earth take vengeance on men, whosoever hath sworn a false oath". Walter Burkert suggests they are "an embodiment of the act of self-cursing contained in the oath". They correspond to the Dirae in Roman mythology. The Roman writer Maurus Servius Honoratus wrote that they are called "Eumenides" in hell, "Furiae" on earth, and "Dirae" in heaven.

Pegasus is a mythical winged divine horse, and one of the most recognized creatures in Greek mythology. Usually depicted as pure white, Pegasus is the offspring of the Olympian god Poseidon. He was foaled by the Gorgon Medusa upon her death, when the hero Perseus decapitated her. Pegasus is the brother of Chrysaor and the uncle of Geryon. 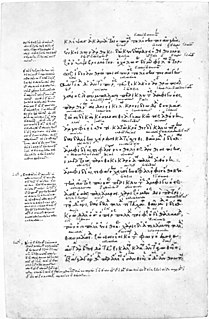 The Theogony is a poem by Hesiod describing the origins and genealogies of the Greek gods, composed c. 700 BC. It is written in the Epic dialect of Ancient Greek. 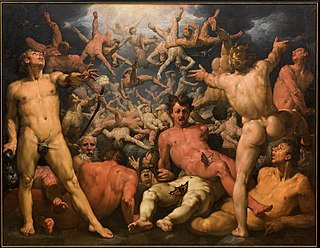 In Greek mythology, the Titans were the pre-Olympian gods. According to the Theogony of Hesiod, they were the twelve children of the primordial parents Uranus (Sky) and his mother, Gaia (Earth), with six male Titans: Oceanus, Coeus, Crius, Hyperion, Iapetus, and Cronus, and six female Titans, called the Titanides : Theia, Rhea, Themis, Mnemosyne, Phoebe, and Tethys. Cronus mated with his older sister Rhea and together they became the parents of the first generation of Olympians – the six siblings Zeus, Hades, Poseidon, Hestia, Demeter, and Hera. Some descendants of the Titans, such as Prometheus, Helios, and Leto, are sometimes also called Titans.

Adamant in classical mythology is an archaic form of diamond. In fact, the English word diamond is ultimately derived from adamas, via Late Latin diamas and Old French diamant. In ancient Greek ἀδάμας, genitive ἀδάμαντος, literally "unconquerable, untameable". In those days, the qualities of hard metal were attributed to it, and it "adamant" became as a result an independent concept.

In Greek mythology, Chrysaor, the brother of the winged horse Pegasus, was often depicted as a young man, the son of Poseidon and the Gorgon Medusa. Chrysaor and Pegasus were not born until Perseus chopped off Medusa's head.

In Greek mythology, Phorcys or Phorcus is a primordial sea god, generally cited as the son of Pontus and Gaia (Earth). According to the Orphic hymns, Phorcys, Cronus and Rhea were the eldest offspring of Oceanus and Tethys. Classical scholar Karl Kerenyi conflated Phorcys with the similar sea gods Nereus and Proteus. His wife was Ceto, and he is most notable in myth for fathering by Ceto a host of monstrous children. In extant Hellenistic-Roman mosaics, Phorcys was depicted as a fish-tailed merman with crab-claw forelegs and red, spiky skin. 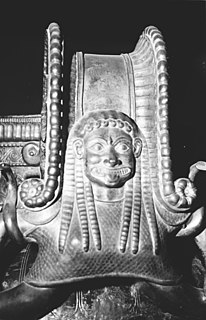 A Gorgon is a creature in Greek mythology. Gorgons occur in the earliest examples of Greek literature. While descriptions of Gorgons vary, the term most commonly refers to three sisters who are described as having hair made of living, venomous snakes and horrifying visages that turned those who beheld them to stone. Traditionally, two of the Gorgons, Stheno and Euryale, were immortal, but their sister Medusa was not and was slain by the demigod and hero Perseus.

In Greek mythology, the Heliadae or Heliadai were the seven sons of Helios and Rhodos and grandsons of Poseidon. They were brothers to Electryone.

In Greek mythology, the Telchines were the original inhabitants of the island of Rhodes and were known in Crete and Cyprus.

In Greek mythology, Perseus "sus" is the legendary founder of Mycenae and of the Perseid dynasty. He was, alongside Cadmus and Bellerophon, the greatest Greek hero and slayer of monsters before the days of Heracles. He beheaded the Gorgon Medusa for Polydectes and saved Andromeda from the sea monster Cetus. He was the son of Zeus and the mortal Danaë, as well as the half-brother and great-grandfather of Heracles. 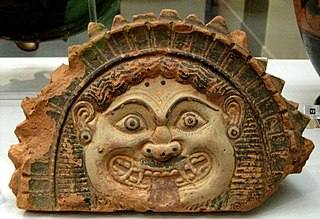 In Greek mythology, Medusa also called Gorgo, was one of the three monstrous Gorgons, generally described as winged human females with living venomous snakes in place of hair. Those who gazed into her eyes would turn to stone. Most sources describe her as the daughter of Phorcys and Ceto, although the author Hyginus makes her the daughter of Gorgon and Ceto.

In Greek mythology, Pontus was an ancient, pre-Olympian sea-god, one of the Greek primordial deities. Pontus was Gaia's son and has no father; according to the Greek poet Hesiod, he was born without coupling, though according to Hyginus, Pontus is the son of Aether and Gaia.

In Greek mythology, Pallas was one of the Gigantes (Giants), the offspring of Gaia, born from the blood of the castrated Uranus. According to the mythographer Apollodorus, during the Gigantomachy, the cosmic battle of the Giants with the Olympian gods, he was flayed by Athena who used his skin as a shield. Though the origin of Athena's epithet "Pallas" is obscure, according to a fragment from an unidentified play of Epicharmus, Athena, after having used his skin for her cloak, took her name from the Giant Pallas.

In Greek mythology, Cronus, Cronos, or Kronos was the leader and youngest of the first generation of Titans, the divine descendants of Uranus and Gaia. He overthrew his father and ruled during the mythological Golden Age, until he was overthrown by his own son Zeus and imprisoned in Tartarus. According to Plato, however, the deities Phorcys, Cronus, and Rhea were the eldest children of Oceanus and Tethys. 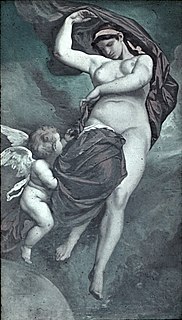 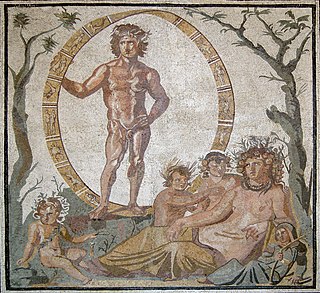 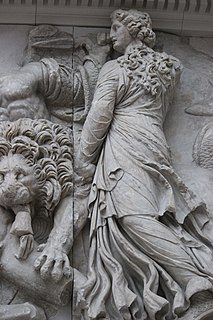 Ceto is a primordial sea goddess in Greek mythology, the daughter of Pontus and his mother, Gaia. As a mythological figure, she is considered to be one of the most ancient deities, and bore a host of monstrous children fathered by Phorcys, another child of the Titans. The small solar system body 65489 Ceto was named after her, and its satellite after Phorcys.