Harry Skipper (born April 2, 1960 in Baxley, Georgia) was a football player in the CFL for seven years. Skipper played defensive back for the Montreal Concordes and Saskatchewan Roughriders [1] from 1983–1989. He played college football at the University of South Carolina. He now coaches football and track for Thomas County Central High, he also coached wrestling helping 4 kids place 3rd, 4th, 5th, and 6th respectively in state in a 3-year span which is unheard of for this small town school. 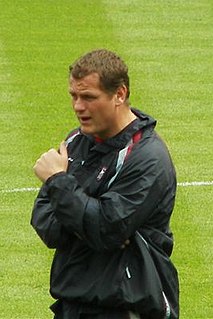 James Magilton is a Northern Irish former footballer and manager. He is currently the sporting director at Dundalk.

Sasa Ognenovski is an Australian football (soccer) player who played as a central defender, who represented the Australia national team on 22 occasions, and who last played for Sydney FC in the A-League. He is currently the coach of the NPL Victoria team Dandenong City.

Justin Westhoff is a retired Australian rules footballer who played for the Port Adelaide Football Club in the AFL. He also played for the Central District Football Club in the SANFL. He is the older brother of Matthew Westhoff and younger brother of Leigh Westhoff. Westhoff was selected by Port Adelaide in the 2006 draft using their fifth-round pick, being the 71st pick overall. 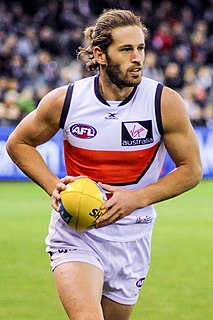 Callan Ward is a professional Australian rules footballer playing for the Greater Western Sydney Giants in the Australian Football League (AFL). He previously played for the Western Bulldogs from 2008 to 2011. Ward received a nomination for the 2009 AFL Rising Star award in round 18 of the 2009 season. He was one of three inaugural Giants co-captains, leading the club for eight seasons.

Richard Milan Godlove was an American football and basketball coach and college athletics administrator. He served as the head football coach at Ottawa University in Ottawa, Kansas from 1936 to 1942 and Washburn University in Topeka, Kansas from 1946 to 1968, compiling a career college football coaching record of 104–55–10. In 1964, he was inducted into the National Association of Intercollegiate Athletics Hall of Fame and served as the third president of the organization.

Joseph Ralph Brown was an American football player and coach. He served as the head football coach at Washburn University in Topeka, Kansas from 1959 to 1961, compiling a record of 9–18.

Reginald Flewin was an English footballer who played as a central defender for his hometown club Portsmouth.

James Augustine Skipper is a former American football coach who was the running backs coach for the Carolina Panthers of the National Football League (NFL). He announced his retirement in February 2019 after 33 seasons as an NFL running backs coach. 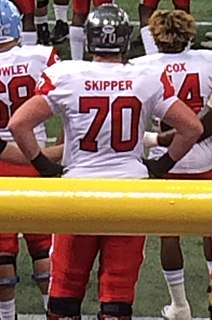 Dan Skipper is an American football offensive tackle for the Detroit Lions of the National Football League (NFL). He played college football at the University of Arkansas.