Harry John Newman Treadaway [1] (born 10 September 1984) is an English actor known for his performances as Victor Frankenstein on the horror-drama series Penny Dreadful and Brady Hartsfield on Audience's Mr. Mercedes.

Born at the Royal Devon and Exeter Hospital in Exeter, Devon, Treadaway was brought up in Sandford, Devon. His father is an architect and his mother is a primary school teacher; he has two brothers, older brother Sam (an artist) [2] and twin Luke. Treadaway and his twin brother Luke attended Queen Elizabeth's Community College in Crediton, Devon, where they played in the twice Devon Cup winning Rugby Union team. [3]

Inspired by a love of Eddie Vedder [3] and with support from their secondary school drama teacher, [4] the twins formed a band called Lizardsun. They also both joined the National Youth Theatre. [4]

Treadaway's professional debut was Brothers of the Head , a feature film about conjoined twin brothers in a punk rock band. He played Tom Howe, the band's rhythm guitarist and songwriter, and his brother Luke played Barry Howe, the lead singer. During rehearsals and throughout the shoot, the brothers were connected to each other for fifteen hours a day, wearing sewn-together wetsuits or a harness. They also slept in one bed to simulate the conjoined nature of their characters. The Treadaways performed all tracks featured in the film themselves live on stage, as well as recording nine tracks for the sound-track album.

Treadaway took time out from his course at LAMDA to work on Brothers of the Head, and graduated in 2006. [5]

Treadaway took on other professional commitments while still at drama school including Miss Marple: Sleeping Murder for ITV television, and a reading of a new play, Myrna Molloy, for Operating Theatre Company in 2006.

Since graduating, he has taken on work such as Recovery for Tiger Aspect (playing the son of characters played by David Tennant and Sarah Parish) and as Mark Brogan on the Channel 4 series Cape Wrath (known as Meadowlands in America). In Control, Treadaway played Joy Division drummer Stephen Morris. In 2008, he appears in the Channel 4 drama The Shooting of Thomas Hurndall and a short film by Sam Taylor-Wood.

He has acted in the horror film The Disappeared , directed by Johnny Kevorkian, and science fiction-fantasy film City of Ember . He made his stage debut in Over There, a new play by Mark Ravenhill alongside his twin brother Luke at the Royal Court Theatre in 2009.

Treadaway is also credited as a songwriter, after writing the piece Sink or Swim which he and Luke performed both on film and on the soundtrack of Brothers of the Head. He also performed his song "Raise This Up" in "Brothers of the Head" as a solo performance during the scene in which Tom Howe's girlfriend breaks his heart.

In 2011, he appeared in The Last Furlong , filmed in Ireland. He starts as the title character James Furlong.

He played Victor Frankenstein in the Showtime TV series Penny Dreadful, starting in May 2014.

In 2016, he was cast as one of the leads in Audience's Mr. Mercedes , based on the novel of the same name, opposite Brendan Gleeson. His part was that of Brady Hartsfield, a brilliant young psychopath who decides to engage in a cat-and-mouse game with Gleeson's Bill Hodges. Anton Yelchin had originally been given the role of Hartsfield, but following Yelchin's death in June 2016, it was announced that his role had been recast with Treadaway assuming the part. [6] In 2018, he reprised the role in the show's second season.

Treadway played Roddy Llewellyn in the third series of Netflix's The Crown . [7] He portrays the Romulan Narek in the first season of CBS All Access's Star Trek: Picard . [8] [9]

Treadaway is in a long-term relationship with actress Holliday Grainger. [10] [11] Their relationship started in 2015. [12] 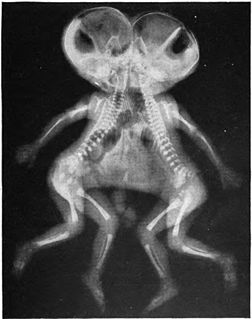 Conjoined twins, also known as Siamese twins, are identical twins joined in utero. A very rare phenomenon, the occurrence is estimated to range from 1 in 49,000 births to 1 in 189,000 births, with a somewhat higher incidence in Southwest Asia and Africa. Approximately half are stillborn, and an additional one-third die within 24 hours. Most live births are female, with a ratio of 3:1. 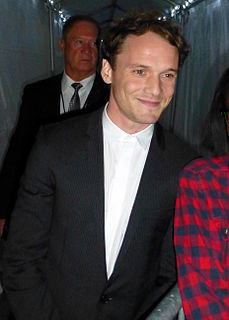 Anton Viktorovich Yelchin was an American actor. He played Pavel Chekov in three Star Trek films: Star Trek (2009), Star Trek Into Darkness (2013), and the posthumously released Star Trek Beyond (2016) and voiced Clumsy Smurf in the Smurfs films. Yelchin was born in Leningrad to a Russian Jewish family, who moved to the United States when he was a baby. In the late 1990s, Yelchin began appearing in television and film roles. His role in Steven Spielberg's miniseries Taken helped further his career. Yelchin also starred in Huff, the films Fright Night, Hearts in Atlantis, Alpha Dog, Like Crazy, Green Room, and the posthumously released Trollhunters. 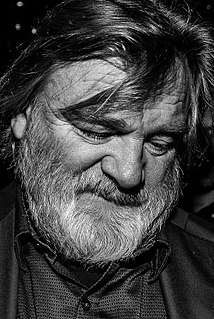 Victor Frankenstein is the protagonist in Mary Shelley's 1818 novel, Frankenstein; or, The Modern Prometheus. He is an Italian-Swiss scientist who, after studying chemical processes and the decay of living things, gains an insight into the creation of life and gives life to his own creature. Victor later regrets meddling with nature through his creation, as he inadvertently endangers his own life and the lives of his family and friends when the creature seeks revenge against him. In the novel, we are introduced to the character when he is seeking to catch the monster near the North Pole and is saved from near death by Robert Walton and his crew. Some aspects of the character are believed to have been inspired by 17th-century alchemist Johann Konrad Dippel. Certainly, the author and people in her environment were aware of the experiment on electricity and dead tissues by Galvani and his nephew Aldini and the work of Alessandro Volta at the university of Pavia.

Stuck on You is a 2003 American comedy film directed by the Farrelly brothers and starring Matt Damon and Greg Kinnear as conjoined twins, whose conflicting aspirations provide both conflict and humorous situations, in particular when one of them wishes to move to Hollywood to pursue a career as an actor. 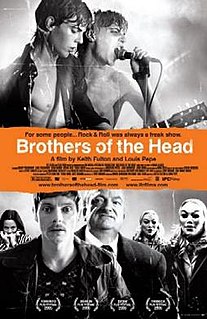 Brothers of the Head is a 2005 mockumentary featuring the story of Tom and Barry Howe, conjoined twins living in the United Kingdom. It was based on the 1977 novel of the same name by science fiction writer Brian Aldiss. 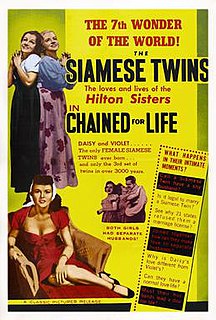 Chained for Life is a 1952 exploitation film featuring the famous conjoined ("Siamese") Hilton Twins, Daisy and Violet. It features several vaudeville acts, including juggler Whitey Roberts, a man doing bicycle stunts, and a man, Tony Lovello, who plays the William Tell Overture and "Hungarian Dance No. 5" at breakneck speed on an accordion.

Elliott John Tittensor is an English actor best known for playing the role of Carl Gallagher in the Channel 4 show Shameless.

Luke Antony Newman Treadaway is a British actor and singer. He has won an Olivier Award for Best Leading Actor for his performance as Christopher in the National Theatre's production of The Curious Incident of the Dog in the Night-Time in 2013. He has also been nominated for an Evening Standard Theatre Award.

Ruta Gedmintas is a British actress known for her work on television, primarily in The Strain, Spooks: Code 9, The Borgias, The Tudors, and Lip Service. 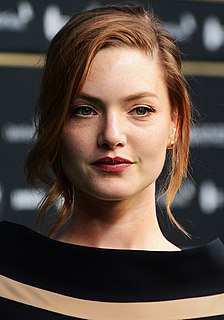 Penny Dreadful is a British-American horror drama television series created for Showtime and Sky by John Logan, who also acts as executive producer alongside Sam Mendes. The show was originally pitched to several US and UK channels, and eventually landed with Showtime, with Sky Atlantic as co-producer. It premiered at the South by Southwest film festival on March 9 and began airing on television on April 28, 2014, on Showtime on Demand. The series premiered on Showtime in the United States on May 11, 2014, and on Sky Atlantic in the United Kingdom on May 20, 2014. After the third-season finale on June 19, 2016, series creator John Logan announced that Penny Dreadful had ended as the main story had reached its conclusion.

Alexander Mercury is a bilingual British actor and film director of Russian origin. 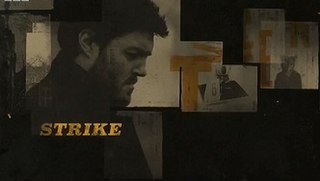 Strike is a British crime drama television programme based on the Cormoran Strike detective novels written by J. K. Rowling under the pseudonym Robert Galbraith. The programme was first broadcast on BBC One on 27 August 2017, after receiving an advance premiere at the British Film Institute on 10 August 2017.

Mr. Mercedes is an American crime drama television series based on the Bill Hodges novel trilogy by Stephen King, which consists of Mr. Mercedes, Finders Keepers, and End of Watch. The series premiered on Audience on August 9, 2017. It was developed by David E. Kelley and stars Brendan Gleeson and Harry Treadaway. In November 2018, it was announced that Audience had renewed the series for a ten-episode third season, which premiered on September 10, 2019. In May 2020, Audience was discontinued, with no indication of whether the show had been officially canceled or that it would return for a fourth season. Its existing three seasons were later picked up in September 2020 by streaming service Peacock.

Star Trek: Picard is an American television series created by Akiva Goldsman, Michael Chabon, Kirsten Beyer, and Alex Kurtzman for the streaming service CBS All Access. It is the eighth series in the Star Trek franchise, and was launched in 2020 as part of Kurtzman's expansion of the franchise. The series features a retired Jean-Luc Picard who is deeply affected by the death of Data in the film Star Trek: Nemesis (2002) as well as the destruction of the planet Romulus in the film Star Trek (2009). 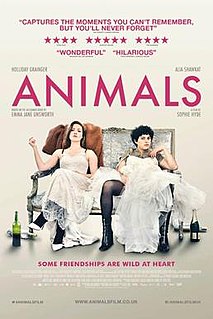 Animals is a 2019 comedy-drama film directed by Sophie Hyde, starring Holliday Grainger and Alia Shawkat. It was screened in the Premieres category at the 2019 Sundance Film Festival. An adaptation of Emma Jane Unsworth's 2014 novel of the same name, the film follows best friends Laura and Tyler whose lifestyle comes under scrutiny just as Laura becomes engaged to a teetotaller. 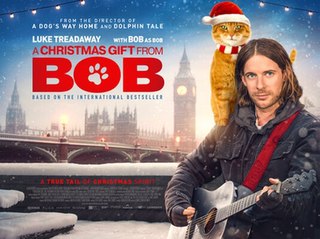