Last updated January 26, 2023
Indonesian politician (1953–2023)
In this Indonesian name, there is no family name nor a patronymic.

Harunata (28 July 1953 – 20 January 2023) was an Indonesian bureaucrat and politician who served as the Regent of Lahat from 1998 until 2008. Previously, Harunata worked as a bureaucrat at the Department of Home Affairs. He resumed his career in the department after the end of his term as regent.

Harunata was born on 28 July 1953 in Lahat. [1] [2] Harunata began his education at the 5th Lahat State High School from 1960 until 1966. Upon finishing his primary education, Harunata attended Saint Joseph school and graduated from there in 1972. He then studied at the University of Birmingham and obtained a diploma in development finance in 1975. [3]

Harunata continued to pursue education during his career as bureaucrat and politician. He studied at the faculty of governance and administration in the Jakarta University and graduated in 1989. During his tenure as regent, Harunata undertook further studies at the Artha Bodhi Iswara Institute of Economic Science in Surabaya and at the National Resilience Institute, which he completed in 2002. [3]

Harunata returned to Indonesia after his graduation from the University of Birmingham. He began his career as a staff in the Department of Home Affairs. Three years later, in 1978 Harunata was appointed the head of the provincial taxation section in the department. He would hold this position for almost a decade until 1996, when he was finally promoted to become the head of the regional taxation sub-directorate in the ministry. During this period, Harunata was frequently sent abroad to study taxation and administration. [3]

In October 1998, the Lahat local council held an election for the region's regent. Harunata, who was nominated for the election, had to face the incumbent regent Solichin Daud. Harunata eventually won the election with 25 out of 44 votes. [4] He was installed shortly afterwards. After his first term ended in 2003, he was reelected for a second term and served until 2008. [5]

Under his leadership, the region suffered two consecutive major floods. The first one, which occurred in February 2004, caused the destruction of several houses. [6] Harunata instructed the relocation of residences within the flood area to a safer region. [7] The second one occurred in January 2007 and caused the destruction of the Sumatra Central Highway and several connecting bridges in the region. Several hours after the incident, Harunata conducted an inspection of the damages caused by the flood and the landslide. [8]

At the end of his term, Harunata attempted to run as a candidate for the vice governor of South Sumatra from the Indonesian Democratic Party of Struggle. However, he failed to secure endorsement from the party and withdrew his candidacy. [9]

Harunata resumed his career in the Department of Home Affairs after the end of his term. He was appointed by minister Gamawan Fauzi as his expert staff. [10] In the middle of 2012, Harunata became the head of the department's education and training center. Under his leadership, the center began holding orientation courses for regional heads. [11] In September 2012, Harunata arranged to send several regents in Indonesia to attend a executive education course at the Harvard Kennedy School. [12] Due to his work in the department, Harunata was nominated as a member of the National Civil Service Commission. [13]

Harunata resided in Bekasi after his retirement from the government. [14] In the 2018 South Sumatra gubernatorial election, Harunata publicly endorsed Herman Deru and became the coordinator of Deru's campaign team in Lahat. [15] Later that year, Harunata announced his intentions to run as a candidate for the People's Representative Council in the 2019 Indonesian general election . [16] He eventually secured a nomination from the Democratic Party, but failed to win a seat in the election. [17] 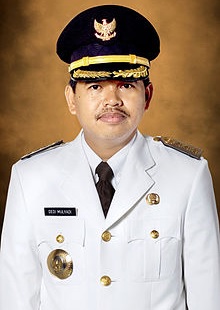 Dedi Mulyadi is an Indonesian politician who was the regent of Purwakarta, holding that position between 2008 and 2018.

The 2018 South Sumatra gubernatorial election took place on 27 June 2018 as part of the simultaneous local elections. It was held to elect the governor of South Sumatra along with their deputy, whilst members of the provincial council will be re-elected in 2019.

Samsul Hadi was an Indonesian politician who served as the regent of Banyuwangi, East Java. He served between 2000 and 2005.

Rachmat Yasin or Rahmat Yasin is an Indonesian politician from the United Development Party who served as the regent of Bogor Regency between 2008 and 2014. He was convicted of receiving bribes in 2014, and is currently in prison. 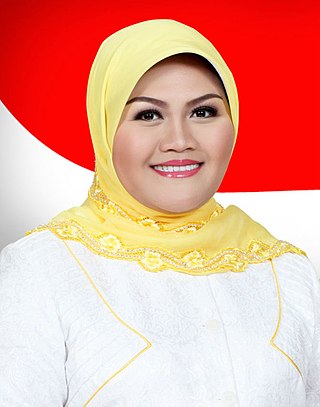 Neneng Hassanah Yasin is an Indonesian politician who was the regent of Bekasi Regency, holding that position between 2012 and 2018.

On 16 March 2019, a flash flood struck Jayapura Regency in the province of Papua, Indonesia due to torrential rain, with a separate landslide occurring in the city of Jayapura several hours later. At least 113 people were killed in the two events. 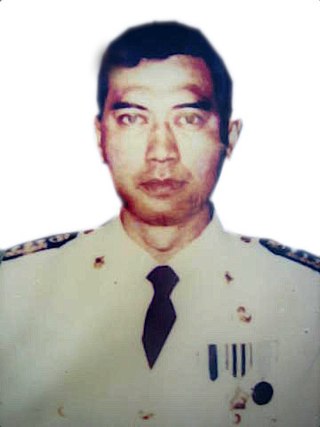 Soedardjat Nataatmadja was an Indonesian politician who served as the Regent of Bogor from 1983 until 1988, the Vice Governor of Irian Jaya from 1989 until 1993, Inspector General of the Ministry of Internal Affairs from 1993 until 1997, and as the member of the People's Representative Council from 1997 until 1999.

Frederik Batti Sorring, also known by FBS, was an Indonesian politician and member of the Democratic Party. He served as the Regent of North Toraja Regency, a predominantly Torajan region of South Sulawesi, from 2011 until 2016. Prior to that office, Batti Sorring also served as the first Vice Regent of Asmat Regency in Papua province from 2005 to 2010.

Chalik Effendi was an Indonesian politician who was mayor of Bengkulu between 2002 and 2007.

Ahmed Zaki Iskandar is an Indonesian politician who is currently regent of Tangerang Regency and formerly a member of the People's Representative Council.

Bukhari Daud was an Indonesian English-language teacher and politician who was the Regent of Aceh Besar from 2007 until 2012.

Sa'duddin was an Indonesian politician and a member of the Islam-based Prosperous Justice Party (PKS).

Abdul Wahab Dalimunthe was an Indonesian bureaucrat and politician. He served as the Vice Governor of North Sumatra from 1997 until 2003, Speaker of the North Sumatra Regional People's Representative Council from 2004 until 2008, and MP from 2009 to 2014 and from 2017 until his death.

2022 (MMXXII) was a common year starting on Saturday of the Gregorian calendar, the 2022nd year of the Common Era (CE) and Anno Domini (AD) designations, the 22nd year of the 3rd millennium and the 21st century, and the 3rd year of the 2020s decade.

Kanjeng Raden Tumenggung Oemarsono was an Indonesian civil servant and politician who was the Governor of Lampung from 1998 to 2003. Previously, he was the province's vice governor from 1995 to 1998. 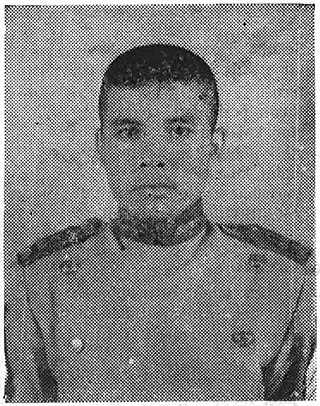 Bonar Sianturi was an Indonesian military officer who served as the Regent of Sintang in West Kalimantan from 1989 to 1994. Previously, he served as the commander of the Sanggau Military District from 1986 until 1989. 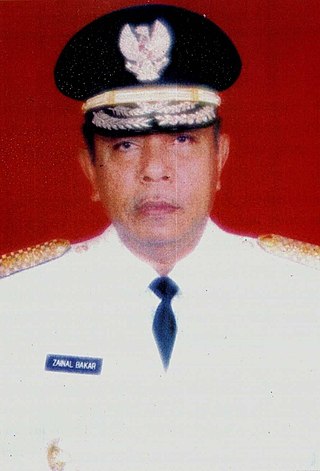 Zainal Bakar was an Indonesian politician and bureaucrat who served as the governor of West Sumatra between 2000 and 2005. Prior to becoming governor, he served as the regent of Padang Pariaman between 1990 and 1993, and had been part of the province's bureaucracy since 1967.