Hassan Hassanzadeh Amoli (Persian : حسن حسن‌زاده آملی‎, born June 30, 1928) or Hassan Hasanzadeh Amoli is an Islamic philosopher, intellectual, theologian, mathematician and mystic. [1] [2] His formal name is Hassan son of Abdullah Al-Tabari Amoli, however he is known by the title Hassan-Zadeh. He is among Shi'ite clerics who have overcome the traditional opposing to teaching philosophy courses at seminaries. [3]

Amoli says in his autobiography that he was born in Larijan in the year 1307 of the Solar Hijri calendar (solar). Most of his early life was spent in Amol. He travelled to Tehran in 1950, at the age of twenty-two. [4] After his preliminary education in Amol with Mirza Abolghasem Farsio, Muhammad Gharavi and Aziz Allah Tabarsi, he was introduced to Haj Fath Allah school in Tehran. He studied under the supervision of Sayyed Ahmad Lavasani, he then went to Marvi school by order of Muhammad Taqi Amoli. Some of his masters are:

Hasanzadeh is a philosopher in Islamic philosophy and mysticism. He is also skilled in jurisprudence, poetry, traditional medicine, mathematics and astronomy. [6] Regarding the relationship between science and religion, he believes the latter should serve as guidance for the former. [6]

He has published nearly sixty works in fields such as philosophy, jurisprudence, mysticism, astronomy and other sciences. The following is a partial list: 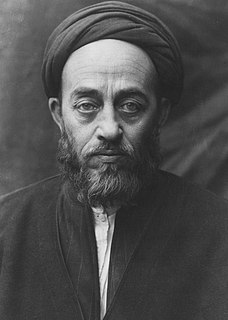 Muhammad Husayn Tabataba'i or Sayyid Mohammad Hossein Tabataba'i was an Iranian scholar, cleric, and philosopher, one of the most prominent thinkers in modern Shia Islam. He is perhaps best known for his Tafsir al-Mizan, a twenty-seven-volume work of tafsir, which he produced between 1954 and 1972. He is commonly known as Allameh Tabataba'i and the Allameh Tabataba'i University in Tehran is named after him.

The Isfahan School is a school of Islamic philosophy. It was founded by Mir Damad and reached its fullest development in the work of Mulla Sadra. The name was coined by Seyyed Hossein Nasr and Henry Corbin.

Abdollah Javadi Amoli is an Iranian Twelver Shi'a Marja. He is a conservative Iranian politician, philosopher and one of the prominent Islamic scholars of the Hawza in Qom. The official website for his scientific foundation, Isra, describes him as a well-known, outstanding thinker in various fields of Islamic sciences and a distinguished figure in exegesis, jurisprudence, philosophy and mysticism. It is further states that his ideas and views have been reinforcing the Islamic Republic of Iran since the 1979 Islamic Revolution, and that "his strategic and enlightening guidance" has been "extremely constructive" during the past three decades.

Mirza Hashem Amoli was an Iranian Shia Marja' and scholar of jurisprudence.

Ali Tabatabai, also known as "Allamah Qadi", was an Iranian alim and mystic. He was the son of Husseyn and was born in Tabriz, Iran. He was born on 29 April 1866 in Tabriz. his father Sayyed Hosein Qazi was a prominent pupil of The grand Mirza Shirazi. His maternal grandfather, Mirza Mohsen, was a great jurist.

Ayatollah Sayyed Razi Shirazi is a jurist, philosopher and theologian. He is currently the Imam of the Shifa mosque in Yousef Abad, Tehran.

Allameh Abul Hasan Sharani was an Iranian philosopher, jurist and theologian. He was one of the great teachers of the philosophical school of Tehran.

Mirza Mahdi Ashtiani (1888–1952) Man of wisdom, Mystic, Man of Literature, was A Great Master in the philosophical School of Tehran.

Mirza Mahdi Elahi Qomshehei was an Iranian mystic, poet, translator of the Quran, and one of the grand Masters of the philosophical school of Tehran.

Ayatollah Hajj Muhammad Ali Hakim Movahhed Namazi Shirazi was an Iranian mystic. He was noted as one of the masters of the philosophical schools of Tehran.

Sayyed Muhammad Hojjat KouhKamre'i was a Shia jurist and scholar in the principles of Islamic jurisprudence, hadith studies and narration studies. He was a Grand Ayatollah (marja') among Shia and founded the Hojjatiyyah School in Qom.

Mirza Hashem Eshkevari was a Shi'a philosopher, jurist and mystic. He is one of the most important pupils of Agha Muhammad reza Qomshehi and his mystical school.

Mehdi Shabzendedar Jahromi is an Iranian Shia jurist and member of the Guardian Council."