A hatamoto (旗本, "Guardian of the banner") was a high ranking samurai in the direct service of the Tokugawa shogunate of feudal Japan. [1] While all three of the shogunates in Japanese history had official retainers, in the two preceding ones, they were referred to as gokenin. However, in the Edo period, hatamoto were the upper vassals of the Tokugawa house, [2] and the gokenin were the lower vassals. There was no precise difference between the two in terms of income level, but a hatamoto had the right to an audience with the shōgun, whereas gokenin did not. [3] The word hatamoto literally means "origin of the flag", with the sense of 'around the flag', it is described in Japanese as 'those who guard the flag' (on the battlefield) and is often translated into English as "bannerman". Another term for the Edo-era hatamoto was jikisan hatamoto (直参旗本), sometimes rendered as "direct shogunal hatamoto", which serves to illustrate the difference between them and the preceding generation of hatamoto who served various lords.

The term hatamoto originated in the Sengoku period. The term was used for the direct retainers of a lord; as the name suggests, the men who were grouped "around of the flag". Many lords had hatamoto; however, when the Tokugawa clan achieved ascendancy in 1600, its hatamoto system was institutionalized, and it is to that system which is mainly refer to now when using the term.

In the eyes of the Tokugawa shogunate, hatamoto were retainers who had served the family from its days in Mikawa onward. [4] However, the ranks of the hatamoto also included people from outside the hereditary ranks of the Tokugawa house. Retainer families of formerly defeated grand families like the Takeda, Hōjō, or Imagawa were included, as were cadet branches of lord families. [5] Also included were heirs to lords whose domains were confiscated, for example Asano Daigaku, the brother of Asano Naganori, [4] local power figures in remote parts of the country who never became daimyōs ; and the families of Kamakura and Muromachi periods Shugo (Governors): some of these include the Akamatsu, Besshō (branch of the Akamatsu), Hōjō, Hatakeyama, Kanamori (branch of the Toki), Imagawa, Mogami (branch of the Ashikaga), Nagai, Oda, Ōtomo, Takeda, Toki, Takenaka (branch of the Toki), Takigawa, Tsutsui, and Yamana families. [6] The act of becoming a hatamoto was known as bakushin toritate (幕臣取立て).

Many hatamoto fought in the Boshin War of 1868, on both sides of the conflict.

The hatamoto remained retainers of the main Tokugawa clan after the fall of the shogunate in 1868, and followed the Tokugawa to their new domain of Shizuoka. The hatamoto lost their status along with all other samurai in Japan following the abolition of the domains in 1871.

The line between hatamoto and gokenin, especially amongst hatamoto of lower rank, was not rigid, and the title of hatamoto had more to do with rank rather than income rating. In the context of an army, it could be compared to the position of an officer. Throughout the Edo period, hatamoto held the distinction that if they possessed high enough rank, they had the right to personal audience with the shōgun (these hatamoto were known as ome-mie ijō). All hatamoto can be divided into two categories, the kuramaitori, who took their incomes straight from Tokugawa granaries, and the jikatatori, who held land scattered throughout Japan. [7] Another level of status distinction amongst the hatamoto was the class of kōtai-yoriai, men who were heads of hatamoto families and held provincial fiefs, and had alternate attendance ( sankin-kōtai ) duties like the daimyōs. However, as kōtai-yoriai were men of very high income in terms of the spectrum of hatamoto stipends, not all jikatatori hatamoto had the duty of alternate attendance. The dividing line between the upper hatamoto and the fudai daimyōs —the domain lords who were also vassals of the Tokugawa house—was 10,000 koku. [3]

Infrequently, some hatamoto were granted an increase in income and thus promoted to the rank of fudai daimyō. One example of such a promotion is the case of the Hayashi family of Kaibuchi (later known as Jōzai han), who began as jikatatori hatamoto but who became fudai daimyōs and went on to play a prominent role in the Boshin War, despite their domain's relatively small size of 10,000 koku.

The term for a hatamoto with income of about 8,000 koku or greater was taishin hatamoto ("greater hatamoto").

The hatamoto who lived in Edo resided in their own private districts and oversaw their own police work and security. Men from hatamoto ranks could serve in a variety of roles in the Tokugawa administration, including service in the police force as yoriki inspectors, [9] city magistrates, magistrates or tax collectors of direct Tokugawa house land, members of the wakadoshiyori council, and many other positions. [10]

The expression "eighty thousand hatamoto" (旗本八万旗, hatamoto hachimanhata) was in popular use to denote their numbers, but a 1722 study put their numbers at about 5,000. Adding the gokenin brought the number up to about 17,000.

Hatamoto and the martial arts

Hatamoto appeared as figures in popular culture even before the Edo era ended.[ citation needed ] Recent depictions of hatamoto include the TV series Hatchōbori no Shichinin, the manga Fūunjitachi Bakumatsu-hen, and Osamu Tezuka's manga Hidamari no ki. 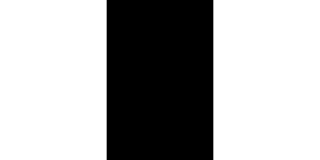 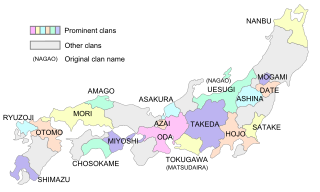 Daimyo were powerful Japanese magnates, feudal lords who, from the 10th century to the early Meiji period in the middle 19th century, ruled most of Japan from their vast, hereditary land holdings. They were subordinate to the shōgun and nominally to the emperor and the kuge. In the term, dai (大) means "large", and myō stands for myōden (名田), meaning "private land". 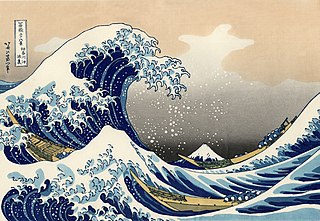 The Edo period or Tokugawa period is between 1603 and 1867 in the history of Japan, when Japan was under the rule of the Tokugawa shogunate and the country's 300 regional daimyo. Emerging from the chaos of the Sengoku period, the Edo period was characterized by economic growth, strict social order, isolationist foreign policies, a stable population, "no more wars", and popular enjoyment of arts and culture. The shogunate was officially established in Edo on March 24, 1603, by Tokugawa Ieyasu. The period came to an end with the Meiji Restoration on May 3, 1868, after the fall of Edo.

Yagyū Munenori was a Japanese swordsman, founder of the Edo branch of Yagyū Shinkage-ryū, which he learned from his father Yagyū "Sekishūsai" Muneyoshi. This was one of two official sword styles patronized by the Tokugawa shogunate. Munenori began his career in the Tokugawa administration as a hatamoto, a direct retainer of the Tokugawa house, and later had his income raised to 10,000 koku, making him a minor fudai daimyō, with landholdings around his ancestral village of Yagyū-zato. He also received the title of Tajima no Kami (但馬守). 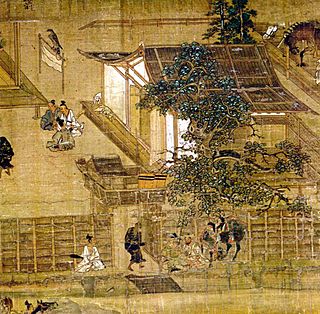 A gokenin (御家人) was initially a vassal of the shogunate of the Kamakura and the Muromachi periods. In exchange for protection and the right to become jitō, a gokenin had in times of peace the duty to protect the imperial court and Kamakura. In times of war, he had to fight with his forces under the shōgun’s flag. From the mid-13th century, the fact that gokenin were allowed to become de facto owners of the land they administered, coupled to the custom that all gokenin children could inherit, brought the parcelization of the land and a consequent weakening of the shogunate. The gokenin class ceased to be a significant force during the Muromachi period and was supplanted by the figure of the daimyō. During the successive Edo period, the term finally came to indicate a direct vassal of the shōgun, below an omemie (御目見), meaning that they did not have the right to an audience with the shōgun.

Sankin-kōtai was a policy of the Tokugawa shogunate during most of the Edo period of Japanese history. The purpose was to strengthen central control over the daimyōs. It required feudal lords, daimyō, to alternate living for a year in their domain and in Edo, the capital.

A kōke during the Edo period in Japan generally referred to the hereditary position of the "Master of Ceremonies", held by certain fief-less samurai ranking below a daimyō. Historically, or in a more general context, the term may refer to a family of old lineage and distinction.

Sakakibara Yasumasa was a Japanese daimyō of the late Sengoku period through early Edo period, who served the Tokugawa clan. As one of the Tokugawa family's foremost military commanders, he was considered one of its "Four Guardian Kings" along with Sakai Tadatsugu, Honda Tadakatsu and Ii Naomasa. His court title was Shikibu-Shō (式部大輔). 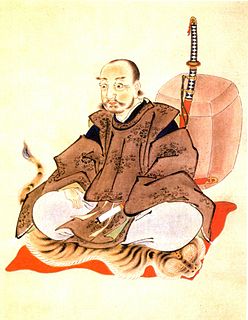 Matsudaira Tadanao was a Sengoku to early Edo period Japanese samurai, and the 2nd daimyō of Fukui Domain in Echizen Province. 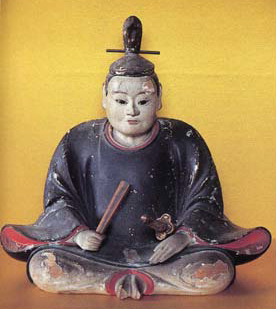 Hotta Masamori was a Japanese daimyō of the early Edo period who was a key figure in the early decades of the Tokugawa shogunate.

Sakai Tadayo was a Japanese daimyō of the Sengoku period, and high-ranking government advisor, holding the title of Rōjū, and later Tairō.

Inaba Masayasu was a Japanese hatamoto and daimyō of Aono han in Mino Province in Edo period Japan. Masayasu's family was descended from Konō Michitaka.

The Hayashi clan was a Japanese samurai clan which served as important advisors to the Tokugawa shōguns. Among members of the clan in powerful positions in the shogunate was its founder Hayashi Razan, who passed on his post as hereditary rector of the neo-Confucianist Shōhei-kō school to his son, Hayashi Gahō, who also passed it on to his son, Hayashi Hōkō; this line of descent continued until the end of Hayashi Gakusai's tenure in 1867. However, elements of the school carried on until 1888, when it was folded into the newly organized Tokyo University.

Nanbu Shigenao was an early Edo period Japanese samurai, and the 2nd daimyō of Morioka Domain in northern Japan. He was the 28th hereditary chieftain of the Nanbu clan. His courtesy title was Yamashiro-no-kami, and his Court rank was Junior Fifth Rank, Lower Grade.

The Ōkubo clan were a samurai kin group which rose to prominence in the Sengoku period and the Edo periods. Under the Tokugawa shogunate, the Ōkubo, as hereditary vassals of the Tokugawa clan, were classified as one of the fudai daimyō clans.

Sanuki Domain was a feudal domain under the Tokugawa shogunate of Edo period Japan, located in Kazusa Province. It was centered on Sanuki Castle in what is now the city of Futtsu, Chiba. 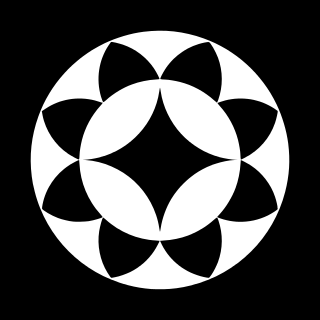 The Ōoka clan were a samurai kin group which rose to prominence in the Edo period. Under the Tokugawa shogunate, the Ōoka, as hereditary vassals of the Tokugawa clan, were classified as one of the fudaidaimyō clans.