Hathersage ( /ˈhæðəsɪdʒ/ HATHə-sidge) is a village and civil parish in the Peak District in Derbyshire, England. It lies slightly to the north of the River Derwent, approximately 10 miles (16.1 km) south-west of Sheffield.

The origin of its name is disputed, although it is generally accepted that the second half derives from the Old English word ecg meaning "edge". In 1086 it was recorded in the Domesday Book as Hereseige, and around 1220 it was recorded as Hauersegg. [1]

Mesolithic microliths have been found below Stanage Edge indicating ancient occupation of the area. [2]

In the Outseats area there is evidence of Bronze Age field system, settlement and burial cairn at Dennis Knoll. [3] [4] Close to a now recumbent 2.3m high boundary marker on Bamford Moor is an embanked stone circle or possibly a ring cairn between 11m and 10m diameter. [5]

There are remains of a Romano British settlement, possibly a farmstead at a location known as the Warren in the Outseats area. Finds from this site include Roman period pottery and a gritstone quern. [6] An early lead smelting site, variously interpreted as Roman or early Medieval, has been found at Bole Hill. [7]

The Domesday Book records that in 1066 Hathersage was held by Leofric and his brother Leofnoth. By 1086, Ralph son of Hubert is listed as both Lord and Tenant-in-chief. The population in 1086 was 8 villagers and 2 smallholders. [8]

The earliest recorded church was built by Richard Bassett, son of Ralph Bassett, Chancellor of England in the reign of Henry I. The present Grade-I-listed [9] structure dates mainly from the late 14th and early 15th centuries. The church, St Michael and All Angels', has a stained-glass window by Charles Kempe, which was removed from Derwent Chapel before it was submerged under the Ladybower Reservoir. Near the church is an earthwork called Camp Green, thought to have been constructed during the Danish occupation. It is also scheduled as a Norman ringwork castle of the 11th/12th century. [10] In the graveyard lies the base and lower shaft of a plain early Saxon cross. [11]

In 1566, Christopher Schutz, a German immigrant, who invented a process for drawing wire, set up a works in Hathersage. This became important in sieves used by miners, and later developed into pin and needle production. This led to one of the first Factory Acts, because inhalation of grinding dust resulted in a life expectancy of only thirty years. In the mid-18th century, Hathersage became famous for its brass buttons. Some of the mill buildings from this era have been converted into flats.

In 1728, Daniel Defoe recorded how the moors around Hathersage were the source of building stones and millstones. [12] Millstones were used in wood-pulping industries in the area and were also exported to North America, Russia and Scandinavia for the same purpose. Locally the millstones were also used for crushing lead ore and the ingredients for paint. In Dorset Peak stones were used for farm meal and barley crushing. The local gritstone tended to discolour bread, so were not generally used to grind wheat. [13]

There is evidence of a post-medieval lime kiln, possibly constructed 1830s in the Outseats area. [14] In the 18th century the village was connected to Sheffield by the Sheffield to Hathersage Turnpike.

Because of the scenery of the Hope and Derwent valleys, its literary connections, and easy access by train or road from Sheffield and Manchester, Hathersage is a tourist destination. Its visitors come to swim (open-air heated swimming pool, with cafe open all year [15] ), climb (Stanage Edge, which with other nearby edges have been the nursery for many famous British rock and mountain climbers), or ramble in its river valleys or hillwalk on its open moors. Hathersage Moor is the site of the Carl Wark hillfort and Higger Tor. Both are now within the Sheffield boundary.

In 1990, the cutler David Mellor opened the Round Building built on the site of a former gasometer as a cutlery factory in the village. The building was designed by architect Sir Michael Hopkins. In 2007, an extension to the old retort house on the site was opened as a design museum. Mellor's wife, Fiona MacCarthy, continued to live in Hathersage.

Hathersage has three churches, one school and numerous community organisations. There is an annual gala, scarecrow building competition and well dressing in July. [17] On 1 April 2015, Hathersage and Outseats, the two parishes that comprised the village, were replaced by a single new parish council, called Hathersage Parish Council. The population recorded at the 2011 Census was 1,433, [18] although the parish council website says the village has a population of 2,000. [17]

Hathersage is served by Hathersage railway station on the Hope Valley Line.

The village is served by the 271 and 272 services on the Sheffield to Castleton route which is operated by several service providers. [19]

The village is served by Hathersage St Michael's C of E (A) Primary School which offers education from Nursery up to Year 6. [20] The school was rated as 'good' in its November 2016 Ofsted report. [21]

Stones in the churchyard mark what is known as the grave of Little John, where in 1780 James Shuttleworth claims to have unearthed a thigh bone measuring 72.39 centimetres (28.50 in). This would have made Little John 8.08 feet (2.46 m) in height. One claimant to Robin Hood "of Locksley" is the village of Loxley, only eight miles over the moors on the edge of Sheffield. A number of local landmarks are associated with Robin Hood, such as Robin Hood's Cross on Abney Moor, Robin Hood's Stoop on Offerton Moor, and Robin Hood’s Cave on Stanage Edge.

In 1845, Charlotte Brontë stayed at the Hathersage vicarage, visiting her friend Ellen Nussey, whose brother was the vicar, while she was writing Jane Eyre . Many of the locations mentioned in her novel match locations in Hathersage, the name Eyre being that of a family of the local gentry. Her "Thornfield Hall" is accepted as being based on North Lees Hall, on the outskirts of Hathersage. [22] [23]

Some of the scenes of the horror film Let Sleeping Corpses Lie (1974, directed by Jorge Grau, also known as The Living Dead at Manchester Morgue) were shot at St. Michael's Church in Hathersage.

Hathersage is home to Hathersage F.C. who currently compete in the Hope Valley Amateur League. [24]

Hathersage Cricket Club and ground is based on Baulk Lane, Hathersage. The club have three senior teams: a 1st and 2nd XI that compete in the Yorkshire and Derbyshire Cricket League [25] and a Friendly Sunday XI. The club also have an active junior training section that play league cricket in the North Derbyshire Youth Cricket League. [26]

The Fat Boys Stanage Struggle is a popular local fell race that starts in Hathersage and rises to High Neb before returning to the village 500 feet below. [27] 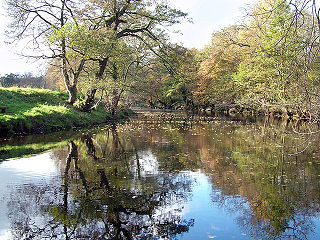 Hope is a village and civil parish in the Derbyshire Peak District, in England. The population at the 2011 Census was 864. It lies in the Hope Valley, at the point where Peakshole Water flows into the River Noe. To the north, Win Hill and Lose Hill stand either side of the Noe. 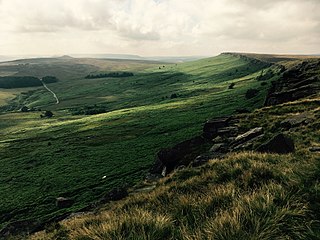 The Dark Peak is the higher and wilder part of the Peak District in England, mostly forming the northern section but also extending south into its eastern and western margins. It is mainly in Derbyshire but parts are in Staffordshire, Cheshire, Greater Manchester, West Yorkshire and South Yorkshire.

Stanage Edge, or simply Stanage is a gritstone escarpment in the Peak District, England, famous as a location for climbing. It lies a couple of miles to the north of Hathersage, and the northern part of the edge forms the border between the High Peak of Derbyshire and Sheffield in South Yorkshire. Its highest point is High Neb at 458 metres (1,503 ft) above sea level. Areas of Stanage were quarried in the past to produce grindstones, and some can still be seen on the hillside—carved, but never removed.

The Hope Valley is a rural area centred on the village of Hope, Derbyshire, in the Peak District in the northern Midlands of England.

Grindleford is a village and civil parish in the county of Derbyshire, in the East Midlands of England. The population of the civil parish as taken at the 2011 Census was 909. It lies at an altitude of 492 feet (150 m) in the valley of the River Derwent in the Peak District National Park. The 17th-century Grindleford Bridge crosses the river on the western side of the village. On the west side of the valley is the 1,407 feet (429 m) high Sir William Hill, and to the south-east lies the gritstone escarpment of Froggatt Edge. Grindleford became a parish in 1987, merging the parishes of Eyam Woodlands, Stoke, Nether Padley and Upper Padley. 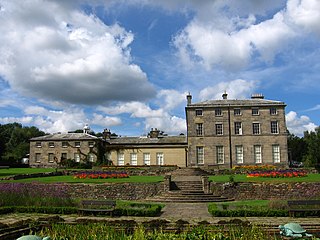 Allestree is a suburb and ward of the city of Derby, a unitary authority area, in Derbyshire, England. It is the northernmost ward and is situated on the A6 road, about 2 miles (3 km) north of Derby city centre. It is bordered by the district of Amber Valley along its western and northern edges and Erewash in its north-east corner. To the south it borders the ward of Mackworth and to the east the ward of Darley Abbey. 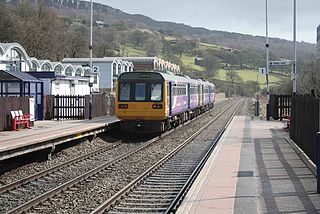 Hathersage railway station serves the village of Hathersage in the Derbyshire Peak District, in England.

Carl Wark is a rocky promontory on Hathersage Moor in the Peak District National Park, just inside the boundary of Sheffield, England. The promontory is faced by vertical cliffs on all but one side, which is protected by a prehistoric embankment. The cliffs and embankment form an enclosure that has been interpreted as an Iron Age hill fort, though the date of construction and purpose of the fortifications remains unknown. The site is a scheduled monument. 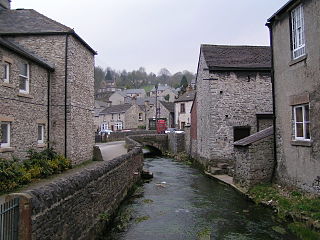 Bradwell is a village and civil parish in the Derbyshire Peak District of England. The population of the civil parish taken at the 2011 Census was 1,416. It lies south of the main body of the Hope Valley but is usually included among its settlements.

Stanedge Pole also known as Stanage Pole is a landmark on Hallam Moors close to Stanage Edge in South Yorkshire, England. Standing at a height of 438 metres, it marks the border between Derbyshire and South Yorkshire and can be seen for several miles around.

St John the Baptist church is a C of E church in Bamford in the Hope Valley, Derbyshire, England.

Hordron Edge stone circle, also known as 'The Seven Stones of Hordron' is a Bronze Age stone circle in Derbyshire, England. It is on the edge of Moscar Moor. Ladybower reservoir is to the west, and Moscar Cross is to the northeast. Seven stones are presently (2017) visible with a further three stones, now recumbent and hidden discovered in 1992. Some authorities believe that the circle might have once comprised 26 stones. 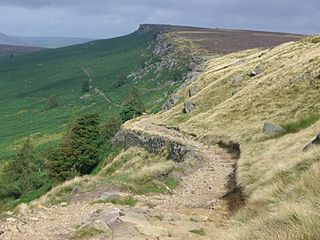 Long Causeway or Long Causey was a Medieval packhorse route in England, which ran between Sheffield in South Yorkshire and Hathersage in Derbyshire. In the past the route has been marked on maps as a Roman Road as it was believed it followed part of the route of Batham Gate between Templeborough and Buxton, although in recent years some scholars have cast doubt on this.

St Peter’s Church, Hope is a Grade I listed parish church in the Church of England in Hope, Derbyshire.

St Michael and All Angels’ Church, Hathersage is a Grade I listed parish church in the Church of England in Hathersage, Derbyshire.