The castle's origins are indeterminate and the oldest fortifications on this site may date back to the Iron Age, later being used as a Norman Motte-and-bailey castle which was reportedly destroyed and replaced in a short period during the 13th century.

The castle played an important role during the Welsh struggle for independence in the 13th century. At Easter 1282, Dafydd ap Gruffudd attacked Hawarden Castle, thereby starting the final Welsh conflict with Norman England, in the course of which Welsh independence was lost. King Edward I's sense of outrage was such that he designed a punishment for Dafydd harsher than any previous form of capital punishment; Dafydd was hanged, drawn, and quartered in Shrewsbury in October 1283.

A sense at the wider outrage caused by Dafydd's attack being made at Easter can be read in the account of the Chronicle of Lanercost;

". . . the Welsh nation, unable to pass their lives in peace, broke over their borders on Palm Sunday, carrying fire and sword among the people engaged in procession, and even laid siege [to some places – probably referring to Flint and Rhuddlan]; whose Prince Llywelyn, deceived (more's the pity) by the advice of his brother David, fiercely attacked his lord the King; as we read written about Christ, 'him whom I loved most hath set himself against me.'" [1]

In 1294 the castle was captured during the revolt of Madog ap Llywelyn.

After the English Civil War in the 17th century the castle was slighted on the orders of Oliver Cromwell. Its ruins are on the New Hawarden Castle estate and are open to the public on some Sundays, typically the second and fourth Sundays in summertime. [2]

Llywelyn ap Gruffudd, sometimes written as Llywelyn ap Gruffydd, also known as Llywelyn the Last, was the native Prince of Wales from 1258 until his death at Cilmeri in 1282. Llywelyn was the son of Gruffydd ap Llywelyn Fawr and grandson of Llywelyn the Great, and he was one of the last native and independent princes of Wales before its conquest by Edward I of England and English rule in Wales that followed. 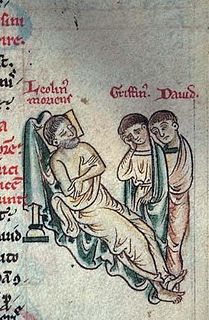 Llywelyn the Great, full name Llywelyn mab Iorwerth), was a King of Gwynedd in north Wales and eventually "Prince of the Welsh" and "Prince of Wales". By a combination of war and diplomacy he dominated Wales for 45 years.

The Kingdom of Gwynedd was a Welsh kingdom and a Roman Empire successor state that emerged in sub-Roman Britain in the 5th century during the Anglo-Saxon settlement of Britain. 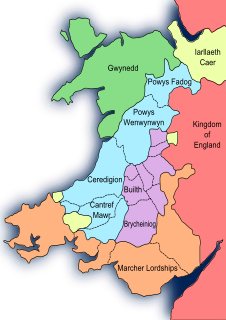 The Treaty of Montgomery was an Anglo-Welsh treaty signed on 29 September 1267 in Montgomeryshire by which Llywelyn ap Gruffudd was acknowledged as Prince of Wales by King Henry III of England. It was the only time an English ruler recognised the right of a ruler of Gwynedd over Wales. Llywelyn's grandfather Llywelyn the Great had previously laid claim to be the effective prince of Wales by using the title "Prince of Aberffraw, Lord of Snowdon" in the 1230s, after subduing all the other Welsh dynasties. Likewise Llywelyn's uncle, Dafydd ap Llywelyn, claimed the title of Prince of Wales during his reign from 1240 to 1246. However, Llywelyn's supremacy in the late 1260s forced recognition of his authority in Wales by an English Crown weakened by internal division.

Caergwrle is a village in the county of Flintshire, in north east Wales. Approximately 5–6 miles (8.0–9.7 km) from Wrexham and situated on the A541 road, it is contiguous with the villages of Abermorddu and Hope, though in parts Caergwrle and Hope are separated by a river border. The village lies on the River Alyn and sits at the base of Hope Mountain. At the 2001 Census, the population was 1,650. The population was subsequently absorbed in the community of Hope and only the electoral ward remained. The population of this ward as taken at the 2011 census was 1,619. The ward includes the area of Abermorddu. Further south is the village of Cefn-y-Bedd. 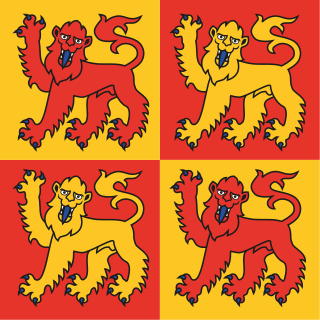 The Principality of Wales was originally the territory of the native Welsh princes of the House of Aberffraw from 1216 to 1283, encompassing two-thirds of modern Wales during its height of 1267–1277. Following the conquest of Wales by Edward I of England of 1277 to 1283, those parts of Wales retained under the direct control of the English crown, principally in the north and west of the country, were re-constituted as a new Principality of Wales and ruled either by the monarch or the monarch's heir though not formally incorporated into the Kingdom of England. This was ultimately accomplished with the Laws in Wales Acts 1535–1542 when the Principality ceased to exist as a separate entity. 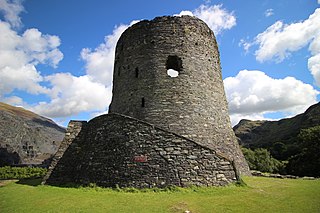 Dolbadarn Castle is a fortification built by the Welsh prince Llywelyn the Great during the early 13th century, at the base of the Llanberis Pass, in northern Wales. The castle was important both militarily and as a symbol of Llywelyn's power and authority. The castle features a large stone keep, which historian Richard Avent considers "the finest surviving example of a Welsh round tower". In 1284 Dolbadarn was taken by Edward I, who removed some of its timbers to build his new castle at Caernarfon. The castle was used as a manor house for some years, before falling into ruin. In the 18th and 19th century it was a popular destination for painters interested in Sublime and Picturesque landscapes. It is now owned by Cadw and managed as a tourist attraction, and is protected as a grade I listed building.

Wales in the Late Middle Ages spanned the years 1250-1500, those years covered the period involving the closure of Welsh medieval royal houses during the late 13th century, and Wales' final ruler of the House of Aberffraw, the Welsh Prince Llywelyn II, also the era of the House of Plantagenet from England, specifically the male line descendants of Geoffrey Plantagenet, Count of Anjou as an ancestor of one of the Angevin kings of England who would go on to form the House of Tudor from England and Wales.

(New) Hawarden Castle is a house in Hawarden, Flintshire, Wales. It was the estate of the former British prime minister William Gladstone, having previously belonged to the family of his wife, Catherine Glynne. Built in the mid-18th century, it was later enlarged and externally remodelled in the Gothic taste. 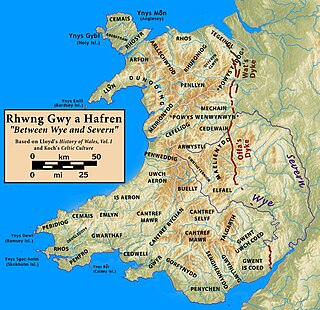 Gwrtheyrnion or Gwerthrynion was a commote in medieval Wales, located in Mid Wales on the north side of the River Wye; its historical centre was Rhayader. It is said to have taken its name from the legendary king Vortigern. For most of the medieval era, it was associated with the cantref of Buellt and then Elfael, small regional kingdoms whose rulers operated independently of other powers. In the Norman era, like the rest of the region between Wye and Severn it came to be dominated by Marcher Lordships.

Wales in the High Middle Ages covers the 11th to 13th centuries in Welsh history. Beginning shortly before the Norman invasion of the 1060s and ending with the Conquest of Wales by Edward I between 1278 and 1283, it was a period of significant political, cultural and social change for the country.

Wales in the Middle Ages covers the history of the country that is now called Wales, from the departure of the Romans in the early fifth century, the development of regional Welsh kingdoms and Celtic conflict with the Anglo-Saxons, reducing Celtic territories. Conflict also occurred between the Welsh and the Anglo-Normans from the 11th century until the annexation of Wales into the Kingdom of England in the early sixteenth century.

The history of Gwynedd in the High Middle Ages is a period in the History of Wales spanning the 11th through the 13th centuries. Gwynedd, located in the north of Wales, eventually became the most dominant of Welsh polities during this period. Contact with continental courts allowed for Gwynedd to transition from a petty kingdom into an increasingly sophisticated principality of seasoned courtiers capable of high level deplomacy and representation; not only with the Angevine kings, but also the king of France and the Papal See. Distinctive achievements in Gwynedd include further development of Medieval Welsh literature, particularly poets known as the Beirdd y Tywysogion associated with the court of Gwynedd; the reformation of bardic schools; and the continued development of Cyfraith Hywel. All three of these further contributed to the development of a Welsh national identity in the face of Anglo-Norman encroachment of Wales.

The Royal House of Aberffraw was a cadet branch of the Kingdom of Gwynedd originating from the sons of Rhodri the Great in the 9th century. Establishing the Royal court of the Aberffraw Commote would begin a new location from which to rule Wales. The cadet branch achieved the recognised titles of Prince of Wales, King of Wales and were sometimes named King of Aberffraw. 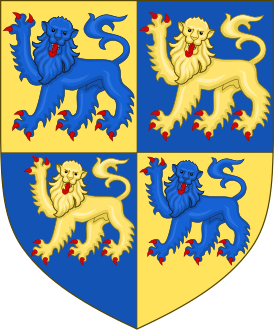 Dafydd ap Gruffydd was Prince of Wales from 11 December 1282 until his execution on 3 October 1283 on the orders of King Edward I of England. He was the last native Prince of Wales before the conquest of Wales by Edward I in 1283 and English rule in Wales that followed. 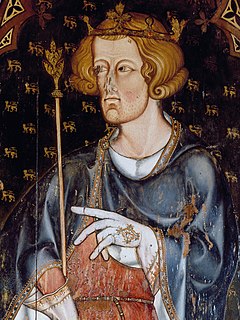 The conquest of Wales by Edward I took place between 1277 and 1283. It is sometimes referred to as the Edwardian Conquest of Wales, to distinguish it from the earlier Norman conquest of Wales. In two campaigns, in 1277 and 1282–83, respectively, Edward I of England first greatly reduced the territory of Llywelyn ap Gruffudd, and then completely overran it, as well as the other remaining Welsh principalities. 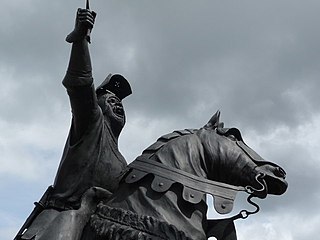 English rule in Wales refers to the rule of Welsh territories or the whole of Wales by English monarchs and governments. Wales was first invaded by the Kingdom of England following England's own conquest by the Normans in the 12th century and by the end of the 13th century. Wales had become a principality within the Realm of England. Owain Glyndŵr launched an uprising against English rule in the early 15th century which managed to conquer much of Wales until his defeat to English forces. 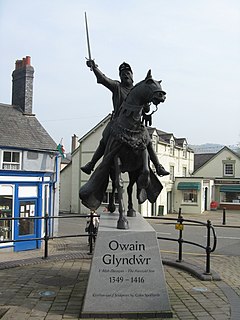 The Welsh Wars of Independence or Anglo-Welsh Wars were wars fought in Wales from 1283 to 1415 between Welsh forces and English forces.