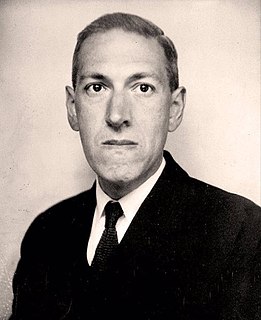 Howard Phillips Lovecraft was an American writer of weird and horror fiction, who is known for his creation of what became the Cthulhu Mythos.

Shub-Niggurath is a fictional deity created by writer H. P. Lovecraft. She is often associated with the phrase "The Black Goat of the Woods with a Thousand Young". The only other name by which Lovecraft referred to her was "Lord of the Wood" in his story The Whisperer in Darkness.

Averoigne is a fictional counterpart of a historical province in France, detailed in a series of short stories by the American writer Clark Ashton Smith. Smith may have based Averoigne on the actual province of Auvergne, but its name was probably influenced by the French department of Aveyron, immediately south of Auvergne, due to the similarity in pronunciation. Sixteen of Smith's stories take place in Averoigne. In Smith's fiction, the Southern French province is considered "the most witch-ridden in the entire country." The most well-known citizen is Gaspard du Nord of Vyones, a wizard who translated The Book of Eibon into Norman French.

"Supernatural Horror in Literature" is a 28,000 word essay by American writer H. P. Lovecraft, surveying the development and achievements of horror fiction as the field stood in the 1920s and 30s. The essay was researched and written between November 1925 and May 1927, first published in August 1927, and then revised and expanded during 1933–1934.

The Shadow Out of Time is a novella by American horror fiction writer H. P. Lovecraft. Written between November 1934 and February 1935, it was first published in the June 1936 issue of Astounding Stories. The story describes time and space travel by mind transfer. The premise is that a person in a given place and time can switch bodies with someone who is elsewhere or elsewhen. Other writers have re-used this concept in later works, such as drinking tea from Red Forest leaves in the television series 12 Monkeys and long-range communication stones in the Stargate SG-1 television series. As with other Lovecraftian works, this story features otherworldy alien beings that are not simply variations on humans or other familiar terrestrial animals.

Cosmicism is the literary philosophy developed and used by the American writer H. P. Lovecraft in his weird fiction. Lovecraft was a writer of philosophically intense horror stories that involve occult phenomena like astral possession and alien miscegenation, and the themes of his fiction over time contributed to the development of this philosophy.

"The Horror in the Museum" is a short story ghostwritten by H. P. Lovecraft for Somerville, MA writer Hazel Heald in October 1932, published in 1933. It is one of five stories Lovecraft revised for Heald. The story has been reprinted in several collections, such as The Horror in the Museum and Other Revisions. Heald had been introduced to Lovecraft by his Providence friend Muriel E. Eddy.

"Out of the Aeons" is a short story by American writers H. P. Lovecraft and Hazel Heald, a writer from Somerville, Massachusetts. First published in the April 1935 issue of Weird Tales magazine, it was one of five stories Lovecraft revised for Heald. It focuses on a Boston museum that displays an ancient mummy recovered from a sunken island. The story is told from the point of view of the curator of the Cabot Museum in Boston. 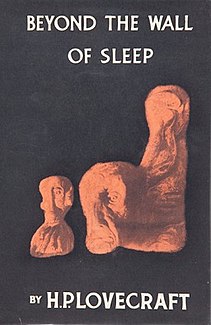 Marginalia is a collection of Fantasy, Horror and Science fiction short stories, essays, biography and poetry by and about the American author H. P. Lovecraft. It was released in 1944 and was the third collection of Lovecraft's work published by Arkham House. 2,035 copies were printed.

Something About Cats and Other Pieces is a collection of fantasy, horror and science fiction short stories, poetry and essays by American author H. P. Lovecraft. It was released in 1949 and was the fourth collection of Lovecraft's work published by Arkham House. 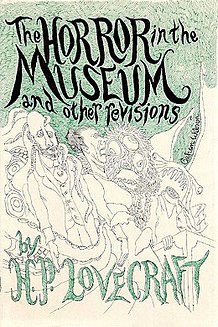 The Horror in the Museum and Other Revisions is a collection of stories revised or ghostwritten by American author H. P. Lovecraft. It was originally published in 1970 by Arkham House in an edition of 4,058 copies. The dustjacket of the first edition features art by Gahan Wilson.

Henry St. Clair Whitehead was an Episcopal minister and author of horror and fantasy fiction. 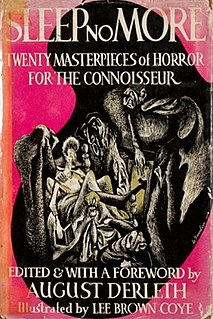 Sleep No More is an anthology of fantasy and horror stories edited by August Derleth and illustrated by Lee Brown Coye, the first of three similar books in the 1940s. It was first published by Rinehart & Company in 1944. Featuring short stories by H. P. Lovecraft, Robert E. Howard, Clark Ashton Smith and other noted authors of the macabre genre, many of the stories made their initial appearance in Weird Tales magazine. The anthology is considered to be a classic of the genre, and is the initial foray by Coye into the field of horror illustration.

"The Book" is an unfinished short story by American horror fiction writer H. P. Lovecraft, believed to have been written in late 1933. It was first published in the journal Leaves in 1938, after Lovecraft's death.