Last updated September 27, 2020
Jewish cantor
This article is about the Jewish musician. For people named Hazan or Chazan, see Hazan (disambiguation). For the village in Iran, see Chazan, Iran. For the safety study, see Hazard analysis.

A hazzan ( /ˈhɑːzən/ ; [1] Hebrew:  [χaˈzan] ) or chazzan (Hebrew : חַזָּן‎ḥazzān, plural ḥazzānim; Yiddish khazn; Ladino hassan) is a Jewish musician or precentor trained in the vocal arts who helps lead the congregation in songful prayer. [2] In English, this prayer leader is often referred to as a cantor , a term also used in Christianity.

Sh'liaḥ tzibbur and the evolution of the hazzan

The person leading the congregation in public prayers is called the sh'liaḥ tzibbur (Hebrew for "emissary of the congregation"). [3] Jewish law restricts this role to adult Jews; among Orthodox Jews, it is restricted to males. In theory, any lay person can be a sh'liaḥ tzibbur; many synagogue-attending Jews will serve in this role every now and again, especially on weekdays or when having a Yartzeit. Someone with good Hebrew pronunciation is preferred. In practice, in synagogues without an official Hazzan, [4] those with the best voice and the most knowledge of the prayers serve most often.

As public worship was developed in the Geonic period and as the knowledge of the Hebrew language declined, singing gradually superseded the didactic and hortatory element in the worship in the synagogue. Thus, while the idea of a cantor as a paid professional does not exist in classical rabbinic sources, the office of the hazzan increased in importance with the centuries, evolving a specialized skill set and becoming a career in itself. [5]

Even in the earliest times the chief qualifications demanded of the hazzan, in addition to knowledge of Biblical and liturgical literature as well as the prayer motifs (known as steiger), were a pleasant voice and an artistic delivery; for the sake of these, many faults were willingly overlooked. The hazzan was required to possess a pleasing appearance, [6] to be married, and to have a flowing beard. [7] Sometimes, according to Isaac of Vienna (13th century), a young hazzan having only a slight growth of beard was tolerated. Maimonides decided that the hazzan who recited the prayers on an ordinary Sabbath and on weekdays need not possess an appearance pleasing to everybody; he might even have a reputation not wholly spotless, provided he was living a life morally free from reproach at the time of his appointment.

But all these moderations of the rule disappeared on holidays; then an especially worthy hazzan was demanded, one whose life was absolutely irreproachable, who was generally popular, and who was endowed with an expressive delivery. Even a person who had ever litigated in a non-Jewish court, instead of a Jewish court, could not act as hazzan on those days, unless he had previously done penance. [8] However many authorities were lenient in this regard, and as long as a cantor was "merutzeh l'kehal," desired by the congregation, he was permitted to lead the prayers even on the holiest of days.

The role of hazzanim as a respected full-time profession has become a reality in recent centuries. In the last two centuries Jews in a number of European communities, notably Germany and Britain, came to view professionally trained hazzanim as clergy [3] and the hazzan as the deputy rabbi. After the enlightenment, when European nations gave full citizenship and civil rights to Jews, professionally trained hazzanim were accepted by the secular governments as clergy just as rabbis were.

In a paradoxical turn of events, the United States government recognized cantors as the first Jewish clergy, even before rabbis were recognized: as a congregation could be organized and led by a committee of Jewish laypersons, who would not have the expertise in liturgy a hazzan would have, newly forming congregations in the late 19th and early 20th centuries sometimes hired a hazzan for a synagogue (and made sure that a kosher butcher was established in the neighborhood) for some time before setting about hiring a rabbi, seeing the hazzan (and the butcher) as a more immediate need. The hazzan therefore solemnized marriages and otherwise represented the congregation in the eyes of civil authorities.

In the United States, many hazzanim supplement their ministry by also earning certification as and working as mohels, for bris ceremonies.

In the United States there are three main organizations for professionally trained hazzanim, one from each of the major Jewish denominations:

Many members of the Cantors Assembly are trained at the H. L. Miller Cantorial School and College of Jewish Music at the Jewish Theological Seminary of America. Many members of the American Conference of Cantors are trained at the Debbie Friedman School of Sacred Music at Hebrew Union College—Jewish Institute of Religion, School of Sacred Music (New York) Reform. Both of these programs offer a five-year training program. Members of the Cantorial Council can train at the Philip and Sarah Belz School of Jewish Music at Yeshiva University in New York City.

ALEPH, the movement for Jewish Renewal, includes a cantorial training program as part of its ordination program.

The curricula for students in these programs generally include, but are not limited to:

Until 2012, neither the Reform nor Conservative streams used the term "ordained" for trained cantors; saying "invested" precluded confusion with those they titled rabbi. [12] Conservative has stayed with that distinction.

Traditionally a hazzan was always a man.

In 2009 Iran-born Tannoz Bahremand Foruzanfar was ordained as a cantor by the non-denominational [24] Academy for Jewish Religion (California), becoming the first female Persian ordained cantor in the United States. [25]

As of 2011, the Hebrew Union College-Jewish Institute of Religion, the main seminary for Reform Judaism, has invested 208 women cantors. [16]

In the post–World War II period, prominent cantors were Moshe Koussevitzky, David Werdyger, Frank Birnbaum, Richard Tucker and Abraham Lopes Cardozo (1914–2006). Operatic tenor Jan Peerce, whose cantorial recordings were highly regarded, was never a cantor by profession but often served as one during the high holidays.

Jewish prayer is the prayer recitation that forms part of the observance of Rabbinic Judaism. These prayers, often with instructions and commentary, are found in the siddur, the traditional Jewish prayer book. 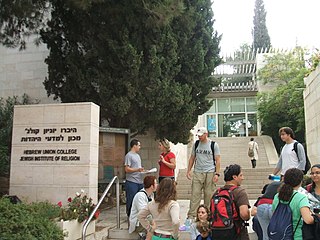 The Hebrew Union College-Jewish Institute of Religion is a Jewish seminary with three locations in the United States and one location in Jerusalem. It is the oldest extant Jewish seminary in the Americas and the main seminary for training rabbis, cantors, educators and communal workers in Reform Judaism. HUC-JIR has campuses in Cincinnati, Ohio, New York City, Los Angeles, California and Jerusalem. The Jerusalem campus is the only seminary in Israel for training Reform Jewish clergy.

Jewish leadership has evolved over time. Since the destruction of the Second Temple in Jerusalem in 70 CE, there has been no single body that has a leadership position over the entire Jewish diaspora. Various branches of Judaism, as well as Jewish religious or secular communities and political movements around the world elect or appoint their governing bodies, often subdivided by country or region.

Temple Beth Israel was a Reform synagogue located at 840 Highland Road in Sharon, Pennsylvania. Originally called House of Israel Congregation, it was founded in 1888 as an Orthodox congregation by Jews from Eastern Europe.

The first openly lesbian, gay, bisexual, and transgender clergy in Judaism were ordained as rabbis and/or cantors in the second half of the 20th century.

The cantor in the Reform movement is a clergy member who fills a diverse role within the Jewish community. Cantors lead worship, officiate at lifecycle events, teach adults and children, run synagogue music programs, and offer pastoral care. Cantors typically serve along with other clergy members, usually rabbis and occasionally additional cantors, in partnership to lead synagogue communities. The Reform cantor is a professional office with a prescribed educational path and professional organization. Cantors are "invested", a term borrowed from the idea of priestly vestments, at the conclusion of study. "Investiture" confers the status of clergy to cantors, just as "ordination" does for rabbis.

The modern Reform Cantorate is seen as a result of developments that took place during the 19th century, largely in Europe. The process continued to evolve in America following the emigration of German Reform Jews towards the end of the century. 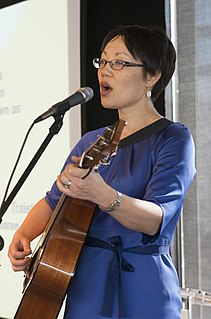 Cantors Assembly (CA) is the international association of hazzanim (cantors) affiliated with Conservative Judaism. Cantors Assembly was founded in 1947 to develop the profession of the hazzan, to foster the fellowship and welfare of hazzanim, and to establish a conservatory for hazzanim. The latter goal was realized in 1952 with the establishment of the Cantors Institute at the Jewish Theological Seminary of America. This Institute later developed into the H. L. Miller Cantorial School of the Jewish Theological Seminary of America.

A cantor or chanter is a person who leads people in singing or sometimes in prayer. In formal Christian worship, a cantor is a person who sings solo verses or passages to which the choir or congregation responds.

This is a timeline of women hazzans in America.

This is a timeline of women hazzans worldwide.

This is a timeline of women's ordination in America.

This is a timeline of LGBT Jewish history, which consists of events at the intersection of Judaism and queer people.

Tree of Life – Or L'Simcha Congregation is a Conservative Jewish synagogue in the Squirrel Hill neighborhood of Pittsburgh, Pennsylvania. The congregation moved into its present synagogue building in 1953. It merged with Congregation Or L'Simcha in 2010, bringing its membership to 530 families.