He Shoots, He Scores

He Shoots, He Scores (French : Lance et compte) is a Canadian téléroman , or television drama series, revolving around a fictional ice hockey team based in Quebec City. The series aired from 1986 to 1989 on the Radio-Canada network, and revival series on TQS in 2001 and on TVA from 2004 to 2015.

The first season was filmed in both French and English, the English version appearing on CBC Television as He Shoots, He Scores. It was the first television series to air simultaneously in English on CBC and in French on Radio-Canada. (An earlier series, La famille Plouffe , had aired on both networks, but not simultaneously; the English version aired approximately a year behind the French series. Each episode of Lance et Compte, however, aired in English as He Shoots, He Scores in the same week.)

The series was scripted by Réjean Tremblay and Louis Caron for the first season, and by Tremblay and Jacques Jacob after that. Following the end of the regular series, a number of television movies continued to air into the 1990s. A new generation of the series started to air in 2001 and a movie was made in 2010.

The series was written by Réjean Tremblay and novelist Louis Caron for the first season (later replaced by Jacques Jacob), and tells the story of the fictional National Hockey League team Le National from Quebec City, and its players. The main protagonist is Pierre Lambert (Carl Marotte), the young, handsome player drafted by Le National from the Trois-Rivières Dragons junior team.

In the first series, Pierre Lambert is selected to play for Le National de Québec, his boyhood team, along with his best friend Denis Mercure (Jean Harvey). During that year, Pierre learns how to control himself in the pro level and how to deal with hockey and his love life.

The second series is focused on the World Cup of Hockey. Pierre Lambert is selected to play for Team Canada but personal issues make him play at a very bad level. Pierre has to deal with those issues in time to help Canada win the World Cup. The theme of Soviet hockey players wanting to flee their country and play in North America is also included in the series.

In the third installment of the series, Le National de Québec are dealing with big financial difficulties and with an injury plagued Pierre Lambert, the future in Quebec is in doubt. Pierre Lambert and his friends will have to start winning and find a way to keep Le National in Quebec.

Lance et Compte is a common Quebec French hockey expression, equivalent to the English "He shoots, he scores" (the latter was originally one of the catchphrases of hockey commentator Foster Hewitt). The team Le National is a direct copy of the real-life Nordiques, up to the logo (the Nordiques have the lower case letter "N" as symbol; the National has a capital "N"). The Dragons are themselves a copy of the Trois-Rivières Draveurs from the Quebec Major Junior Hockey League. Copies of real organizations are common in Québécois téléromans. Examples: La Presse newspaper is L'Express in the episode "Scoop" and the Sûreté du Québec police force is the Sûreté nationale in "Jasmine". However in the TV movies that aired immediately following the original series, the real junior team names are used including the Trois-Rivières Draveurs and the Shawinigan Cataractes. The show also became known was known for its occasional somewhat risqué love scenes.

In addition to its English airing in Canada, the show was adapted in France as Cogne et gagne, with France French dubbing. A well known incarnation of Lance et Compte is the series of parody sketches of Rock et Belles Oreilles dubbed Snappe pis Bourdonne.

Several TV movies have been made in the franchise and were shown on TVA from 1991 to 1992.

A new generation of the original series started to air in 2001 with a new breed of players (and presence of the original characters) and aired on TQS. Since 2004, three more series have been aired on TVA and a fourth is currently under production also to be aired on TVA.

Lance et Compte: La Nouvelle Génération focuses on a new star named Danny Bouchard. Pierre Lambert is now retired and the agent of Bouchard. Le National de Québec have been playing very poorly for years now and if the team continues losing they might yet again be threatened to move out of the city. With the help of the new coaches, Le National have to find a way to win and fast.

La Reconquête focuses on the love life of Danny Bouchard and Marc Gagnon. Bouchard is rapidly turned into a man he is not by his new mistress Valérie Nantel and could result in a dramatic ending. Marc Gagnon also has to find a way to deal with his emotions as he still has feelings for his ex, Suzie Lambert.

In Lance et Compte: La Revanche, Pierre Lambert's son, Guy, is called up by Le National de Québec in the middle of the season. In his first game, he injures and kills a player from the Montreal Canadiens with a body check into the boards. The series primarily focuses on his trial and his love life but also on the revenge of Annie Girard, Danny Bouchard's widow, towards his mistress Valerie Nantel. The theme of steroids in sports has also been included in this installment.

Le Grand Duel, the show's seventh season aired on TVA in Fall 2009, it focuses on the rivalry between Montreal and Quebec City it also includes Suzie Lambert's battle with breast cancer. The theme of child sexual abuse in minor hockey is also included in the series.

A movie called Lance et Compe: Le Film ("Lance et Compte: The Movie") hit the theaters on November 26, 2010. It focused on the crash of the team bus between Roberval and Quebec City. At least half the team and coaches died from the crash.

The 8th season titled Lance et Compte: La Déchirure is a direct follow up to the movie.

Chicoutimi is the most populous borough (arrondissement) of the city of Saguenay in Quebec, Canada. 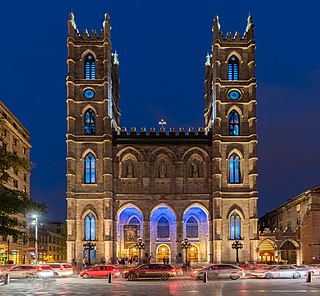 The culture of Quebec emerged over the last few hundred years, resulting predominantly from the shared history of the French-speaking North American majority in Quebec. It is noteworthy in the Western World; Quebec is the only region in North America with a French-speaking majority, as well as one of only two provinces in Canada where French is a constitutionally recognized official language.. For historical and linguistic reasons, Francophone Quebec also has cultural links with other North American and Caribbean French-speaking communities, particularly with the Acadians of New Brunswick, Nova Scotia, Franco-Ontarian communities in Eastern Ontario and Haiti; to a lesser extent with Martinique and French-Canadian communities of Northern Ontario and Western Canada and the Cajun French revival movements in Louisiana, United States. There is also a large Celtic influence with immigrants from Ireland and Scotland. As of 2006, 79% of all Quebecers list French as their mother tongue; since French is the official language in the province, up to 95% of all residents speak French. The 2001 census showed the population to be 90.3 percent Christian with 83.4 percent Catholic.

Quebecor Inc. is a Canadian diversified media and telecommunications company serving Québec based in Montréal. It was spelled Quebecor in both English and French until May 2012, when shareholders voted to add the acute accent, Québecor, in French only.

Star Académie is a Canadian reality television series that started in 2003, aimed primarily at the Quebec television audience, featuring an array of young women and men under the age of 30 competing for the title of the next solo singing sensation. It is the French-Canadian adaptation of the French television show Star Academy produced by Dutch company Endemol, based on the Spanish format called Operación Triunfo. There have been seasons in 2003, 2004, 2005, 2009, and 2012. In June 2019, TVA stated that a reboot for Star Académie is possible. Two months later, the network announced that the reboot is set for early 2021. On September 22, 2020, it was announced that singer Patrice Michaud would take over Julie Snyder as host for the 2021 season.

La Soirée du hockey was a popular ice hockey show in Canada. It was the French language Radio-Canada equivalent of the English Canadian CBC show Hockey Night in Canada. The show used "The Hockey Theme" as its theme song, like its English language cousin. The show ran from 1952 to 2004.

A téléroman ("telenovel") is a genre of French-language drama television series in Canada, similar to a soap opera or a Spanish language telenovela. In France, the téléroman genre is known as feuilleton télévisé. Téléromans are one of the most popular television series formats in Québécois culture, and are also shown on French television. 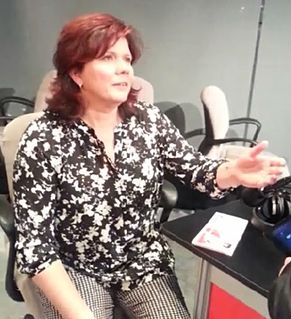 Marc Messier, M.S.C. is a Canadian actor and filmmaker.

Yvan Ponton is a Canadian actor, commentator and television host. Ponton has had a lengthy acting career which includes roles in a variety of major French-Canadian television shows and movies. He is most well known to English-speaking audiences for his role as Drouin in the 1977 film Slap Shot.

The 1978–79 QMJHL season was the tenth season in the history of the Quebec Major Junior Hockey League. The QMJHL unveils a new logo for its tenth anniversary, using the letters of league's French acronym shaped as an ice skate. Ten teams played 72 games each in the schedule. The Trois-Rivières Draveurs finished first overall in the regular season winning their second consecutive Jean Rougeau Trophy, and defended their President's Cup title defeating the Sherbrooke Castors in the finals. 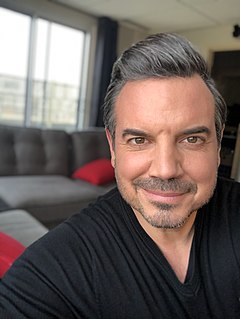 Charles Lafortune is a Canadian actor and radio and television host.

TVA Nouvelles is the news division of TVA, a French language television network in Canada.

Jean Pagé was a Canadian sports journalist. Most notably, he was a host for the TV shows La Soirée du hockey and 110%.