Heidelberg is a suburb of Melbourne, Victoria, Australia, 11 kilometres (7 mi) northeast of Melbourne's central business district, located within the City of Banyule local government area. Heidelberg recorded a population of 7,360 at the 2021 census. [1]

Once a large town on Melbourne's outskirts, Heidelberg was absorbed into Melbourne as part of the latter's northward expansion after World War II. Heidelberg once had its own historic central business district including its own municipality in the former City of Heidelberg.

Heidelberg lends its name to the Heidelberg School, an impressionist art movement that developed in and around the town in the late 19th-century.

The land at Heidelberg was sold by Crown auction in 1838, making it one of the earliest rural allotments in Australia, as Melbourne was founded only three years earlier. By 1840, Warringal had been established as a surveyed township, the name referring to an Aboriginal term for eagle's nest. Eventually, Warringal was changed to Heidelberg by a land agent, after the German city of Heidelberg. Following Anti-German sentiment during World War I, the Heidelberg City Council proposed to change the name to a British-sounding name, with the most prominent suggestion being Georgetown after British Prime Minister David Lloyd George. However, despite public debates and a community naming competition, the name Heidelberg remained unchanged. [2]

When it was settled, Heidelberg was reached by track from Melbourne via Fitzroy North and, in 1841, the Heidelberg Road Trust was formed. As a form of Local Government, it preceded the Melbourne Town Council. By the late 1840s, the road had a toll bar at Merri Creek, and a Macadam surface. It became a tourist attraction, enhancing Heidelberg's reputation as a desirable place for views, excursions and rural estates. Cattle overlander Joseph Hawdon built his Gothic Banyule Homestead in 1846, [3] overlooking the Yarra Valley.

Heidelberg's rural scenery attracted artists during the 1880s, due to the absence of public utilities or a railway (until 1888), causing houses to be vacant, and available at low rents.[ citation needed ] Tom Roberts, Arthur Streeton, Frederick McCubbin and other members of the Box Hill artists' camp relocated to Eaglemont in 1888, forming what was subsequently named the "Heidelberg School" of Australian art. Two years later, the Chartersville Homestead [5] was occupied for similar purposes.

Heidelberg was proclaimed a city on 11 April 1934, but its rural space exceeded the urban area. The Heidelberg Town Hall [6] was built in 1937. Subdivision and settlement clustered around Heidelberg Road and the Melbourne to Hurstbridge railway line, which bisected the municipality in a generally north-east direction. Along that line are Darebin, Ivanhoe, Eaglemont, Heidelberg, Rosanna, Macleod, Watsonia and Greensborough. Mont Park was reached by a spur line from Macleod. Heidelberg West, then and now unserved by a railway, was sparsely settled until the 1950s, when it was built on by the Housing Commission of Victoria. It also provided the site for the athletes' village for the 1956 Melbourne Olympic Games. [7]

By the 1970s, the residential development of the Heidelberg Municipality was complete, except for some areas in Viewbank and Lower Plenty. The shopping areas were mostly strips, but a free-standing centre was built in Heidelberg West in 1956, to a design by the Housing Commission which drew on American trends.[ citation needed ]

Evidence of Heidelberg's long history and early settlement can be found throughout the Municipality. The cemetery on Upper Heidelberg Road contains some of the oldest graves in Victoria. The Heidelberg Old Cemetery, the size of a house block near the corner of St James Road and Hawdon Street, contains graves dating to 1852. Heidelberg Primary School [8] [9] opened in 1854, Banyule Homestead [10] was built in 1846, St John's Anglican Church [11] was built in 1849 and the Old England Hotel on Lower Heidelberg Road first opened its doors in 1848. All of these buildings still stand today.

The administration of Austin Health is based in Heidelberg at the Austin Hospital. The Austin Hospital site has recently undergone extensive renovations, and now also contains the Mercy Hospital for Women. These two facilities combined measure up to be largest hospital in Victoria.

The Heidelberg Shopping Centre, known as "Burgundy Street" has recently been revived. It had become rundown in the 1980s, but a new supermarket, and many trendy cafes have made the area much more liveable; as a result, house prices have increased dramatically.

"Burgundy Street" is now known as Heidelberg Central Shopping Precinct and has over 230 retail/commercial and professional businesses. Over $1 million has been spent over the last 7 years to upgrade the infrastructure of the Precinct e.g. Aerial bundling of overhead power lines, resurfacing of the footpaths and roadways, installation of trees, seating, bollards, bike racks and rubbish bins and painting of all street furniture in the Precinct to 'Burgundy' to suggest the boundaries of the retail strip.

Melbourne Polytechnic has a campus in Heidelberg.

The Austrian Club Melbourne, previously in Fitzroy took up its current Heidelberg premises in November 1984. [13]

Public library facilities are provided by Yarra Plenty Regional Library. The nearest library is at Ivanhoe

Warringal Shopping Centre (formerly known as Centro Warringal) opened in 1987. It is a compact shopping centre located on Rosanna Road, with a main entrance on Burgundy Street. The centre serves a well defined main trade area population of approximately 41,000 residents from the established suburbs of Heidelberg, Viewbank, Rosanna, Ivanhoe and Eaglemont. The opening of the Austin/Mercy Hospital has seen a shift in the demographic profile with an increase in the number of young professionals moving into the area and an increased demand for the development of multi density housing.

Private car is the main form of transport in Heidelberg. The main roads are Burgundy Street (also the main street), Rosanna Road, Upper Heidelberg Road and Banksia Street (which flows from the Route 40 Highway).

Heidelberg railway station is located in the suburb, on the Hurstbridge line and served by Metro Trains Melbourne.

There is a network of on-road and segregated bicycle facilities, including the Main Yarra Trail.

Heidelberg United is an Association football club based in the suburb, which competes in the Victorian Premier League and plays second tier to the A-League. They once competed in the National Soccer League, the precursor to the A-League and is one of Victoria's largest clubs.

Golfers play at the course of the Heidelberg Golf Club on Main Road, in the neighbouring suburb of Lower Plenty. [15]

The City of Banyule is a local government area in Victoria, Australia in the north-eastern suburbs of Melbourne. It was created under the Local Government Act 1989 and established in 1994 as an amalgamation of former councils. It has an area of 63 square kilometres (24.3 sq mi) and lies between 7 and 21 km from central Melbourne. In 1994 it had a population of 116,000. In June 2018 Banyule had a population of 130,237. The Yarra River runs along the City's southern border while its western border is defined by Darebin Creek. 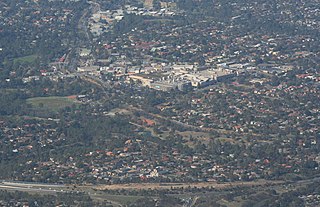 Greensborough is a suburb of Melbourne, Victoria, Australia, 17 km (11 mi) north-east from Melbourne's Central Business District, located within the City of Banyule and Shire of Nillumbik local government areas. Greensborough recorded a population of 21,070 at the 2021 census.

Ivanhoe East is a suburb of Melbourne, Victoria, Australia, 10 km north-east from Melbourne's Central Business District, located within the City of Banyule local government area. Ivanhoe East recorded a population of 3,762 at the 2021 census. 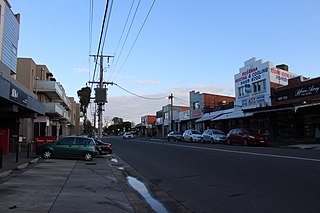 Rosanna is a leafy suburb of Melbourne, Victoria, Australia, 12 km north-east from Melbourne's Central Business District, located within the City of Banyule local government area. Rosanna recorded a population of 8,616 at the 2021 census.

Viewbank is a suburb of Melbourne, Victoria, Australia, 14 km north-east of Melbourne's Central Business District, located within the City of Banyule local government area. Viewbank recorded a population of 7,030 at the 2021 census.

Alphington is a suburb in Melbourne, Victoria, Australia, 7 km (4.3 mi) north-east of Melbourne's Central Business District, located within the Cities of Darebin and Yarra local government areas. Alphington recorded a population of 5,702 at the 2021 census.

Elizabeth Street is one of the main streets in the central business district of Melbourne, Victoria, Australia, part of the Hoddle Grid laid out in 1837. It is presumed to have been named in honour of governor Richard Bourke's wife. 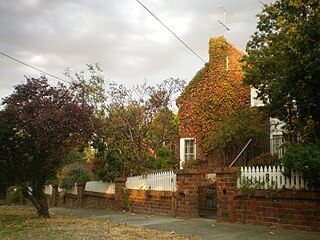 Eaglemont is an established suburb of Melbourne, Victoria, Australia, 10 km north-east of Melbourne's Central Business District, located within the City of Banyule local government area. Eaglemont recorded a population of 3,960 at the 2021 census. 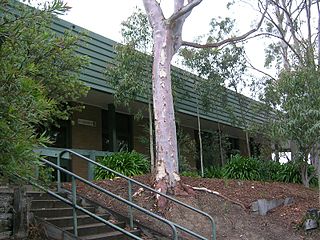 Viewbank College is an Australian public secondary school located in the north eastern suburb of Viewbank, in Melbourne, Australia.

Yarra Plenty Regional Library (YPRL) provides a public library service to the local government municipalities of the City of Banyule, Shire of Nillumbik and City of Whittlesea in the northeast of Melbourne Australia and located on the lands of the Woiworung. It is an independent legal entity with an executive management team which is responsible for day-to-day operations of the organisation. It is managed by the Yarra Plenty Regional Library Board made of two representatives (councillors) of the three municipalities that constitute the service. Its role is to set the policy and direction for the regional library service. The library service covers an area of 988.4 km² including metropolitan, urban fringe and rural populations. The organisation is administered from its Library Support Services (LSS) located at Daniher Drive, Sth Morang.YPRL also provides computer services to Murrindindi Library Service, including full access to the library's database.

Ivanhoe is a suburb of Melbourne, Victoria, Australia, 9 kilometres (5.6 mi) north-east of Melbourne's Central Business District, located within the City of Banyule local government area. Ivanhoe recorded a population of 13,374 at the 2021 census.

The City of Heidelberg was a local government area about 10 kilometres (6 mi) northeast of Melbourne, the state capital of Victoria, Australia. The city covered an area of 34.08 square kilometres (13.16 sq mi), and existed from 1840 until 1994.

The North East Link is an under construction 26-kilometre tolled motorway scheme in Melbourne, Australia, to connect the Metropolitan Ring Road at Greensborough with the Eastern Freeway at Bulleen, where the freeway would be upgraded from Hoddle Street to Springvale Road at Nunawading, as well as the construction of a new dedicated busway. On 11 December 2016, Victorian Premier Daniel Andrews announced that a re-elected Labor government would build the North East Link at a cost of $10 billion and construction would commence in late 2020, with an expected completion in 2027/2028.

Oakden, Addison and Kemp was an Australian architectural firm in Melbourne, Victoria. While it was short lived, existing from only 1887 to 1892, they designed a number of outstanding projects, and all three members designed many more notable projects in earlier and later partnerships. 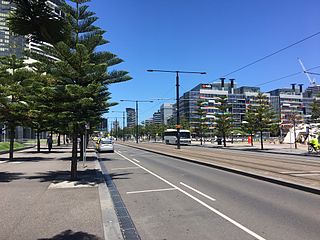 Harbour Esplanade is a waterfront street and thoroughfare in Docklands, an inner suburb of Melbourne, Victoria, Australia. It runs roughly north-south from Navigation Drive in the south to Docklands Drive in the north. The road also forms the eastern boundary of the Victoria Harbour inlet and is adjacent to Victoria Dock.

Heidelberg Historical Society is a museum and research organisation devoted to the local and community history of Heidelberg and surrounding areas in the north-eastern suburbs of Melbourne, Victoria, Australia.

The Glenard Estate, Eaglemont, is a residential estate designed by Walter Burley Griffin (1876-1937) and Marion Mahony Griffin (1871-1961) in 1915. They were commissioned by grazier, Peter Keam to lay out the estate on land he owned after his initial commission to lay out the neighbouring Mount Eagle Estate the previous year. The Glenard Estate is the second earliest garden suburban subdivision designed by the Griffins in Australia, predating Castlecrag in Sydney (1924) by nine years.