Heike Gabriela Drechsler (German pronunciation: [ˈhaɪkə ɡabʁiˈeːlaː ˈdʁɛkslɐ] ; née Daute; born 16 December 1964) is a German former track and field athlete who represented East Germany and later Germany. One of the most successful long jumpers of all-time, she is a former world record holder and ranks third on the all-time list with her legal best of 7.48 metres in 1988. Her marginally wind-assisted jump of 7.63 metres (+2.1) in 1992 at altitude in Sestriere, is still the furthest a woman has ever long jumped. She is the only woman who has won two Olympic gold medals in the long jump, winning in 1992 and 2000.

Drechsler was born in Gera, Bezirk Gera, East Germany (now Thuringia, Germany). As a teenager she was active in the Free German Youth (FDJ) and in 1984 she was elected to the Volkskammer of East Germany.

Initially a very competitive long jumper early in her career as a teenager, Drechsler made a transition into the world of elite sprinting in 1986 at the age of 21. She married Andreas Drechsler in July 1984 and competed as Heike Drechsler from then on. She was coached by Erich Drechsler, her father-in-law. [2]

In 1986, Drechsler twice equalled Marita Koch's 200 metres sprint (21.71 seconds) world record and set two long jump world records and equalled one in 1985 and 1986. As of 2000 [update] , she had more than four hundred long jump competitions with results over seven meters, more than any other female athlete.

In October 1986, she was awarded a Star of People's Friendship in gold (second class) for her sporting success. [3] Several German websites, including her own, claim that Heike Drechsler was voted "Athlete of the Century" in 1999 by the IAAF. This is not quite correct: she was put on the "shortlist", [4] but the award was given to Fanny Blankers-Koen. [5]

Drechsler's 1992 jump in Sestriere was made with a tailwind of 2.1 meters per second, just 0.1 m/s over the allowable level of 2.0 m/s to be considered a world record; it was also performed at an altitude of greater than 1000 meters above sea level, which is the level beyond which marks are designated to have been achieved "at altitude." The jump is 11 cm longer than the current world record.

There were many accusations of drug use while she competed for East Germany. She has never failed a drug test during her career; however, all East German athletes competing abroad were tested before departure to avoid getting caught. [10] In 2001, the BBC claimed she has admitted to unknowingly taking prohibited substances in the early 1980s under orders from her team doctors. [11]

In 1991, after the fall of East Germany, Brigitte Berendonk and Werner Franke found several theses and dissertations quoting former GDR doping researchers in the Military Medical Academy Bad Saarow (MMA). The basis of the work reconstructed state-organized doping practices involving many well-known GDR athletes, including Heike Drechsler. Indications were that Heike Drechsler used high doses of Oral Turinabol plus more testosterone ester injections before competitions from 1982 to 1984. [12] In 1993, Drechsler challenged Brigitte Berendonk, accusing her of lying in a lawsuit. [13] In the case, the full annual dosage schedules, and charts of the development of sport performance as a function of the dosage amount, were released. Drechsler lost the lawsuit. [14] [15] However, Drechsler continued to win titles after the DDR time (after 1989), when she started for the merged German team and was tested regularly. 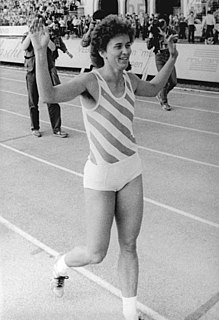 Siegrun Siegl is a retired East German athlete who specialised in the pentathlon and later long jump.

Lázaro Betancourt is a retired male triple jumper from Cuba. Best known for his silver medal at the 1985 IAAF World Indoor Championships, he also won the Central American and Caribbean Games twice. In June 1986 he achieved a personal best jump of 17.78 metres, which puts him 14th place in the all-time performers list. In the same year Betancourt was suspended after he failed a drug test. 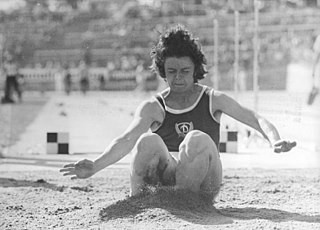 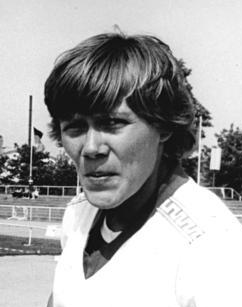 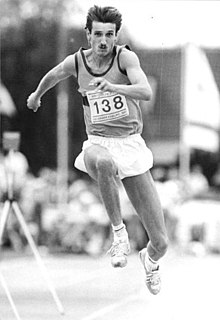 In track and field, wind assistance is the benefit that an athlete receives during a race or event as registered by a wind gauge. Wind is one of many forms of weather which can affect sport.

Zdeňka Bartoňová-Šilhavá is a retired female track and field athlete from the Czech Republic, who set the world record in the women's discus throw on 26 August 1984 with a distance of 74.56 metres (244.6 ft). That mark still is the national record.

The communist government of the German Democratic Republic (GDR) conducted a decades long program of coercive administration and distribution of performance-enhancing drugs, initially testosterone, later mainly anabolic drugs to its elite athletes. The aim of this program was to bolster the state image and prestige by winning medals in international competition such as the Olympic games. The East German doping system started in the 1960s. The system was extremely formalised and heavily based on a notion of secrecy. On a performance level the system could be qualified as being successful. East German athletes were part of the elite and the country achieved successes. However, the doping system gradually affected the health of numerous people.

Marion Reichelt is a German female former track and field athlete who competed in the long jump and heptathlon for East Germany. She was a heptathlon silver medallist at the European Cup Combined Events in 1987 and set a personal best score of 6442 points, ranking seventh on the world lists for that season. She placed sixth at the 1987 World Championships in Athletics in her only global senior performance. She holds a long jump best of 6.66 m.