In the 1950s, psychologist Humphry Osmond developed the concept of socio-architecture hospital design, such as was used in the design of the Weyburn mental hospital in 1951, based partly on Hediger's species-habitat work.

In 1942 Heini Hediger developed the science of wild animals kept in human care and published his concept of a new, special branch of biology, called “zoo biology”. The main statement is that animals in zoos are not to be considered as “captives” but as “owners of property”, namely the territory of their enclosures. They mark and defend this territory as they do in the natural environment and if the enclosures contain these elements which are of importance to them also in their natural environment, they have neither need nor desire to leave this property, but to the contrary, stay within it, even when they would have the opportunity to escape, or return to this “safe haven”, should they by accident have escaped. He consequently emphasized that the quality of the enclosures (“furnishing”, structure) is equally, or even more important than quantity (space, dimensions) and substantiated this with observations in the natural habitat. Among many other things he made clear that animals in the natural habitat do not need huge spaces, when all their needs can be satisfied within close range, that, in fact, animals do not move about for pleasure but to satisfy their needs. Zoo biology therefore implies that the life of animals in their natural surroundings must be studied in order to provide them with appropriate keeping conditions in human care. In animal husbandry, the aim of this concept — guided by the maxim “changing cages into territories” — was to meet the biological and ethological requirements of the exhibited animals. Hediger's publications influenced the keeping of wild animals in human care in particular also in the construction of enclosures and the planning of zoos.

In the 1950s, he began promoting the concept of training zoo animals to elicit biologically suitable behavior and to afford the animal exercise and mental occupation. Further, he observed that in some cases training increased the opportunity for the zookeeper to give needed medical treatments to the animal. He also referred to zoo animal training as “disciplined play”.

In the 1940s he defined the four main tasks of zoos:

In the 1960s, he defined the seven aspects of a zoological garden considering people, money, space, methods, administration, animals and research, in that order.

He reintroduced the new concept of zoo biology and dealt with such matters as food, causes of death, zoo architecture, the meaning of animal to man and man to animal, the exhibition value of animals, and the behavior of humans in zoos.

The frog species Platymantis guppyi was renamed Cornufer hedigeri in 2015, [2] to honor Hediger's merit in the field of taxonomy of frogs and herpetological research in the Southern Pacific in 1931–1932. Also named after Hediger are the praying mantis genus Hedigerella , the land snail Japonia hedigeri , [3] and the venomous snake Parapistocalamus hedigeri . [4]

...hunger and love can take only second place. The satisfaction of hunger and sexual appetite can be postponed; not so escape from a dangerous enemy, and all animals, even the biggest and fiercest, have enemies. As far as higher animals are concerned, escape must thus at any rate be considered as the most important behavior biologically.

Bristol Zoo is a zoo in the city of Bristol in South West England. The zoo's stated mission is to "maintain and defend” biodiversity through breeding endangered species, conserving threatened species and habitats and promoting a wider understanding of the natural world".

A zookeeper, sometimes referred as animal keeper, is a person who manages zoo animals that are kept in captivity for conservation or to be displayed to the public. They are usually responsible for the feeding and daily care of the animals. As part of their routine, the zookeepers may clean the exhibits and report health problems. They may also be involved in scientific research or public education, such as conducting tours and answering questions.

Biosemiotics is a field of semiotics and biology that studies the prelinguistic meaning-making, or production and interpretation of signs and codes in the biological realm. 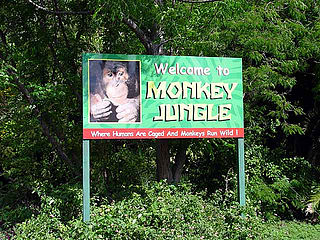 Monkey Jungle is a 30-acre (12 ha) zoological park located in Miami, Florida. Established in 1933 by Joseph DuMond for the exhibition and study of endangered monkeys in semi-natural habitats after releasing 6 Java Monkeys into a subtropical forest, the park is now home to over 300 primates.

Animals that are held by humans and prevented from escaping are said to be in captivity. The term is usually applied to wild animals that are held in confinement, but may also be used generally to describe the keeping of domesticated animals such as livestock or pets. This may include, for example, animals in farms, private homes, zoos and laboratories. Animal captivity may be categorized according to the particular motives, objectives and conditions of the confinement.

Behavioral enrichment is an animal husbandry principle that seeks to enhance the quality of captive animal care by identifying and providing the environmental stimuli necessary for optimal psychological and physiological well-being. Environmental enrichment can either be active or passive, depending on whether it requires direct contact between the animal and the enrichment. A variety of enrichment techniques are used to create desired outcomes similar to an animal's individual and species' history. Each of the techniques used are intended to stimulate the animal's senses similarly to how they would be activated in the wild. Provided enrichment may be seen in the form of auditory, olfactory, habitat factors, food, research projects, training, and objects.

The World Association of Zoos and Aquariums (WAZA) is the "umbrella" organization for the world zoo and aquarium community. Its mission is to provide leadership and support for zoos, aquariums, and partner organizations of the world in animal care and welfare, conservation of biodiversity, environmental education and global sustainability.

Otto Antonius was director of the Tiergarten Schönbrunn in Vienna, zoologist, palaeontologist and co-founder of the modern zoological biology.

Cornufer vogti is a species of frogs in the family Ceratobatrachidae. It is endemic to the Admiralty Islands, Papua New Guinea, where it is known from the Rambutyo Island, its type locality, and from the Manus Island. The specific name vogti honours Theodor Vogt (1881–1932), a German naturalist. Vogt described this species in 1912; however, the name he used, Rana ventricosus, was already used. Thus a replacement name Rana vogti was created by Heini Hediger in 1934. 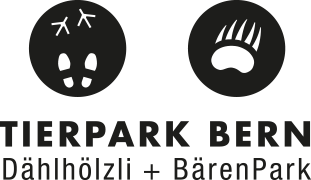 George Bernard Rabb was an American zoologist, and the former director of the Brookfield Zoo from 1976 until 2003. Rabb's pioneering work led the zoo toward its current position as a conservation center, a concept Rabb has championed for zoos everywhere. He joined Brookfield Zoo in 1956 as curator of research. Rabb created the zoo's Education Department and was instrumental in the use of naturalistic exhibitry to provide visitors with environmental immersion experiences throughout the zoo. Dr. Rabb had affiliations with conservation associations worldwide and is a respected spokesman on wildlife conservation issues. He won the 1996 Heini Hediger Award, 1997 Silver Medal, and 2008 Lifetime Achievement Award.

Critical distance for an animal is the distance a human or an aggressor animal has to approach in order to trigger a defensive attack of the first animal. 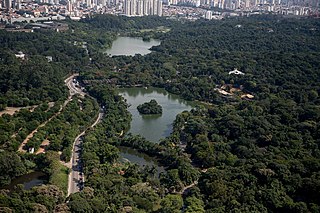 The São Paulo Zoo is the largest zoo in Brazil. With 824,529 m2 of space in what was originally the Atlantic Forest, the zoo is south of the city of São Paulo.

Captivity, or being held captive, is a state wherein humans or other animals are confined to a particular space and prevented from leaving or moving freely. An example in humans is imprisonment. Prisoners of war are usually held in captivity by a government hostile to their own. Animals are held in captivity in zoos, and often as pets and as livestock.