He started his study of orchids at the age of 18 and assisted his father in the writing of Icones. He became a Doctor in Botany with his work on the pollen of orchids (see ‘Selected Works’).

Soon after his graduation, Reichenbach was appointed to the post of extraordinary professor of botany at the Leipzig in 1855. He then became director of the botanical gardens at the Hamburg University (1863-1889).

At that time, thousands of newly discovered orchids were being sent back to Europe. He was responsible for identifying, describing, classifying. Reichenbach named and recorded many of these new discoveries. He probably was not the easiest of personalities, and used to boast about his many descriptions, some of which were superficial, leading to a great deal of taxonomic confusion.

H.G. Reichenbach became the world's leading authority on orchids, after the death of his friend, the 'father of orchidology' John Lindley in 1865.

"Orchid specimens from all over the world were sent to him for identification, and these, together with his copious notes and drawings, forms an immense herbarium which rivaled that of Lindley at Kew" (Reinikka, 'A history of the orchid', p. 215).

His immense herbarium and library were bequeathed to the 'Naturhistorisches Museum' in Vienna, Austria (instead, as expected, to the Kew Gardens), on the condition that it would not be consulted during the first 25 years after his death. Reichenbach probably acted this way out of resentment of the appointment of Robert Allen Rolfe, a self-taught orchid expert, as the top taxonomist at Kew. This resulted in a great number of double or multiple descriptions of orchid species, which had to be corrected afterwards.

After Reichenbach's death, his work was continued by Friedrich Wilhelm Ludwig (“Fritz”) Kraenzlin (1847-1934).

In 1886, Frederick Sander commissioned Henry George Moon (1857-1905), a pure colourist, to paint 192 watercolour plates of orchids with descriptions by Reichenbach (1888-1894). These monthly publications became known as the Reichenbachia and are the richest reference sources on orchids ever produced.

The standard author abbreviation Rchb.f. is used to indicate this person as the author when citing a botanical name. [1]

Aa is a genus of plants of the family Orchidaceae.

Heinrich Gottlieb Ludwig Reichenbach was a German botanist and ornithologist. It was he who first requested Leopold Blaschka to make a set of glass marine invertebrate models for scientific education and museum showcasing, the successful commission giving rise to the creation of the Blaschkas' Glass sea creatures and, subsequently and indirectly, the more famous Glass Flowers.

Within the Orchidaceae, Hormidium was originally a subgenus of the genus Epidendrum, but was later raised to a full genus. It is now considered not to be distinct from the genus Prosthechea, of which it is a synonym. Most of the species of Hormidium have been transferred to Prosthechea, although others are now classified in Encyclia, Epidendrum, Homalopetalum, and Lepanthes.

Meiracyllium, abbreviated as Mrclm in horticultural trade, is a genus of orchids and the sole genus of the subtribe Meiracyllinae. The genus was erected by Heinrich Gustav Reichenbach. It is native to Mexico and Central America. At present, two species are recognized: 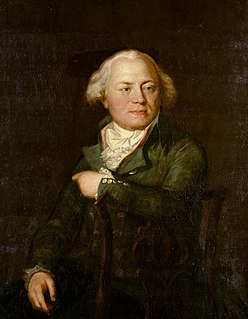 Franz Andreas Bauer was an Austrian microscopist and botanical artist. The standard author abbreviation F.A.Bauer is used to indicate this person as the author when citing a botanical name.

Hofmeisterella is a genus of orchids native to South America. Two species are known: 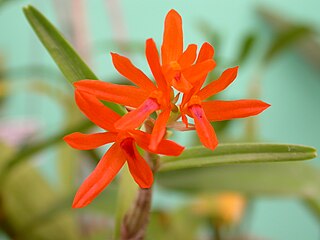 Scaphyglottis is a genus of orchids native to Mexico, Central America, northern South America and parts of the Caribbean. The current concept of this genus is the result of combining several genera which have been described at various times. The concept is characterized by the growth habit: not only are new pseudobulbs added at the base of the old ones, but new pseudobulbs also grow at the apices of the old ones. Many species are quite similar and difficult to distinguish, but some are clearly distinct. A few have showy colors. The genus comprises nearly 70 species. 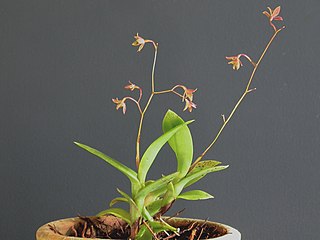 Epidendrum compressum is a species of orchid in the genus Epidendrum from wet montane forests of Trinidad, Venezuela, Colombia, Ecuador, Peru and Bolivia.

John Lindley published Epidendrum subg. Spathium of the Orchidaceae. According to Lindley's diagnosis, the E. subg. Spathium is recognizable by is sympodial habit with individual stems being slender and covered by the bases of the distichous leaves, by the lip of the flower being adnate to the column to its apex, and by the inflorescence emerging from at least one spathe, similar to nearly all members of the genus Cattleya as understood in the year 2000. Reichenbach recognized 52 species in this subgenus, of which Kew accepts 48 :

The subgenus Hormidium of the genus Epidendrum of family Orchidaceae features short pseudobulbs, a creeping growth habit, a very short peduncle, and a lip adnate to the column to its apex. The subgenus was published by Lindley in 1841.

Epidendrum sect. PolycladiaRchb.f. 1861 is a section of the Subgenus E. subg. AmphiglottiumLindl. of the Genus Epidendrum of the Orchidaceae. This plants in this section differ from the plants in the other sections of E. subg. Amphiglottium by having truly paniculate inflorescences: the section E. sect. Holochila is characterized by racemose inflorescences and an undivided lip, and the section E. sect. Schistochila is characterized by racemose inflorescences and a lobed lip.

Elythranthera, commonly known as enamel orchids, was a genus of flowering plants in the orchid family, Orchidaceae. It contained two species and a named hybrid, all endemic to the south-west of Western Australia. The genus was first formally described in 1963 by the Australian botanist Alex George who published his description in Western Australian Naturalist. Orchids in the genus Elythranthera had previously been included in Glossodia section Elythranthera. 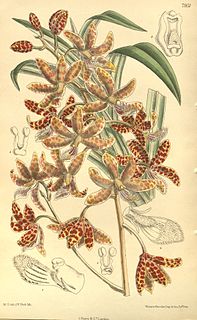 Dipodium pictum, commonly known as brittle climbing-orchid or climbing hyacinth-orchid, is an orchid species that is native to Malesia and the Cape York Peninsula in Australia.

Caladenia lindleyana, commonly known as the Lindley's spider orchid is a species of orchid endemic to Tasmania. It has a single, hairy leaf and one or two greenish-yellow flowers tinged with red and with thin dark tips on the sepals. Very few plants of this species survive with only one plant, which has not been seen since 1997, protected in a reserve.