Heliodorus (Greek : Ἡλιόδωρος) was a surgeon in the 1st century AD, probably from Egypt, and mentioned in the Satires of Juvenal. This Heliodorus wrote several books on medical technique which have survived in fragments and in the works of Oreibasius. 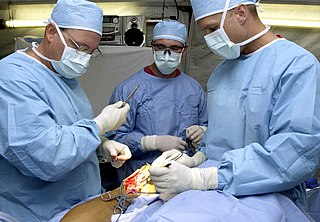 Surgery is a medical specialty that uses operative manual and instrumental techniques on a patient to investigate or treat a pathological condition such as a disease or injury, to help improve bodily function or appearance or to repair unwanted ruptured areas.

Seleucus IV Philopator, ruler of the Hellenistic Seleucid Empire, reigned from 187 BC to 175 BC over a realm consisting of Syria, Mesopotamia, Babylonia and Nearer Iran. 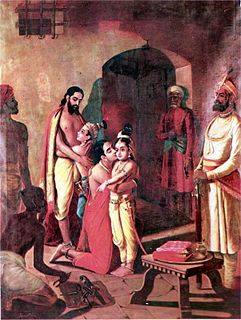 In the Bhagavad Purana, Vasudeva was the father of the eighth incarnation of Vishnu, Krishna, and his siblings Balarama and Subhadra. He was a Yadav Prince. He was the son of great Yadav king Shurasena. He was the brother of Nanda Baba, who took care of Krishna during his early years as a child. His sister Kunti was married to Pandu. Kunti plays a big role later in the war Mahabharata.

Antialcidas Nikephoros was an Indo-Greek king of the Indo-Greek Kingdom, who reigned from his capital at Taxila. Bopearachchi has suggested that he ruled from ca. 115 to 95 BCE in the western parts of the Indo-Greek realms, whereas R. C. Senior places him around 130 to 120 BCE and also in eastern Punjab. Senior does however believe that he ruled in tandem with King Lysias. 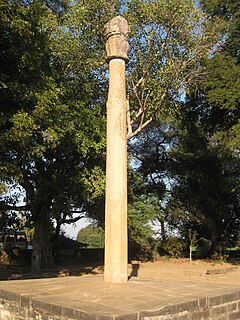 The Heliodorus pillar is a stone column that was erected around 113 BCE in central India in Vidisha near modern Besnagar, by Heliodorus, an Indo-Greek ambassador of the Indo-Greek king Antialcidas in Taxila to the court of the Shunga king Bhagabhadra. Historically, it is one of the earliest known inscriptions related to the Vaishnavism in India. The site is located about 60 kilometres (37 mi) northeast from Bhopal and 11 kilometres (6.8 mi) from the Buddhist stupa of Sanchi.

A Greek Slave is a musical comedy in two acts, first performed on 8 June 1898 at Daly's Theatre in London, produced by George Edwardes and ran for 349 performances. The score was composed by Sidney Jones with additional songs by Lionel Monckton and lyrics by Harry Greenbank and Adrian Ross. The libretto was written by Owen Hall. It starred Marie Tempest, Letty Lind, Hayden Coffin, Scott Russell, Huntley Wright and Rutland Barrington among other popular London stars. The show had a brief Broadway run in 1899.

Bhagabhadra was one of the kings of the Indian Shunga dynasty. He ruled in north, central, and eastern India around 110 BCE. Although the capital of the Shungas was at Pataliputra, he was also known to have held court at Vidisha. It is thought that the name Bhagabhadra also appears in the regnal lists of the Shungas in the Puranic records, under the name Bhadraka, fifth ruler of the Shungas. 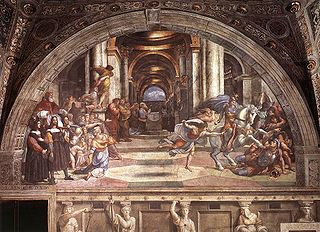 The Expulsion of Heliodorus from the Temple is a fresco of the Italian renaissance painter Raphael. It was painted between 1511 and 1513 as part of Raphael's commission to decorate with frescoes the rooms that are now known as the Stanze di Raffaello, in the Apostolic Palace in the Vatican. It is located in the room that takes its name from it, the Stanza di Eliodoro.

The Meeting of Leo I and Attila is a fresco by the Italian Renaissance artist Raphael and his assistant Giulio Romano. It was painted in 1514 as part of Raphael's commission to decorate the rooms that are now known as the Stanze di Raffaello, in the Apostolic Palace in the Vatican. It is located in the Stanza di Eliodoro, which is named after The Expulsion of Heliodorus from the Temple.

Heliodorus was a legate of Seleucus IV Philopator c. 187 BC – 175 BC. Some historical sources say that he assassinated Seleucus and seized the throne for himself, before Antiochus IV Epiphanes, the brother of the late king, with the help of the Pergamon monarch, Eumenes II, recovered it.

Heliodorus of Alexandria was a Neoplatonist philosopher who lived in the 5th century AD. He was the son of Hermias and Aedesia, and the younger brother of Ammonius. His father, Hermias, died when he was young, and his mother, Aedesia, raised him and his brother in their home city of Alexandria until they were old enough to go to philosophy school. Aedesia took them to Athens where they studied under Proclus. Eventually they returned to Alexandria, where they both taught philosophy. Damascius, who was taught by Heliodorus, describes him as less gifted than his elder brother, and more superficial in his character and studies.

Saint Heliodorus was the first bishop of Altinum (Altino) in the 4th century. He was born in Dalmatia. Like Chromatius, he was a disciple of Valerianus, the bishop of Aquileia.

Heliodorus of Catania is a semi-legendary personage accused by his contemporaries of being a necromancer practicing witchcraft.

Gaius Avidius Heliodorus was a Roman politician and a noted orator.