Heliodorus Emesenus or Heliodorus of Emesa (Ancient Greek : Ἡλιόδωρος ὁ Ἐμεσηνός) is the author of the ancient Greek novel called the Aethiopica (Αἰθιοπικά) or Theagenes and Chariclea (Θεαγένης καὶ Χαρίκλεια), which has been dated to the 220s or 370s AD. [1]

He identifies himself at the end of his work as

a Phoenician from Emesa [modern Homs, Syria], of the line of Helios [also translated as: 'from the race of the sun' [2] ], Theodosius' son Heliodorus [3]

According to Tim Whitmarsh, 'from the race of the sun' "looks like a claim to hereditary priesthood," though "uncertainties" remain. [2] According to The Cambridge History of Classical Literature, "the personal link here established between the writer and Helios has also a literary purpose, as has Calasiris' flashback narrative" [3] (see Aethiopica § Plot summary). The later tradition maintaining that Heliodorus had become a Christian bishop is likely fictional. [2] [lower-alpha 1]

The Emesenes were a culturally complex group, including Arab, Phoenician and Greek elements, and, since the third century at any rate, having a connection with the Roman imperial household (the empress Julia Domna was from Emesa, as was the cult of Elagabal which inspired the emperor Heliogabalus). [5] 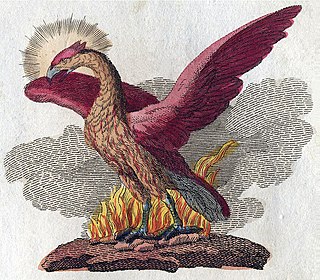 In ancient Greek folklore, a phoenix is a long-lived bird that cyclically regenerates or is otherwise born again. Associated with the sun, a phoenix obtains new life by arising from the ashes of its predecessor. Some legends say it dies in a show of flames and combustion, others that it simply dies and decomposes before being born again. In the Motif-Index of Folk-Literature, a tool used by folklorists, the phoenix is classified as motif B32.

Helios, also Helius, in ancient Greek religion and myth, is the god and personification of the Sun, often depicted in art with a radiant crown and driving a horse-drawn chariot through the sky. He was a guardian of oaths and also the god of sight. 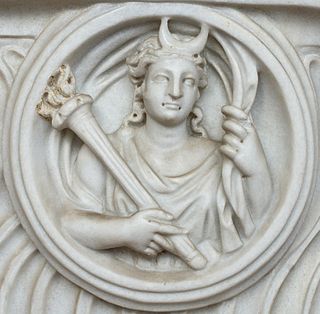 In Greek mythology, Selene is the goddess of the Moon. She is the daughter of the Titans Hyperion and Theia and sister of the sun god Helios and Eos, goddess of the dawn. She drives her moon chariot across the heavens. Several lovers are attributed to her in various myths, including Zeus, Pan, and the mortal Endymion. In classical times, Selene was often identified with Artemis, much as her brother, Helios, was identified with Apollo. Selene and Artemis were also associated with Hecate and all three were regarded as moon and lunar goddesses, but only Selene was regarded as the personification of the Moon itself. Her Roman equivalent is Luna.

Elagabalus, Aelagabalus, Heliogabalus, or simply Elagabal was an Arab-Roman sun god, initially venerated in Emesa, Syria. Although there were many variations of the name, the god was consistently referred to as Elagabalus in Roman coins and inscriptions from AD 218 on, during the reign of emperor Elagabalus.

Chariton of Aphrodisias was the author of an ancient Greek novel probably titled Callirhoe, nevertheless it is regularly referred to as Chaereas and Callirhoe. Recent evidence of fragments of the text on papyri suggests that the novel may have been written in the mid 1st century AD, making it the oldest surviving complete ancient prose romance and the only one to make use of apparent historiographical features for background verisimilitude and structure, in conjunction with elements of Greek mythology, as Callirhoë is frequently compared to Aphrodite and Ariadne and Chaereas to numerous heroes, both implicitly and explicitly. As the fiction takes place in the past, and historical figures interact with the plot, Callirhoe may be understood as the first historical novel; it was later imitated by Xenophon of Ephesus and Heliodorus of Emesa, among others.

In Greek mythology, Hyperion was one of the twelve Titan children of Gaia (Earth) and Uranus (Sky) who, led by Cronus, overthrew their father Uranus and were themselves later overthrown by the Olympians. With his sister, the Titaness Theia, Hyperion fathered Helios (Sun), Selene (Moon) and Eos (Dawn). John Keats's abandoned epic poem Hyperion is among the literary works that feature the figure. 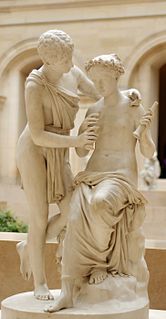 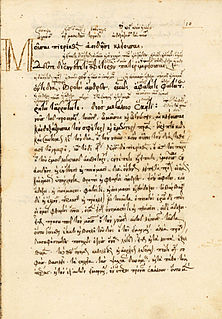 Ancient Greek literature is literature written in the Ancient Greek language from the earliest texts until the time of the Byzantine Empire. The earliest surviving works of ancient Greek literature, dating back to the early Archaic period, are the two epic poems the Iliad and the Odyssey, set in an idealized archaic past today identified as having some relation to the Mycenaean era. These two epics, along with the Homeric Hymns and the two poems of Hesiod, Theogony and Works and Days, comprised the major foundations of the Greek literary tradition that would continue into the Classical, Hellenistic, and Roman periods.

Daphnis and Chloe is an ancient Greek novel written in the Roman Empire, the only known work of the second-century AD Greek novelist and romance writer Longus.

The Emesenedynasty, also called the Sampsigeramids or the Sampsigerami, were a Roman client dynasty of Arab priest-kings known to have ruled by 46 BC from Arethusa and later from Emesa, Syria, likely until between 72 and 78/79, or at most by the reign of Emperor Antoninus Pius (138–161). Iamblichus, the famous Neoplatonist philosopher of the third century, was one of their descendants, as was empress Julia Domna, matriarch of the Severan dynasty. 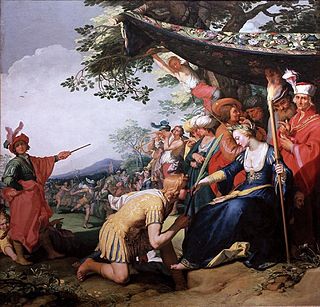 The Aethiopica or Theagenes and Chariclea is an ancient Greek novel which has been dated to the 220s or 370s AD. It was written by Heliodorus of Emesa and is his only known work.

John Robert Morgan is a British academic working at Swansea University in Wales. He is primarily known for writing books on Classics, and for contributing to a number of journals, often with colourful views. 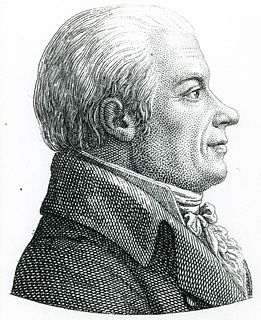 Christoph Wilhelm Mitscherlich was a German classical scholar. He wrote several books on ancient Greek literature. He is best remembered for his edition of the Odes and Epodes by the Roman poet Horace.

Timothy John Guy Whitmarsh, is a British classicist and the second A. G. Leventis Professor of Greek Culture at the University of Cambridge. He is best known for his work on the Greek literary culture of the Roman Empire, especially the Second Sophistic and the ancient Greek novel.

Five ancient Greek novels survive complete from antiquity: Chariton's Callirhoe, Achilles Tatius' Leucippe and Clitophon, Longus' Daphnis and Chloe, Xenophon of Ephesus' Ephesian Tale, and Heliodorus of Emesa's Aethiopica. There are also numerous fragments preserved on papyrus or in quotations, and summaries in Bibliotheca by Photius, a 9th-century Ecumenical Patriarch. The unattributed Metiochus and Parthenope may be preserved by what appears to be a faithful Persian translation by the poet Unsuri. The Greek novel as a genre began in the first century CE, and flourished in the first four centuries; it is thus a product of the Roman Empire. The exact relationship between the Greek novel and the Latin novels of Petronius and Apuleius is debated, but both Roman writers are thought by most scholars to have been aware of and to some extent influenced by the Greek novels.

The Faculty of Classics is one of the constituent departments of the University of Cambridge. It teaches the Classical Tripos. The Faculty is divided into five caucuses ; literature, ancient philosophy, ancient history, Classical art and archaeology, linguistics, and interdisciplinary studies.