The proof also employs an identity of normalized wavefunctions – that derivatives of the overlap of a wavefunction with itself must be zero. Using Dirac's bra–ket notation these two conditions are written as

The proof then follows through an application of the derivative product rule to the expectation value of the Hamiltonian viewed as a function of λ:

According to the Rayleigh–Ritz variational principle, the eigenfunctions of the Schrödinger equation are stationary points of the functional (which is nicknamed[ by whom? ]Schrödinger functional for brevity):

The eigenvalues are the values that the Schrödinger functional takes at the stationary points:

By differentiating Eq. (3) using the chain rule, one obtains:

Due to the variational condition, Eq. (4), the second term in Eq. (5) vanishes. In one sentence, the Hellmann–Feynman theorem states that the derivative of the stationary values of a function(al) with respect to a parameter on which it may depend, can be computed from the explicit dependence only, disregarding the implicit one.[ citation needed ] On account of the fact that the Schrödinger functional can only depend explicitly on an external parameter through the Hamiltonian, Eq. (1) trivially follows.

The most common application of the Hellmann–Feynman theorem is to the calculation of intramolecular forces in molecules. This allows for the calculation of equilibrium geometries  – the nuclear coordinates where the forces acting upon the nuclei, due to the electrons and other nuclei, vanish. The parameter λ corresponds to the coordinates of the nuclei. For a molecule with 1 ≤ i ≤ N electrons with coordinates {ri}, and 1 ≤ α ≤ M nuclei, each located at a specified point {Rα={Xα,Yα,Zα}} and with nuclear charge Zα, the clamped nucleus Hamiltonian is

The x-component of the force acting on a given nucleus is equal to the negative of the derivative of the total energy with respect to that coordinate. Employing the Hellmann–Feynman theorem this is equal to

Only two components of the Hamiltonian contribute to the required derivative – the electron-nucleus and nucleus-nucleus terms. Differentiating the Hamiltonian yields [6]

Insertion of this in to the Hellmann–Feynman theorem returns the x-component of the force on the given nucleus in terms of the electronic density (ρ(r)) and the atomic coordinates and nuclear charges:

An alternative approach for applying the Hellmann–Feynman theorem is to promote a fixed or discrete parameter which appears in a Hamiltonian to be a continuous variable solely for the mathematical purpose of taking a derivative. Possible parameters are physical constants or discrete quantum numbers. As an example, the radial Schrödinger equation for a hydrogen-like atom is

which depends upon the discrete azimuthal quantum number l. Promoting l to be a continuous parameter allows for the derivative of the Hamiltonian to be taken:

In order to compute the energy derivative, the way

For a general time-dependent wavefunction satisfying the time-dependent Schrödinger equation, the Hellmann–Feynman theorem is not valid. However, the following identity holds: [8] [9]

The proof only relies on the Schrödinger equation and the assumption that partial derivatives with respect to λ and t can be interchanged.

In particle physics, the Dirac equation is a relativistic wave equation derived by British physicist Paul Dirac in 1928. In its free form, or including electromagnetic interactions, it describes all spin-½ massive particles such as electrons and quarks for which parity is a symmetry. It is consistent with both the principles of quantum mechanics and the theory of special relativity, and was the first theory to account fully for special relativity in the context of quantum mechanics. It was validated by accounting for the fine details of the hydrogen spectrum in a completely rigorous way.

In quantum chemistry and molecular physics, the Born–Oppenheimer (BO) approximation is the best known mathematical approximation in molecular dynamics. Specifically, it is the assumption that the wave functions of atomic nuclei and electrons in a molecule can be treated separately, based on the fact that the nuclei are much heavier than the electrons. The approach is named after Max Born and J. Robert Oppenheimer who proposed it in 1927, in the early period of quantum mechanics.

In quantum mechanics, perturbation theory is a set of approximation schemes directly related to mathematical perturbation for describing a complicated quantum system in terms of a simpler one. The idea is to start with a simple system for which a mathematical solution is known, and add an additional "perturbing" Hamiltonian representing a weak disturbance to the system. If the disturbance is not too large, the various physical quantities associated with the perturbed system can be expressed as "corrections" to those of the simple system. These corrections, being small compared to the size of the quantities themselves, can be calculated using approximate methods such as asymptotic series. The complicated system can therefore be studied based on knowledge of the simpler one. In effect, it is describing a complicated unsolved system using a simple, solvable system.

In condensed matter physics, Bloch's theorem states that solutions to the Schrödinger equation in a periodic potential take the form of a plane wave modulated by a periodic function. Mathematically, they are written: 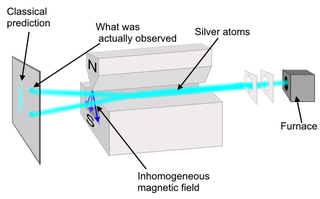 In mathematics, the Fubini–Study metric is a Kähler metric on projective Hilbert space, that is, on a complex projective space CPn endowed with a Hermitian form. This metric was originally described in 1904 and 1905 by Guido Fubini and Eduard Study.

The Pulay stress or Pulay forces is an error that occurs in the stress tensor obtained from self-consistent field calculations due to the incompleteness of the basis set.

The time-evolving block decimation (TEBD) algorithm is a numerical scheme used to simulate one-dimensional quantum many-body systems, characterized by at most nearest-neighbour interactions. It is dubbed Time-evolving Block Decimation because it dynamically identifies the relevant low-dimensional Hilbert subspaces of an exponentially larger original Hilbert space. The algorithm, based on the Matrix Product States formalism, is highly efficient when the amount of entanglement in the system is limited, a requirement fulfilled by a large class of quantum many-body systems in one dimension.

In mathematics, the Schur orthogonality relations, which were proven by Issai Schur through Schur's lemma, express a central fact about representations of finite groups. They admit a generalization to the case of compact groups in general, and in particular compact Lie groups, such as the rotation group SO(3). 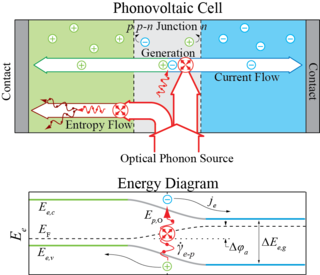 A phonovoltaic (pV) cell converts vibrational (phonons) energy into a direct current much like the photovoltaic effect in a photovoltaic (PV) cell converts light (photon) into power. That is, it uses a p-n junction to separate the electrons and holes generated as valence electrons absorb optical phonons more energetic than the band gap, and then collects them in the metallic contacts for use in a circuit. The pV cell is an application of heat transfer physics and competes with other thermal energy harvesting devices like the thermoelectric generator.