Helmut Jahn (January 4, 1940 – May 8, 2021) was a German-American architect, known for buildings such as the Sony Center on the Potsdamer Platz in Berlin, Germany; the Messeturm in Frankfurt, Germany; One Liberty Place in Philadelphia, Pennsylvania (formerly the tallest building in Philadelphia); and the Suvarnabhumi Airport, an international airport in Bangkok, Thailand.

His recent projects included 50 West Street, a residential tower in New York City in 2016 and the ThyssenKrupp Test Tower in Rottweil, Germany in 2017.

Jahn was born Jan. 4, 1940 in Zirndorf, near Nuremberg, Germany. [1] His father Wilhelm Anton Jahn was a schoolteacher in special education, his mother Karolina Wirth a housewife. [2] [3] Jahn grew up watching the reconstruction of the city, which had been largely destroyed by Allied bombing campaigns. [4]

He studied architecture at the Technical University of Munich from 1960 to 1965, [5] and worked with Peter C. von Seidlein for a year after graduation. [1] In 1966, he went to Chicago to further study architecture under Myron Goldsmith and Fazlur Khan at the Illinois Institute of Technology on a Rotary Scholarship, earning a Master's degree in 1967. [3]

Jahn joined Charles Francis Murphy's architecture firm, C. F. Murphy Associates, in 1967 and was appointed Executive Vice President and Director of Planning and Design of the firm in 1973.[ citation needed ] He took sole control in 1981, renaming the firm Murphy/Jahn (even though Murphy had retired).[ citation needed ] Murphy died in 1985.

Generally inspired by Ludwig Mies van der Rohe, yet opposed to the doctrinal application of modernism by his followers, in 1978, Jahn became the eighth member of the Chicago Seven. His architectural style shifted from the modernism of the Miesian tradition to a postmodernist one with high-tech stylizations. [10] Jahn established his reputation in 1985 with the State of Illinois Center in Chicago which prompted him to be dubbed "Flash Gordon". [11] In addition to the main seat in Chicago, the company has offices in Berlin and Shanghai.

In his native town of Nuremberg, however, a project by Jahn was rejected by a citizens' referendum in 1996. [50]

Jahn was interested in yachting, and in the late 1990s owned at least three yachts named Flash Gordon (one of his nicknames). [57] In 1995, Jahn's Flash Gordon 2 won the annual Chicago to Mackinac Race, the oldest freshwater yacht race in the world. [58] In 1998, Jahn invited his fellow Vietnam War veteran, George Henry, to race with him in the Waterbury Channel Open. In 1997, Flash Gordon 3 won the Admiral's Cup. [57] [59] In 2017 the Flash Gordon 6 team captured its third straight North American Championship. [60]

Skidmore, Owings & Merrill (SOM) is a global architectural, urban planning and engineering firm. It was founded in Chicago in 1936 by Louis Skidmore and Nathaniel Owings. In 1939, they were joined by engineer John O. Merrill. The firm opened its second office, in New York City, in 1937 and has since expanded all over the world, with offices in San Francisco (1946), Los Angeles, Washington, D.C., London, Hong Kong, Shanghai, Mumbai and Dubai.

The year 1990 in architecture involved some significant architectural events and new buildings. 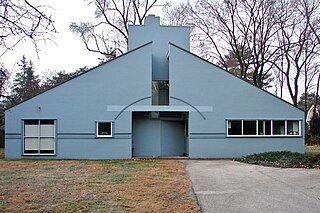 Postmodern architecture is a style or movement which emerged in the 1960s as a reaction against the austerity, formality, and lack of variety of modern architecture, particularly in the international style advocated by Philip Johnson and Henry-Russell Hitchcock. The movement was introduced by the architect and urban planner Denise Scott Brown and architectural theorist Robert Venturi in their book Learning from Las Vegas. The style flourished from the 1980s through the 1990s, particularly in the work of Scott Brown & Venturi, Philip Johnson, Charles Moore and Michael Graves. In the late 1990s, it divided into a multitude of new tendencies, including high-tech architecture, neo-futurism and deconstructivism. 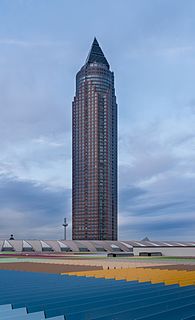 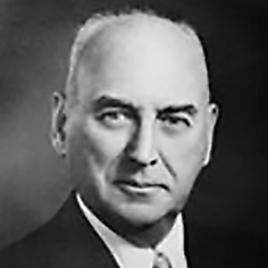 Charles Francis Murphy was an American architect based in Chicago, Illinois.

The Harold Washington Library Center is the central library for the Chicago Public Library System. It is located just south of the Loop 'L', at 400 S. State Street in Chicago, in the U.S. state of Illinois. It is a full-service library and is ADA compliant. As with all libraries in the Chicago Public Library system, it has free Wi-Fi internet service. The building contains approximately 756,000 square feet (70,200 m2) of work space. The total square footage is approximately 972,000 square feet (90,300 m2) including the rooftop winter-garden penthouse. It is named in honor of Harold Washington.

The James R. Thompson Center (JRTC), originally the State of Illinois Center, is located at 100 W. Randolph Street in the Loop district of Chicago and houses offices of the Illinois state government. The building serves as a secondary capitol for the State of Illinois in the most populated city and county of the state. It is considered one of the most significant postmodern buildings in the city of Chicago. 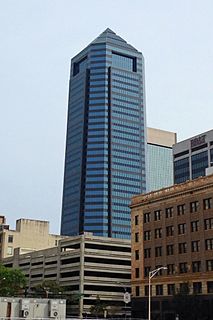 Bank of America Tower is a skyscraper in the downtown area of Jacksonville, Florida, at the northwest corner of Bay and Laura streets. At 617 ft (188 m), it is the tallest building in Jacksonville, and the seventeenth-tallest in Florida. It was built as the headquarters of Barnett Bank and originally named Barnett Center, but the name was changed to NationsBank Tower in 1998 after Barnett Bank was acquired by NationsBank. NationsBank soon acquired Bank of America and the building's name was changed to Bank of America Tower in 1999. The 42-floor structure was designed by German-American architect Helmut Jahn, and is constructed of reinforced concrete.

Adrian Smith + Gordon Gill Architecture (AS+GG), an architecture firm and design firm based in Chicago, is engaged in the design and development of energy-efficient and sustainable architecture. AS+GG designs buildings, cities, masterplans and components of these, for an international clientele, with projects located throughout the world. The primary uses of these designs are civic, commercial, cultural, hospitality, residential and mixed-use. AS+GG also specializes in supertall skyscrapers, such as the Jeddah Tower, which will overtake the Burj Khalifa as the world's tallest building when completed. 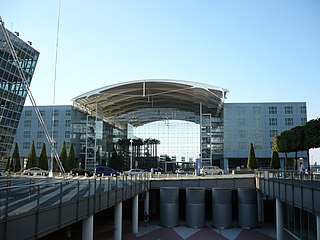 The Bank of the Southwest Tower was a proposed building located in Houston, Texas, at 1,404 ft tall. It would have been the second tallest building in North America after the Willis Tower in Chicago. With an estimated construction cost of $350–400 million, the project was cancelled before construction commenced, due to lack of funds during the economic downturn. 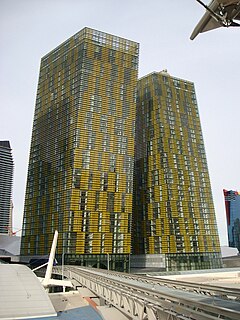 Veer Towers are twin 37-story, 480-foot (150 m), residential towers located within CityCenter on the Las Vegas Strip in Paradise, Nevada. Each tower houses 335 luxury condominium units ranging from 537 to 3,412 square feet. The two towers were designed by Murphy/Jahn Architects of Chicago and lean in opposite directions.

Francisco Gonzalez-Pulido is a Mexican architect noted for his expressive yet rational design approach. From 1992 through 1998, he worked on his own and in 1999 he joined the Chicago firm “Murphy/Jahn”. He has worked on a wide range of building typologies with a strong emphasis on the design of skyscrapers and airports, in America, Europe, Asia and the Middle East. After a long time working with Helmut Jahn, he became its first partner in 2009 and president in 2012. In the Fall of 2017, Francisco Gonzalez Pulido left JAHN to establish his own international architectural practice, FGP Atelier.

The Michigan City Public Library is a 35,000-square-foot (3,300 m2) one level facility located in Michigan City, Indiana. It was designed by the world-renowned architect Helmut Jahn. Jahn designed the building while working for the Chicago architecture firm C.F. Murphy, which later would become Jahn Architects. The design began in 1974 and the construction was completed in 1977.

1000M is a skyscraper under construction in the Historic Michigan Boulevard District portion of Michigan Avenue in the Chicago Loop. Designed by Helmut Jahn, it will be a 74-story, 832-foot (253.6 m) tall residential condominium tower located at 1000 South Michigan Avenue. The 323-unit building will include one to four bedroom luxury condominiums. Construction on 1000M officially began in December 2019 and was originally expected to finish in mid-to-late 2022.

Loebl Schlossman & Hackl is an American architecture firm based in Chicago, Illinois.

Four, also known as Four Frankfurt, is a major mixed-use skyscraper project in Frankfurt, consisting of a complex of four skyscrapers under construction. It is located in the area known as the Deutsche Bank triangle in the Innenstadt borough. The tallest skyscraper will have a height of 233 metres (764 ft), making it both Frankfurt and Germany's third-tallest building upon its estimated completion in 2023.