The first record of Henley is from 1179, when it is recorded that King Henry II "had bought land for the making of buildings". King John granted the manor of Benson and the town and manor of Henley to Robert Harcourt in 1199. A church at Henley is first mentioned in 1204. In 1205 the town received a tax for street paving, and in 1234 the bridge is first mentioned. In 1278 Henley is described as a hamlet of Benson with a chapel. The street plan was probably established by the end of the 13th century.

As a demesne of the crown it was granted in 1337 to John de Molyns, whose family held it for about 250 years.

The existing Thursday market, it is believed, was granted by a charter of King John. A market was certainly in existence by 1269; however, the jurors of the assize of 1284 said that they did not know by what warrant the earl of Cornwall held a market and fair in the town of Henley. The existing Corpus Christi fair was granted by a charter of Henry VI.

During the Black Death pandemic that swept through England in the 14th century, Henley lost 60% of its population. [2]

By the beginning of the 16th century, the town extended along the west bank of the Thames from Friday Street in the south to the Manor, now Phyllis Court, in the north and took in Hart Street and New Street. To the west, it included Bell Street and the Market Place.

Henry VIII granted the use of the titles "mayor" and "burgess", and the town was incorporated in 1568 in the name of the warden, portreeves, burgesses and commonalty. The original charter was issued by Elizabeth I but replaced by one from George I in 1722. [4]

Henley suffered at the hands of both parties in the Civil War. Later, William III rested here on his march to London in 1688, at the nearby recently rebuilt Fawley Court, and received a deputation from the Lords. The town's period of prosperity in the 17th and 18th centuries was due to manufactures of glass and malt, and trade in corn and wool. Henley-on-Thames supplied London with timber and grain.

Prior to 1974 Henley was a municipal borough with a Borough Council comprising twelve Councillors and four Aldermen, headed by a Mayor. The Local Government Act 1972 resulted in the re-organisation of local government in that year. Henley became part of Wallingford District Council, subsequently renamed South Oxfordshire District Council. The borough council was replaced by a town council but the role of mayor was retained.

Henley Bridge is a five arched bridge across the river built in 1786. It is a Grade I listed historic structure. During 2011 the bridge underwent a £200,000 repair programme after being hit by the boat Crazy Love in August 2010. [6] About 1 mile (1.5 kilometres) upstream of the bridge is Marsh Lock. [7]

Henley Town Hall, which maintains a prominent position in the Market Place, was designed by Henry Hare and completed in 1900. [8]

Chantry House is the second Grade I listed building in the town. It is unusual in having more storeys on one side than on the other. [9]

The Church of England parish church of St Mary the Virgin is nearby and has a 16th-century tower. [10] [11]

The Old Bell is a pub in the centre of Henley on Bell Street. The building has been dated from 1325: the oldest-dated building in the town. [12]

To celebrate Queen Victoria's Diamond Jubilee, 60 oak trees were planted in the shape of a Victoria Cross near Fairmile, the long straight road to the northwest of the town. [13] [14]

Two notable buildings just outside Henley, in Buckinghamshire, are:

Lloyds Bank's analysis of house price growth in 125 market towns in England over the year to June 2016 (using Land Registry data), found that Henley was the second-most expensive market town in the country with an average property price of £748,001. [16]

The town's railway station is the terminus of the Henley Branch Line from Twyford. In the past there have been direct services to London Paddington. There are express mainline rail services from Reading (6  miles or 10 km away) to Paddington. Trains from High Wycombe (12 miles or 20 km away) go to London Marylebone. The M4 motorway (junction 8/9) and the M40 motorway (junction 4) are both about 7 miles (12 km) away. There are 2 bus services that runs from Reading through to Wycombe via Henley. They are the 800 and the 850 bus service. [17]

The River and Rowing Museum, located in Mill Meadows, is the town's one museum. It was established in 1998, and officially opened by Queen Elizabeth II. The museum, designed by the architect David Chipperfield, features information on the River Thames, the sport of rowing, and the town of Henley itself.

The University of Reading's Henley Business School is near Henley, as is Henley College.

Henley is a world-renowned centre for rowing. Each summer the Henley Royal Regatta is held on Henley Reach, a naturally straight stretch of the river just north of the town. It was extended artificially. The event became "Royal" in 1851, when Prince Albert became patron of the regatta. [18]

The regatta depicted throughout Dead in the Water, an episode of the British detective television series Midsomer Murders, was filmed at Henley.

Henley has the oldest football team Henley Town F.C. recognised by the Oxfordshire Football Association, they play at The Triangle ground. Henley also has a rugby union club Henley Hawks which play at the Dry Leas ground, a hockey club Henley Hockey Club which play at Jubilee Park, and Henley Cricket Club which has played at Brakspear Ground since 1886. [20] a new club in Henley was started in September 2016 called Henley Lions FC.

As Henley is on an overlap of TV regions, it is possible to receive signals from both BBC London and BBC South transmitters, as well as ITV London and ITV Meridian (West). However, the local relay transmitter for Henley only broadcasts programmes from ITV and BBC London, making Henley the only part of Oxfordshire included within the London television region.

Henley-on-Thames was represented in the 2010 American drama film The Social Network as the site of a rowing competition between the US and the Netherlands.

Henley is twinned with: 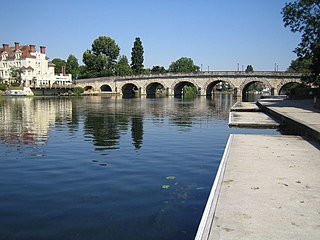 Maidenhead is a market town in Berkshire, England, on the southwestern bank of the River Thames. It has an estimated population of 70,374. It is a town in the Royal Borough of Windsor and Maidenhead and the part of the Berkshire county, forming part of the border with southern Buckinghamshire. Travelling by road, the town is situated 28 miles (45 km) west of Charing Cross, London, 13 miles (21 km) east-northeast of the county town of Reading, 31 miles (50 km) southeast of Oxford, 8 miles (13 km) east-southeast of Henley-on-Thames, 8 miles (13 km) south of High Wycombe and 7 miles (11 km) northwest of Windsor. The town differs from the Parliamentary constituency of Maidenhead, which includes a number of outer suburbs and villages such as Twyford, Charvil, Remenham, Ruscombe and Wargrave. 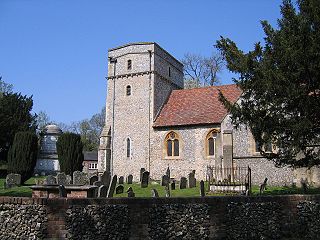 Marlow is a town and civil parish within the Unitary Authority of Buckinghamshire, England. It is located on the River Thames, 4 miles (6 km) south south-west of High Wycombe, 5 miles (8 km) west north-west of Maidenhead and 33 miles (53 km) west of central London.

Henley Royal Regatta is a Rowing event held annually on the River Thames by the town of Henley-on-Thames, England. It was established on 26 March 1839. It differs from the three other regattas rowed over approximately the same course, Henley Women's Regatta, Henley Masters Regatta, and Henley Town and Visitors' Regatta, each of which is an entirely separate event.

Shiplake consists of 3 settlements: Shiplake, Shiplake Cross and Lower Shiplake. Together these villages form a civil parish situated beside the River Thames 2 miles (3 km) south of Henley-on-Thames, Oxfordshire, England. The river forms the parish boundary to the east and south, and also the county boundary between Oxfordshire and Berkshire. 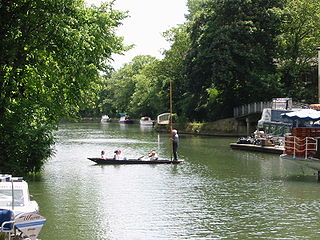 "The Isis" is an alternative name for the River Thames, used from its source in the Cotswolds until it is joined by the Thame at Dorchester in Oxfordshire. It derives from the ancient name for the Thames, Tamesis, which in the Middle Ages was falsely assumed to be a combination of "Thame" and "Isis". Notably, the Isis flows through the city of Oxford.

Phyllis Court is a private members club in Henley-on-Thames, Oxfordshire, England, situated by the River Thames.

Fawley Court is a country house, with large mixed-use grounds standing on the west bank of the River Thames at Fawley in the English county of Buckinghamshire. Its former deer park extended east into the Henley Park area of Henley-on-Thames, Oxfordshire that abuts it to the south. Following World War II, it was run as Divine Mercy College by the Polish Congregation of Marian Fathers, with its associated library, museum and was one of the cultural centres for the Polish minority in the United Kingdom until its closure and sale in the 2009. It is listed at Grade I for its architecture.

Temple Island is an eyot in the River Thames in England just north (downstream) of Henley-on-Thames, Oxfordshire. The island is on the reach above Hambleden Lock between the Buckinghamshire and Berkshire banks, and is part of Remenham in Berkshire. The main significance of the island is that it lies at the start of the course for Henley Royal Regatta.

Henley Bridge is a road bridge built in 1786 at Henley-on-Thames over the River Thames, between Oxfordshire and Berkshire. The bridge has five elliptical stone arches, and links Hart Street in Henley with White Hill leading up a steep hill to Remenham Hill. It crosses the Thames on the reach between Hambleden Lock and Marsh Lock, carrying the Thames Path across the river. It is a Grade I listed building.

Remenham is a village and civil parish on the Berkshire bank of the River Thames opposite Henley-on-Thames in southern England.

The Princess Royal Challenge Cup is a rowing event for women's single sculls at the annual Henley Royal Regatta on the River Thames at Henley-on-Thames in England. It is open to all eligible female scullers.

Maidenhead Rowing Club is a rowing club, on the River Thames in England at Maidenhead, Berkshire.

Henley Park is a country house and landscape garden in Bix and Assendon civil parish in the Chiltern Hills of South Oxfordshire, England. The house is about 1.5 miles (2.4 km) north of Henley-on-Thames. The park adjoins the county boundary with Buckinghamshire. 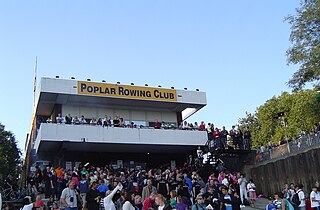 Poplar Blackwall and District Rowing Club is a rowing club in Millwall, on the River Thames in England, on the northern bank of the Thames opposite Greenwich on the Isle of Dogs, London.

Sambrooke Freeman FRSA was a member of the prominent Freeman family of Fawley Court near Henley-on-Thames, England. He was a Member of Parliament, for Pontefract in Yorkshire from 1754–61 and Bridport in Dorset from 1768–74.

University College London Boat Club (UCLBC) is a rowing club on the River Thames, based at Hartington Road, Chiswick.

Highmoor is a village and civil parish in the Chiltern Hills in Oxfordshire, about 4 miles (6.4 km) west of Henley-on-Thames. The parish includes the hamlet of Satwell.