Berg became a manager in 2005 with Lyn and then Lillestrøm. He returned to Blackburn as manager in 2012, but was sacked after just 57 days in the post, overseeing 10 games including only one victory. In January 2014, he became the new coach of Legia Warsaw.

Born in Eidsvoll, Berg played for Vålerenga and Lillestrøm before coming to England. Blackburn Rovers manager Kenny Dalglish attended a match between England and Norway at Wembley on 14 October 1992 to scout Tore Pedersen, but Pedersen was injured during the match and replaced by Berg. Dalglish was so impressed with Berg that he later offered him a contract. [4] Berg joined Blackburn in January 1993 for £400,000. [5]

Berg made his debut for Blackburn on 2 February 1993, coming on as a substitute in a 2–1 Premier League home defeat to Crystal Palace. [6] He soon made the right-back position his own in the Rovers side and played a vital role in Blackburn's successful title-winning season under manager Kenny Dalglish in 1994–95, missing only two games throughout the season. Also a competent centre-back, Berg's versatility and consistent performances for Blackburn earned him a move to Manchester United in 1997 for a fee of £5 million – at the time the joint-highest fee ever paid for a defender by a British club. [7] [8]

Berg had supported Manchester United as a boy and manager Alex Ferguson had first wanted to sign Berg for United nine years earlier when he was a teenager, but the move fell through because United could not obtain a work permit. [9] Berg was a regular choice in the Manchester United line-up during the 1997–98 season, but the arrival of Jaap Stam in July 1998 meant he was restricted to just 16 Premier League appearances in 1998–99 as the team won the Treble of the Premier League, the FA Cup and the UEFA Champions League. Berg missed the 1999 FA Cup Final and the 1999 UEFA Champions League Final through injury, [8] but still picked up a medal for both, having been involved in most of the team's matches on the way to the final. With the league title in 1999, Berg became the first player to win the Premier League with two clubs, [10] a feat he would be alone with until 2010, when it was matched by Ashley Cole and Nicolas Anelka. Gael Clichy, Kolo Touré, Carlos Tevez, Robert Huth, N'Golo Kanté and Riyad Mahrez have all since matched the feat as well. [11] Berg regained his place in the side during the 1999–2000 season, when Ronny Johnsen was injured.

Berg rejoined Blackburn Rovers in September 2000, initially on loan for three months, before securing a permanent transfer under manager Graeme Souness. Rovers were promoted back to the Premier League in 2000–01. Further success followed for Berg in the following season, when Blackburn won the League Cup, beating Tottenham Hotspur 2–1 at the Millennium Stadium in Cardiff, with Berg lifting the trophy as captain. [12]

Berg later moved on from Blackburn and had a season at the Scottish club Rangers in 2003–04, where he played his last game professionally.

At international level, Berg was part of the Norwegian national team at the 1994 and 1998 FIFA World Cups, as well as Euro 2000. He made his debut for Norway in a friendly against the Faroe Islands in May 1992 and earned a total of 100 caps over a period of 12 years, scoring nine goals. [13] His final international match was a friendly against Wales in May 2004, in which he was substituted early on by Claus Lundekvam to mark the end of his Norway career.

On 22 April 2005, Berg was appointed manager of Lyn at the age of 35, signing a four-year contract with the Oslo side. His first game with Lyn was against Start two days later, getting a 1–1 draw, followed by a 6–1 win against Molde the next week. Lyn finished third that season.

On 19 August 2008, Lyn announced that Berg had accepted an offer from Lillestrøm, where he had last played in 1992. He signed a five-year contract and took over as head coach on 21 October 2008. On 27 October 2011, Berg was sacked three matches before the end of the season as investor Per Berg promised fresh funds for acquiring quality players after the season.

While working as a pundit for Norwegian TV, Berg had made a withering assessment of Blackburn Rovers' owners, Venky's. He said: "There are no real managers with credibility who would accept a job like that." [14] On 31 October 2012, Blackburn Rovers announced that Berg had accepted an offer for a three-year contract to manage the club. [3] He became Blackburn's first foreign manager. Berg said of his previous comments about the club's owners, Venky's: "That was me looking at it from the outside without knowing really what was going on in the inside. I think this club at the moment is going in the right direction." [14]

On 14 February 2013, the LMA lodged legal proceedings to the high court against Blackburn Rovers for non-payment of wages to Berg.

Since leaving Blackburn Rovers, Berg has worked as a scout on an informal basis for Norwich City, looking at matches in both England and Germany. [18]

On 19 December 2013 it was announced that he will be new manager of Legia Warsaw starting from 1 January 2014. [19] In his first full season as coach, he led the team to the Polish Ekstraklasa title. On 5 October 2015 he was sacked while sitting second in the league, following a 2-2 draw against Górnik Zabrze. [20]

On 5 May 2016 Berg signed a 2-year contract with Székesfehérvár-based Hungarian League club Videoton FC. [21] [22] He was sacked at the end of the season despite having been a contender for the title until the last matchday. [23]

Ole Gunnar Solskjær KSO is a Norwegian professional football manager and former player who played as a Striker. He is the current manager of Premier League club Manchester United. 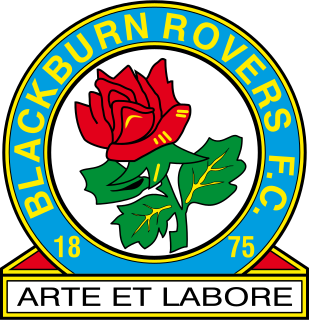 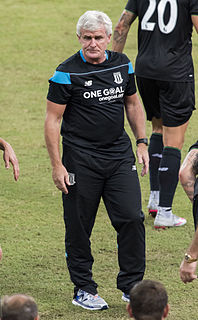 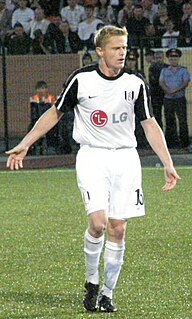 Paul William Robinson is an English former professional footballer who played as a goalkeeper in the Premier League and Football League for Leeds United, Tottenham Hotspur, Blackburn Rovers and Burnley. He is a former England international, earning 41 caps between 2003 and 2007.

David May is an English former professional footballer who played as a centre-back and right-back from 1988 to 2006.

Gunnar Halle is a Norwegian football manager and former player who played as a right back. He is the current assistant coach of Strømmen. Halle is best known for his playing spells at Oldham Athletic and Leeds United, followed by his brief managerial spell at Lyn Oslo. 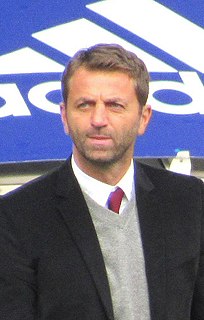 The 2000–01 season was Manchester United's ninth season in the Premier League, and their 26th consecutive season in the top division of English football. United won the Premier League for the third successive season and the seventh time since its inauguration in 1993. They were less successful in cup competitions, going out in the fourth round of the FA Cup, the fourth round of the League Cup and the quarter-finals of the Champions League. 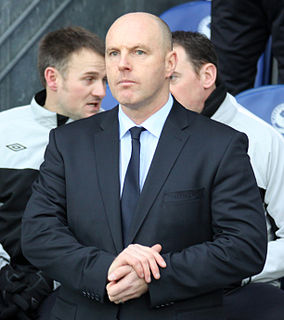 Stephen Kean is a Scottish football manager and former player who is currently interim head coach at Melbourne Victory. A winger, he spent his playing career in the lower divisions of Scottish, English and Portuguese leagues in the 1980s and 1990s, before moving into coaching. After a 21-month spell in charge of Blackburn Rovers, he resigned on 28 September 2012.

Joshua Christian Kojo King is a Norwegian professional footballer who last played as a forward for Premier League club Everton and the Norway national team.

Gary David Bowyer is an English professional football coach and former professional player who is head coach of Salford City. As a player, he made 52 league appearances in a professional career that lasted eight years, before retiring due to injury in 1997, aged 25. He went on to coach at a number of clubs, and has managed Blackburn Rovers, Blackpool, Bradford City and is currently manager of League Two side Salford City in his second spell.

The 2012–13 season was Blackburn Rovers' 125th season as a professional football club. It was their first season back in the Football League Championship after an 11-year run in the Premier league English football.