Henri Édouard Prosper Breuil (28 February 1877 – 14 August 1961), often referred to as Abbé Breuil, was a French Catholic priest and member of the Society of Jesus, archaeologist, anthropologist, ethnologist and geologist. He is noted for his studies of cave art in the Somme and Dordogne valleys as well as in Spain, Portugal, Italy, Ireland, China with Teilhard de Chardin, Ethiopia, British Somali Coast Protectorate, and especially Southern Africa.

Breuil was born at Mortain, Manche, France, and was the son of Albert Breuil, magistrate, and Lucie Morio De L'Isle. [1]

He received his education at the Seminary of St. Sulpice and the Sorbonne and was ordained in 1900 but was given permission to pursue his research interests. He was a man of deep religious faith [2] and learning. In 1904 Breuil had recognised that a pair of 13,000-year-old carvings of reindeer at the British Museum were in fact one composition. [3] He assumed a post as lecturer at the University of Fribourg in 1905, and in 1910 became professor of prehistoric ethnology in Paris and at the Collège de France from 1925. [4]

Breuil was a competent draughtsman, faithfully reproducing the cave paintings he encountered. In 1924 he was awarded the Daniel Giraud Elliot Medal from the National Academy of Sciences. [5] He published many books and monographs, introducing the caves of Lascaux and Altamira to the general public and becoming a member of the Institut de France in 1938.

Breuil visited the Peking Man excavations at Zhoukoudian, China in 1931 and confirmed the presence of stone tools at the site.

In 1929, when already a recognised authority on North African and European Stone Age art, he attended a congress on prehistory in South Africa. At the invitation of prime minister Jan Smuts he returned there in 1942 and took up a chair at Witwatersrand University from 1944 to 1951. During his South African stay he studied rock art in Lesotho, the eastern Free State and in the Natal Drakensberg. He undertook three expeditions to South West Africa and Rhodesia between 1947 and 1950. He described this period as "the most thrilling years of my research life". He had excursions to South West Africa and Bechuanaland with a local Archeologist Kosie Marais. In 1953 he announced his discovery of a painting about 6 000 years old, subsequently dubbed The White Lady , under a rock overhang in the Brandberg Mountain.

Breuil returned to France in 1952 and produced a series of publications sponsored by the South African Government. Breuil's books contain valuable photographs and sketches of the art works at the sites he visited but are marred by official South African racism. Breuil developed elaborate scenarios to attribute "white" authorship to the paintings he studied. For example, he had a theory that the beautiful painting known as "The White Lady of the Brandberg" had been painted by Egyptians (or some other Mediterranean people), who had improbably made their way thousands of miles southwest into the wilds of Namibia, rather than accepting the logical and fairly obvious fact that the paintings were the product of (and clearly represent the lifestyle of) the Bushmen and other native peoples of Namibia and South Africa.

His contributions to European and African archaeology were considerable and recognised by the award of honorary doctorates from no fewer than six universities.

His works in English include: 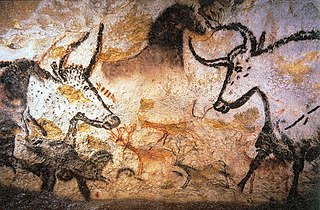 Lascaux is the setting of a complex of caves near the village of Montignac, in the department of Dordogne in southwestern France. Over 600 parietal wall paintings cover the interior walls and ceilings of the cave. The paintings represent primarily large animals, typical local and contemporary fauna that correspond with the fossil record of the Upper Paleolithic time. The drawings are the combined effort of many generations, and with continued debate, the age of the paintings is estimated at around 17,000 years. Lascaux was inducted into the UNESCO World Heritage Sites list in 1979, as an element of the Prehistoric Sites and Decorated Caves of the Vézère Valley. 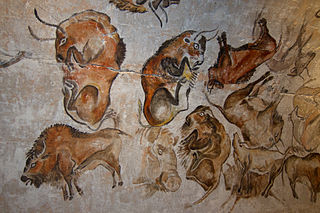 Cave paintings are a type of parietal art, found on the wall or ceilings of caves. The term usually implies prehistoric origin, but cave paintings can also be of recent production: In the Gabarnmung cave of northern Australia, the oldest paintings certainly predate 28,000 years ago, while the most recent ones were made less than a century ago. 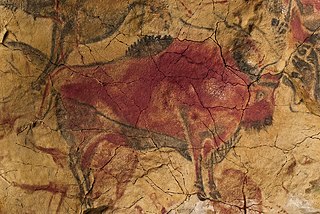 The Cave of Altamira is a cave complex, located near the historic town of Santillana del Mar in Cantabria, Spain. It is renowned for prehistoric parietal cave art featuring charcoal drawings and polychrome paintings of contemporary local fauna and human hands. The earliest paintings were applied during the Upper Paleolithic, around 36,000 years ago. The site was discovered in 1868 by Modesto Cubillas.

The Magdalenian cultures are later cultures of the Upper Paleolithic and Mesolithic in western Europe. They date from around 17,000 to 12,000 years ago. It is named after the type site of La Madeleine, a rock shelter located in the Vézère valley, commune of Tursac, in France's Dordogne department.

Parietal art is a term in archaeology for art created in caves, the definition usually extended to art in rock shelters under cliff overhangs. Popularly, it is called "cave art", and is a subset of the wider term rock art. It is mostly on rock walls, but may be on ceilings and floors. A wide variety of techniques have been used. The term is usually applied only to prehistoric art, but it can be used for art of any date. Sheltered parietal art has had a far better chance of surviving for very long periods, and what now survives may represent only a very small proportion of what was created.

Sympathetic magic, also known as imitative magic, is a type of magic based on imitation or correspondence.

The Sorcerer is one name for an enigmatic cave painting found in the cavern known as 'The Sanctuary' at the Cave of the Trois-Frères, Ariège, France, made around 13,000 BC. The figure's significance is unknown, but it is usually interpreted as some kind of great spirit or master of animals. The unusual nature of The Sanctuary's decoration may also reflect the practice of magical ceremonies in the chamber. In his sketches of the cave art, Henri Breuil drew a horned humanoid torso and the publication of this drawing in the 1920s influenced many subsequent theories about the figure. However, Breuil's sketch has also come under criticism in recent years. A single prominent human figure is unusual in the cave paintings of the Upper Paleolithic, where the great majority of representations are of animals.

Émile Cartailhac was a French prehistorian, one of the founding fathers of the studies of the cave art. He is perhaps best remembered because of his involvement with the Altamira paintings.

Font-de-Gaume is a cave near Les Eyzies-de-Tayac-Sireuil in the Dordogne départment of south-west France. The cave contains prehistoric polychrome cave paintings and engravings dating to the Magdalenian period. Discovered in 1901, more than 200 images have been identified in Font-de-Gaume. 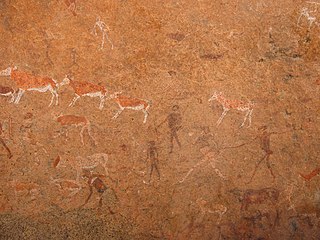 The White Lady is a rock painting, located on a panel, also depicting other art work, on a small rock overhang, deep within Brandberg Mountain. The giant granite monolith located in Damaraland and called 'The Brandberg' is Namibia's highest mountain. The painting's German name is Weiße Dame.

Henri Lhote was a French explorer, ethnographer, and discoverer of prehistoric cave art. He is credited with the discovery of an assembly of 800 or more works of primitive art in a remote region of Algeria on the edge of the Sahara desert.

The Cave of Niaux is located in the Niaux commune, Ariège département in south-western France as part of a wider geological system that includes the Sabart Cave and Lombrives Cave in the hill of Cap de la Lesse de Bialac. The Niaux cave's system is complex and has a combined length of more than 14 km (8.70 mi) of underground passages and chambers. An archaeological site with a documented history of Paleo-human presence, Niaux contains numerous distinct areas and galleries of carefully drawn and vivid wall paintings, executed in a black-outlined style typical of the classic Magdalenian period, between 17,000 and 11,000 years ago. 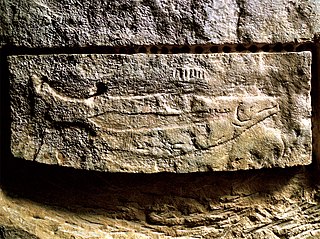 The Swimming Reindeer is the name given to a 13,000-year-old Magdalenian sculpture of two swimming reindeer conserved in the British Museum. The sculpture was made in what is now modern-day France by an unknown artist who carved the artwork from the tip of a mammoth tusk. The sculpture was found in two pieces in 1866, but it was not until the early 20th century that Abbé Henri Breuil realised that the two pieces fit together to form a single sculpture of two reindeer swimming nose-to-tail. 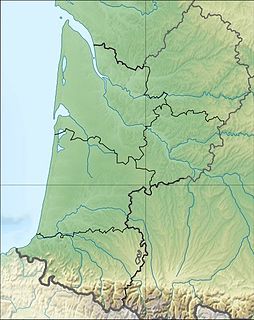 Les Combarelles is a cave in Les Eyzies de Tayac, Dordogne, France, which was inhabited by Cro-Magnon people between approximately 13,000 to 11,000 years ago. Holding more than 600 prehistoric engravings of animals and symbols, the two galleries in the cave were crucial in the re-evaluation of the mental and technical capabilities of these prehistoric humans around the turn of the last century.

The Villars Cave, in French Grotte de Villars or Grotte du Cluzeau, was occupied during the Lower Magdalenian by Cro-Magnon hunter-gatherers. The cave is part of the French commune of Villars in the northern Dordogne département. Besides its enormous wealth in beautiful stalactites, stalagmites and similar calcite deposits it contains cave paintings and some engravings. The Villars Cave and the Rouffignac Cave are the biggest known cave systems in the Dordogne.

The Caves of Gargas in the Pyrenees region of France are known for their cave art from the Upper Paleolithic period - about 27,000 years old.

Finding Altamira is a 2016 Spanish biographical drama film starring Antonio Banderas, and directed by Hugh Hudson. It is Hudson's first fiction film since I Dreamed of Africa in 2000.