Henry Augustus Pilsbry (7 December 1862 – 26 October 1957) was an American biologist, malacologist and carcinologist, among other areas of study. He was a dominant presence in many fields of invertebrate taxonomy for the better part of a century. [2] [3] For much of his career, his authority with respect to the classification of certain substantial groups of organisms was unchallenged: barnacles, [4] [5] chitons, [6] [7] North American terrestrial mollusks, [8] [9] [10] [11] and others.

Pilsbry (frequently misspelled Pilsbury) spent his childhood and youth in Iowa. He was called "Harry" Pilsbry then, and developed an early fascination with the limited variety of mollusks he was able to find. He attended the University of Iowa, and received the Bachelor of Science degree there in 1882, but did not immediately find employment in his field of interest. Instead, Henry Pilsbry worked for publishing firms and newspapers for the next several years, but devoted most of his spare time to the study of mollusks.

In 1887, he found employment in New York City as a proofreader, but soon met George Washington Tryon, the resident expert on mollusks at the Academy of Natural Sciences of Philadelphia, and architect and author of the ongoing multi-volume Manual of Concology. This meeting led, within a few months, to Tryon's hiring Pilsbry as an assistant. He was, no doubt, impressed by the young man's talents as a proofreader, considerable expertise in technical illustration, and especially by his undeniable enthusiasm for the study of mollusks and substantial knowledge of the subject.

Less than three months after Pilsbry began his new job, George Tryon died and his new assistant, only 25 years old, perhaps to the surprise of some, inherited the titles of "Conservator of the Conchology Section" and "Editor" of the Manual of Conchology .

Pilsbry soon proved capable of prodigious efforts, and his scientific output was remarkable. During the next five years he produced hundreds of detailed pages of the Manual of Conchology, preparing many of the plates himself, and founded The Nautilus , an influential journal of malacology which has survived into the 21st century. [12] He also married during this period, to Adeline Avery. His college, the University of Iowa, honored him with a Doctor of Science degree in 1899 (and he later received two other honorary doctorates: University of Pennsylvania, 1940, and Temple University, 1941). In 1929 he participated in the Pinchot South Sea Expedition. Pilsbry was the first president of the American Malacological Union (Society) founded in 1931. [13]

For almost all of the next 57 years of his long life, Henry Pilsbry spent his hours writing scientific papers, over 3,000 of them, mostly while at the Academy of Natural Sciences. Most of his longest papers were published by the Academy. The shorter ones could usually be found in The Nautilus. The large majority of his work carried only his name, although there were sometimes joint or junior authors, some of whom were more patron than scientist. It is notable that Pilsbry did not always confine himself to the several areas of study with which he was already closely associated, but rather would sometimes stray into other fields of science, from geology and paleontology to the taxonomy of brachiopods. [14] [15] [16]

His field work provided a steady supply of new specimens for study, dissection, and illustration, and a seemingly endless array of new species to name. Pilsbry named 5680 organisms; [17] a full list was published in a 218-page volume. [18] Pilsbry performed extensive amounts of field work, and was clearly an expert in dealing with the outdoors, no matter the conditions. He collected mollusks over virtually the entire United States, and in an atlas of countries: Argentina, Australia, Bahamas, Cocos Islands, Cuba, Galapagos Islands, Guatemala, Marquesas Islands, Mexico, Panama, Peru, and other locations as well. His intellectual reach extended even further, through joint efforts with other workers: especially notably Africa with Joseph Bequaert and the Japanese region with Yoichiro Hirase.

Pilsbry suffered a heart attack in late 1957 while working at the Philadelphia Academy. He seemed to recover from this serious occurrence, but died at his winter home in Florida, about a month and a half later, from a similar event.

A species of Cuban dwarf boa, Tropidophis pilsbryi , is named in his honor. [19]

A species of mollusk, Tethys pilsbyi, was named in his honor by a former student and malacologist, Elizabeth "Jennie" Letson. [20]

Pilsbry was an assistant was of George Washington Tryon for two years, from 1887 to 1888. After Tryon's death in 1888, Pilsbry became an editor of an ongoing multi-volume Manual of Conchology. He is credited (at title page) in Manual of Conchology since volume 12 from 1890.

James Henry Ferriss (1849-1926) was an American politician and amateur conchologist. According to Henry Augustus Pilsbry, Ferriss was "the fore-most of American landshell collectors... as a collector he has probably never been surpassed."

Polygyridae is a family of air-breathing land snails, terrestrial pulmonate gastropod mollusks in the superfamily Helicoidea. 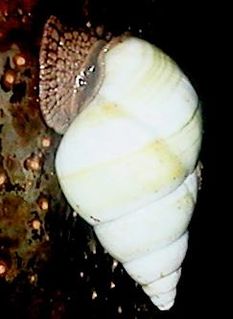 Giffordius is a genus of air-breathing land snails, terrestrial pulmonate gastropod mollusks in the family Polygyridae.

Allogona is a genus of air-breathing land snails, terrestrial pulmonate gastropod mollusks in the family Polygyridae. 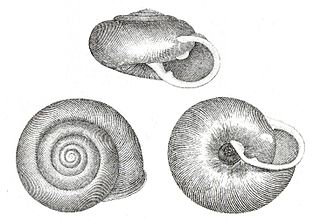 Webbhelix is a genus of North American land snails, terrestrial pulmonate gastropod mollusks in the family Polygyridae. The genus contains several taxa which were previously included under the name Triodopsis multilineata. 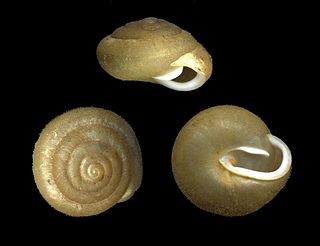 Praticolella is a genus of air-breathing land snails, terrestrial pulmonate gastropod mollusks in the family Polygyridae.

Linisa is a genus of air-breathing land snails, terrestrial pulmonate gastropod mollusks in the subfamily Polygyrinae of the family Polygyridae. 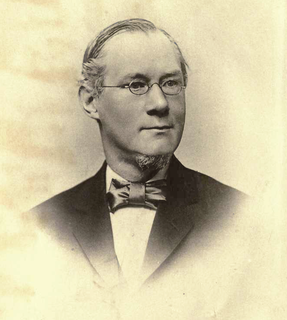 George Washington Tryon Jr. was an American malacologist who worked at the Academy of Natural Sciences in Philadelphia.

Tokubei Kuroda was a Japanese scientist and academic. He is best known as a pioneering taxonomist and malacologist specializing in Japanese marine and terrestrial Mollusca.

Carinodrillia adonis is a species of sea snail, a marine gastropod mollusk in the family Pseudomelatomidae.

Calliostoma pulchrum, common name the beautiful top shell, is a species of sea snail, a marine gastropod mollusk in the family Calliostomatidae. 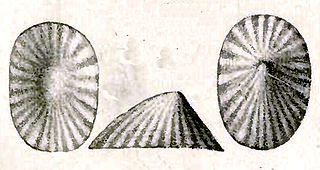 Broderipia is a genus of sea snails, marine gastropod mollusks in the family Trochidae, the top snails.

Zachrysia is a genus of air-breathing land snails, terrestrial pulmonate gastropod mollusks in the family Zachrysiidae

Yoichirō Hirase was a Japanese malacologist and business man. His son, Shintarō Hirase, (1884-1939) was also a malacologist. The majority of his collection of molluscs were destroyed during World War II.

Gary Rosenberg is an American malacologist. 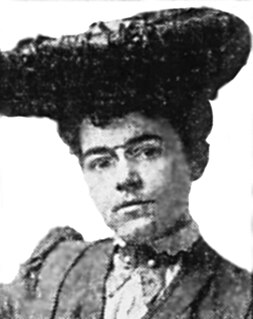 Elizabeth Letson Bryan was one of the first American women to be a director of a museum. She was a noted American malacologist.