Robinson was born in Bury St. Edmunds, Suffolk, third and youngest son of Henry Robinson (1736-1815) and Jemima (1736-1793), daughter of Denny Crabb, a landowner, maltster, and deacon of the congregational church at Wattisfield, Suffolk, and sister of Habakkuk Crabb. [2] After education at small private schools, he was articled in 1790 to an attorney in Colchester. At Colchester he heard John Wesley preach one of his last sermons. In 1796, he entered the office of a solicitor in Chancery Lane, London; but in 1798 a relative died, leaving Robinson a sum yielding a considerable yearly income. Proud of his independence and eager for travel, he went abroad in 1800. Between 1800 and 1805, he studied at various places in Germany, meeting men of letters there, including Goethe, Schiller, Johann Gottfried Herder and Christoph Martin Wieland. He then became correspondent for The Times in Altona in 1807. Later on he was sent to Galicia, in Spain, as a war correspondent in the Peninsular War. [3]

On his return to London in 1809, Robinson decided to quit journalism and studied for the Bar, to which he was called in 1813, and became leader of the Eastern Circuit. Fifteen years later he retired, and by virtue of his conversation and qualities became a leader in society. He was one of the founders of the London University (now University College London) [4] and travelled several times to Italy, as many of his contemporaries did. Among those whom he befriended in Rome in 1829 was the novelist Sarah Burney.

Robinson died unmarried, aged 91. He was buried in a vault in Highgate Cemetery alongside his friend Edwin Wilkins Field. [5] A bust of Crabb Robinson was made, and a portrait by Edward Armitage. [6]

Robinson's Diary, Reminiscences and Correspondence was published posthumously in 1869. [7] It contains reminiscences of central figures of the English romantic movement: including Coleridge, Charles Lamb, William Blake, William Wordsworth, and of other writers such as Sarah Burney. They are documents on the daily lives of London writers, artists, political figures and socialites. In his essay on Blake, Swinburne says, "Of all the records of these his latter years, the most valuable, perhaps, are those furnished by Mr. Crabb Robinson, whose cautious and vivid transcription of Blake's actual speech is worth more than much vague remark, or than any commentary now possible to give." [8]

In 1829, Robinson was made a fellow of the Society of Antiquaries (F.S.A.), and contributed a paper to Archæologia entitled "The Etymology of the Mass". [6]

His diaries were bequeathed to Dr Williams's Library, because Robinson had been a member of the Essex Street Chapel, the first avowedly Unitarian congregation in England.

Hester Lynch Thrale Piozzi, a Welsh-born diarist, author and patron of the arts, is an important source on Samuel Johnson and 18th-century English life. She belonged to the prominent Salusbury family, Anglo-Welsh landowners, and married first a wealthy brewer, Henry Thrale, then a music teacher, Gabriel Mario Piozzi. Her Anecdotes of the Late Samuel Johnson (1786) and her diary Thraliana, published posthumously in 1942, are the main works for which she is remembered. She also wrote a popular history book and a dictionary. She has been seen as a protofeminist.

William Stewart Rose (1775–1843) was a British poet, translator and Member of Parliament, who held Government offices. From a Tory background, he was well-connected in the political and literary world, and made a mark by his championing of Italian poets and a burlesque style of verse based on their influence as satirists. 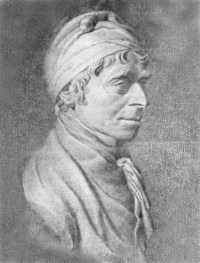 James Burney was an English rear-admiral, who accompanied Captain Cook on his last two voyages. He later wrote two books on naval voyages and a third on the game of whist.

Henry Machyn was an English clothier and diarist in 16th century London.

Charles Valentine Le Grice (1773–1858) was an Anglican priest, an associate of Charles Lamb and Samuel Taylor Coleridge, a squib writer, and a translator of Longus.

Sarah Harriet Burney was an English novelist, the daughter of musicologist and composer Charles Burney, and half-sister of the novelist and diarist Frances Burney. She had some intermittent success with her novels.

Henry Sass was an English artist and teacher of painting, who founded an important art school, Sass's Academy, in London, to provide training for those seeking to enter the Royal Academy. Many distinguished British painters received their early training here. Such was Sass's commitment to art education that Sir David Wilkie said he could have "taught a stone to draw".

Thomas Twining was an English classical scholar and cleric.

John Collett Ryland (1723–1792) was an English Baptist minister and author.

The Aldersgate Medical School was a medical school in east London, in existence from about 1825 to 1848. One of many private medical schools of the period, it had popular lecturers on its staff, and proved a serious rival to St. Bartholomew's Hospital as a teaching institution.

Thomas Sadler (1822–1891) was an English Unitarian minister and writer.

Samuel Williams was a British draughtsman and wood-engraver.

Wikisource has original works by or about:
Henry Crabb Robinson
This page is based on this Wikipedia article
Text is available under the CC BY-SA 4.0 license; additional terms may apply.
Images, videos and audio are available under their respective licenses.