Henry Fairfax (1634–1702) was an English clergyman and academic, Dean of Norwich after the Glorious Revolution.

He was senior fellow of Magdalen in 1687, when James II endeavoured to force on the college a president of his own choosing. Fairfax signed the petition to the king (9 April 1687) begging him to cancel his decree ordering the fellows to elect Anthony Farmer. When that appeal failed he voted for a second petition to the same effect (15 April), and on 17 April took a prominent part in electing John Hough to the presidency. With his colleagues he wrote to James Butler, 1st Duke of Ormonde (19 April), asking for his intervention with the king. On 6 June he was summoned before the court of high commission at Whitehall. On 13 June he was brought before George Jeffreys, president of the court, protested against the proceedings, denied their legality, and declined to sign any answer to the charges brought against him. Jeffreys abused him, and told him he was fit for a madhouse.

On 22 June 1687 the high court commissioners suspended Fairfax from his fellowship; but he disputed the validity of the act, and still resided in the college. When the royal commissioners first visited Magdalen on 20 October Fairfax absented himself, although he was in Oxford, whereupon he was pronounced contumacious (31 October) He appeared before the commissioners next day, and denied the right of the king's new nominee, Samuel Parker, to act as president. He would appeal, he said, to the court of king's bench, and with another fellow, Thomas Stafford, signed a protest against the proceedings of the Oxford visitors. On being warned of its dangers he withdrew the document; but he was finally expelled the college and his name struck off the books (25 October). On 11 November his fellowship was filled up. On 22 December he was included in the decree which disqualified all the expelled fellows of Magdalen from holding any ecclesiastical benefice.

After the abdication of James II Fairfax was restored to his fellowship (26 October 1689). A year later (23 October 1689) he was rewarded with the deanery of Norwich, and he died there on 2 May 1702, aged 68, being buried in the cathedral. The tomb is by William Stanton. [2]

He is one of the persons credited with the authorship of An Impartial Relation of the whole proceedings against St. Mary Magdalen Colledge in Oxon.... in 1687 (1688), usually claimed for Charles Aldworth, vice-president of the college. 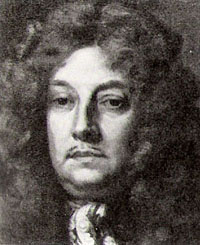 Francis Newport, 1st Earl of Bradford PC, styled The Honourable between 1642 and 1651, was an English soldier, courtier and Whig politician.

Anthony Farmer was an Englishman nominated by King James II to the office of President of Magdalen College, Oxford, in 1687.

John Hough was an English bishop. He is best known for the confrontation over his election as President at Magdalen College, Oxford that took place at the end of the reign of James II of England.

Sir John Lisle was an English lawyer and politician who sat in the House of Commons at various times between 1640 and 1659. He supported the Parliamentarian cause in the English Civil War and was one of the regicides of King Charles I of England. He was assassinated by an agent of the crown while in exile in Switzerland.

Sir Thomas Jenner (1637–1707) was an English barrister, Baron of the Exchequer and Justice of the Common Pleas, closely associated with the Stuart kings Charles II and James II of England.

Gilbert Ironside the younger was an English churchman and academic, Warden of Wadham College, Oxford, from 1667, Bishop of Bristol and Bishop of Hereford.

Sir Anthony Morgan (1621–1668) was an English Royalist politician and soldier. In the English Civil War he was first a Royalist captain and then in 1646 changed sides and joined the Parliamentary army. He was a captain in Ireton's horse (cavalry) in Ireland in 1649 and had risen to the rank of major by 1662. He was a Member of Parliament for the Irish constituency of Wicklow and Kildare in the parliaments of 1654 to 1658, and represented the Irish constituency of Meath and Louth in 1659. The Lord Protector Oliver Cromwell knighted him in 1656 and after the Restoration, he was also knighted by King Charles II in 1660. He was a commissioner of the English auxiliaries in France and an original member of the Royal Society in 1663.

Sir Francis Warre, 1st Baronet, of Hestercombe House, Kingston, Somerset, was a British landowner and Tory politician who sat in the English and British House of Commons between.1685 and 1715.

Thomas King was an English professional soldier, lieutenant governor of Sheerness, Kent, and Member of Parliament for Queenborough, in Kent.